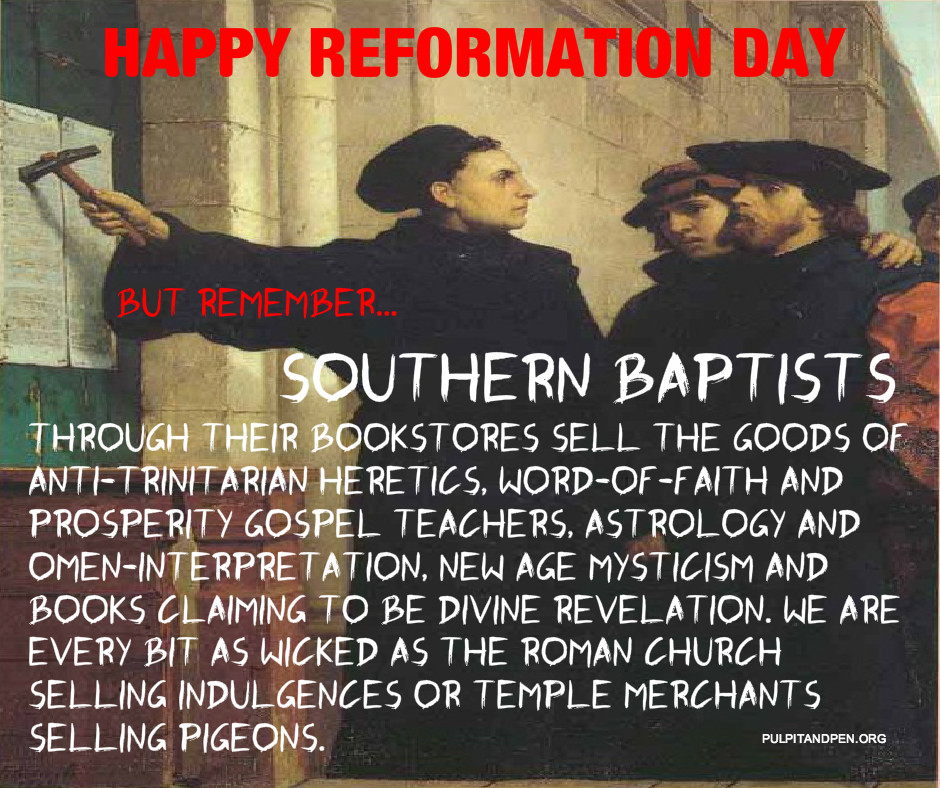 To repress these very sharp arguments of the laity by force alone, and not to resolve them by giving reasons, is to expose the church and the pope to the ridicule of their enemies and to make Christians unhappy. – #90, Martin Luther 95 Theses

And so, the while-yet still very much Catholic, Martin Luther, penned the 95 Theses and nailed it to the church in Wittenberg 499 years ago today (listen to my sermon about that topic and justification by faith here). Luther, who could not believe that his church would monetize the pure religion of Christ, later grew to understand Sola Fide and provide an even-bolder defense of the truth (and on weightier matters) than what was presented in the 95 Theses.

Five centuries later, and Protestants have by and large stopped protesting. Head SBC ethicist, Russell Moore, says he’s unsure of the differences in Gospel focus between himself and the Pope (source link). Moore also went to the Vatican earlier this year, and did little more to protest than discreetly hold up a card that said “95 Theses” when no one was looking (source link), and partnered with the Pope in a book collaboration (source link). Southern Baptist, Rick Warren (who was the keynote speaker at the 2014 SBC Pastor’s Conference), spoke with the Pope in Philadelphia (source link) and referred to the Pope as “Holy Father” and “Our Pope” last year (source link). Ed Stetzer has partnered up with a Catholic Priest in speaking engagements as well (source link).

The fact that Southern Baptists and other evangelicals are partnering with, speaking with, and praising the Pope – unlike our Protestant forbears who were burned at the stake by the Pope and accused him of being an antichrist – isn’t because the Pope or Catholicism has somehow changed over the years. Their anti-Gospel convictions are still enshrined in the Council of Trent and they still sell indulgences for various kinds of good deeds. And yet, for some inexplicable reason, Southern Baptist have a high appreciation for Luther’s bravery in protesting the merchandizing of religion while being – as a denomination, through their bookstores – the worst peddlers of theological poison in modern day.

Lifeway Christian Resources, owned by the Southern Baptist Convention, has sold Heaven Tourism stories for years – and their executives, Thom Rainer and Ed Stetzer – continued selling The Boy Who Came Back From Heaven for six months after being told explicitly and directly by Justin Peters the book was recanted by its author – a young man, Alex Malarkey. We released those emails to prove it (source link). Only after being scolded by young Alex in an open letter released through Pulpit & Pen, that became the biggest news story in the world on January 17 of this year, did Lifeway pull Heaven Tourism (source link). These Lifeway executives then lied and told the press they had just heard about Malarkey’s recantation (source link). After “making bank” for years on Alex’ book, Stetzer and Rainer still have not responded to this young man (who is severely disabled) and his letter (source link). The Baptist “Press” has insulated Thom Rainer and Ed Stetzer, being perhaps the only news outlet not to report the facts of this (source link).

After becoming the object of scorn around the world when Alex Malarkey penned his open letter to Lifeway, their executives (laughably) told the SBC messengers in June that they had “been too focused on what they should not sell and will focus in the future on what they should sell.” All of the above list of poison is a product of Lifeway “caring too much” about what they shouldn’t sell? Lifeway is a den of thieves, liars, and nepotism-enabled petulant celebrity sons.

To put it lightly, Lifeway and its executives are the Johan Tetzel of American evangelicalism. That’s why when I see Ed Stetzer talk about celebrating Reformation Day, it makes me sick…

The only thing that should be nailed to Stetzer’s door is Alex Malarkey’s open letter.

No, Ed. Sit down. This is not your day. You are not the Protestant, in this scenario, Ed. You are Tetzel. Lifeway is the Pope. Lifeway is the very reason why we need Semper Reformanda more than ever.

And, Southern Baptists celebrating Reformation Day, let’s start with Reforming our own bookstore. 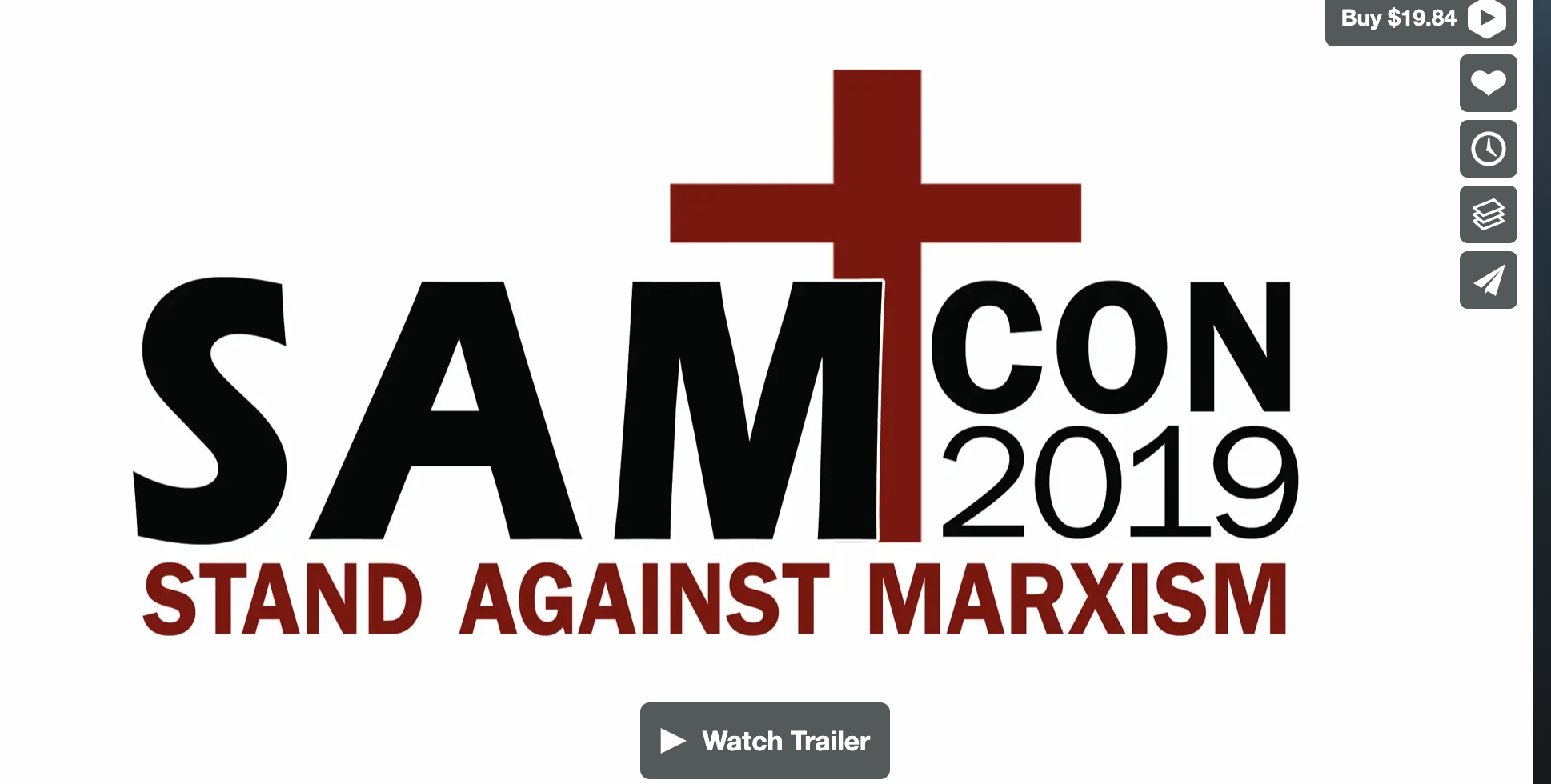 Praying Effectively For the Lost – A Polemical Review Restricted Abortion is Bad for Business, “Time to Stand Up for Reproductive Health” and “Our Values,” Says 180 Top Business Executives