Earlier today, the news broke that the publishing arm of the SBC, LifeWay, and Tyndale House, a major Christian publisher, would stop selling the book “The Boy Who Came Back From Heaven.” In a statement issued by Mark King, Director of Communications at Lifeway, he confirmed that the stores are pulling the book, stating:

LifeWay was informed this week that Alex Malarkey has retracted his testimony about visiting heaven as told in the book The Boy Who Came Back From Heaven. Therefore, we are returning to the publisher the few copies we have in our stores.

“Tyndale has decided to take the book and related ancillary products out of print.”

This will be welcome news to many concerned Christians who have for years lobbied both of these organizations to stop profiting from the sale of “Heavenly Tourism” books, supposed “true stories” of people (often young children) visiting heaven and coming back to tell about it, which inevitably become best sellers.  One of the main criticisms of these books, of which there are many, is the frequency with which they out-rightly contradict each other, regaling the reader with diametrically opposing details on the afterlife, including details of who will be there, what Jesus looks like, and the like. A simple example would be that in Colton Burpos’ book Heaven is for Real, readers are told that everyone in heaven has wings. Don Piper’s book 90 Minutes in Heaven makes no mention of wings on the residents of heaven.  (Note: the Bible indicates that the residents of heaven, before the resurrection of the saints, do not have bodies.  It’s unclear why people with without bodies would need wings.)

While we are glad that at least one of the heavenly tourism books that were gathered by LifeWay and sold to the masses has been removed, it’s simply not fitting to leave the situation where it is.  It’s not as if LifeWay was taken by surprise by the open letter from Alex Malarkey claiming that his trip to heaven did not take place.

LifeWay knowingly sold Alex’s book, and many more like it, for a very long time. LifeWay has ignored and deflected criticism for years, and it was only when the Pulpit and Pen wrote a post that went viral, approaching half a million views, and put it under intense pressure from social media and remarkably bad press, that it pulled the book…with barely a statement and certainly no apology or reason for this.

We’ve seen this game played too many times and it won’t be so easy to just pull out, shut up, and wait for everything to blow over. Not with this story now having been covered by  Christianity Today, The Christian Post, The Washington Post, Jezebel, Huffington Post, NPR, RawStory, and many more.  This is not going to just blow over.

So let’s review some unanswered questions.

1. We are told that “Lifeway was informed this week that Alex Malarkey has retracted his testimony about visiting heaven as told in the book The Boy Who Came Back from Heaven. This is not true. In May of 2014, Justin Peters, a highly respected apologist who has toured the country giving apologetic and discernment presentations to tens of thousands of Christians, reached out to Thom Rainer, President of Lifeway. Also interestingly, Justin Peters is a former trustee of Lifeway, hence his relationship with Rainer.

Justin Peters is known for his meticulous documentation of heresy and error, as well as his excellent and detailed use of audio and video clips of the person he is discussing to let his audience members see and hear for themselves the theological weaknesses and spiritual poison that is invariably being peddled. Justin Peters emailed Thom Rainer and Ed Stetzer to address his concerns about the books that Lifeway was selling and promoting, and provided Tom Rainer with the documentation. In this email exchange from 8 months ago, Justin Peters, Ed Stetzer and Thom Rainer go back and forth about the merits,value, and purpose of Lifeway carrying these books.

The conversation starts off with Justin saying…

And this is where we see it. First notice the humbleness and heart that Justin has as he pleads with him, and secondly notice the words that we’ve highlighted in red: 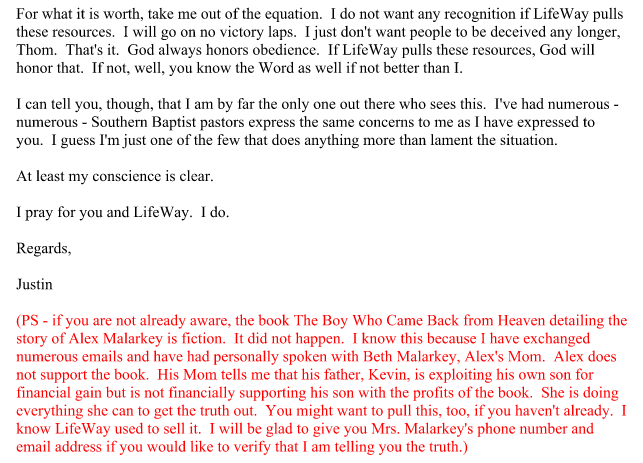 Thom Rainer did not respond to or acknowledge this bombshell. This email was sent in May of 2014. There was no follow up with a “REALLY!!? WE SELL THAT!?” No asking for more details. No thanking him for bringing this to light and to his attention. No curiosity over whether or not it’s currently being sold. No empathy or display of concern for the family. No outrage that this terrible injustice is being committed. No righteous anger and indignation that a completely contrived New-York Times best seller that sold over 112,000 copies in the year 2010 alone was being sold and consumed to unsuspecting and naive Christians. Also equally important was there no engaging in Justin Peters concerns. Also, Thom Rainer passed off dealing with Justin Peters to Ed Stetzer. It would seem at least likely, if not probable, that the conversation and emails up to this point would be shared by Stetzer. Nontheless, he does play a major role in these discussions.

More than likely Lifeway’s Director of Communication did not know when he said they just found it out this week, but it’s difficult to come up with a scenario where their president, Thom Rainer, did not know, particularly where the statement makes up half the email. And so instead of repentance, he and Ed Stetzer have chosen entrenchment, particularly over the last few weeks.

But more back and forth ensued with Justin Peters, looking for direct, substantive responses which actually addressed the concerns that were being raised, and Ed Stetzer – with whom the conversation had been passed off of – contented himself with simply being obstinate and bullish. The conversation ended on a dour, morose note. 2. Why did Tyndale House not pull this book earlier? It’s not like we were the first people to bring it up. We were the first people to publish so direct a statement from Alex Malarkey’s own mouth and help things take off, sure, but as others have pointed out, Beth Malarkey has been trying  on her own blog since April of 2014 to tell anyone and everyone who will listen that this book was not true and that her son completely disavowed it. The more I researched the more mentions I have found that this has been around for at least two years old

To say that Tyndale House was shocked to JUST find out that this whole book was a ruse is disingenuous. No one knew that some of their best-selling authors were blogging and writing and sharing with people that their story wasn’t true? That didn’t cause anyone’s ears to perk up? No one caught wind that their authors were publicly bad-mouthing their own book? That’s difficult to believe. Here is a more plausible scenario: they knew for years and did nothing. The pursued profit over personal integrity. It was only when the pressure and bad press grew so loud that they put on the appearance of doing the right thing. They are guilty and they have done a disservice to their mission and launched an offensive war of lies against the church of Jesus Christ. Updated!!! with article from Phil Johnson showing that Tyndale House knew for years

These questions need to be answered. Why did Rainer not seek to stop the book from being sold once he knew the truth? Do Thom Rainer and Ed Stetzer really believe that the experiences conveyed in heavenly tourism books are real and have enough sound biblical character to be passed on and sold to the masses? Why did Lifeway not listen to the messengers of the Southern Baptist Convention in 2014, who repudiated these books and passed a resolution accordingly? Do Thom Rainer and Ed Stetzer believe these accounts to be true? Could not a lot of shame and embarrassment been spared Lifeway if its executives would have only listened to SBC messengers and honored their wishes? Will Southern Baptists hold Lifeway’s executives to account? Will Christian consumers from across the evangelical spectrum hold book publishers to a higher standard?

Brothers, please. We can do better. We must do better. The love of Christ And the faithfulness to the truth and sufficiency of his word compels us to do better.

Jim Bakker Sells ‘Trump Coins’ as a Conduit to God

I’m writing a book about my recent trip to Heaven