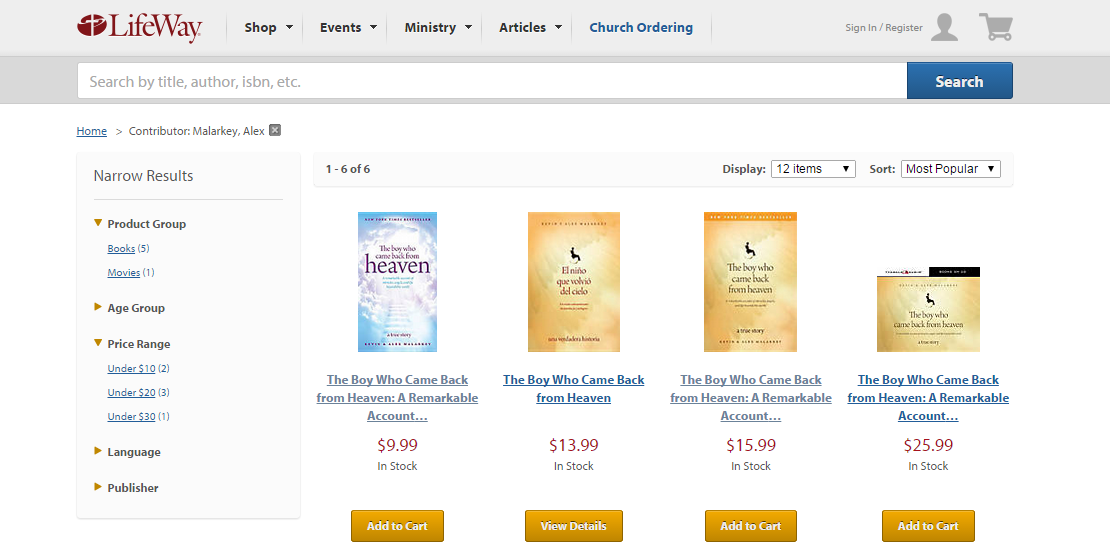 UPDATE 1 ! According to sources, Lifeway intends to pull this book from it’s bookstore! Warren Throckmorton has the story, but the gist is that in response to  Throckmorton’s questions, “Martin King, Director of Communications at Lifeway issued a statement saying the stores are pulling the book:

“LifeWay was informed this week that Alex Malarkey has retracted his testimony about visiting heaven as told in the book “The Boy Who Came Back from Heaven.” Therefore, we are returning to the publisher the few copies we have in our Stores.”

We have commentary on this and will be posting a fuller update tomorrow morning.

“In 2004, Kevin Malarkey and his six-year-old son, Alex, suffered an horrific car accident. The impact from the crash paralyzed Alex–and medically speaking, it was unlikely that he could survive. ‘I think Alex has gone to be with Jesus,’ a friend told the stricken dad. But two months later, Alex awoke from a coma with an incredible story to share. Of events at the accident scene and in the hospital while he was unconscious. Of the angels that took him through the gates of heaven itself. Of the unearthly music that sounded just ‘terrible’ to a six-year-old. And, most amazing of all . . . Of meeting and talking to Jesus. ‘The Boy Who Came Back from Heaven’ is the true story of an ordinary boy’s most extraordinary journey. As you see heaven and earth through Alex’s eyes, you’ll come away with new insights on miracles, life beyond this world, and the power of a father’s love.”

It’s in this context- the context of Lifeway selling this book and making money off of it for years- that Alex Malarkey, the co-author of the book, has reached out to us.  [Update: Many people have asked if this is the first time Alex has spoken out directly. Although Alex’s mother has tried to speak out and contacted book-sellers and has been flatly ignored, going back to at least December 2012, on her blog and in other places, I believe this is the first time Alex has himself spoken out in such a direct way in his own…except for posting a comment relaying this information on the Alex Malarkey fan page on Facebook, after which the comment was deleted by moderators and he was blocked from the group. It doesn’t matter that we are or are not the first. That point is utterly irrelevant. What is relevant is that God willing we will be the last, and that we’re able to provide Alex with a wider audience that he had received the first few go-arounds to get people’s attention.

Alex and his mother are well aware of the #the15 and supports the mission of those who are tired of being marginalized and written-off by those considered to be Christian leaders for bringing up legitimate concerns. We saw an example of Beth reaching out to Christian leaders over a month ago when Thom Rainer, president of Lifeway Christian Resources and one who has become the object of much exhorting and beseeching about these issues, was contacted by Alex Malarkey’s mother, Beth.  Alex’s mother communicated to Rainer that her son Alex was against the book that purported to be his story.

Unfortunately, Thom Rainer has taken no apparent action as result of Beth’s comments. Perhaps he plans to, I don’t know. I do know that, so far, due to the pressure and pleas from the Pulpit and Pen and others, that three of the books that we have taken aim at and labelled “the worst books Lifeway sells” have been pulled from their online store.  We’re going for a fourth…not because we’re upset and just want to cause a scene, but out of love and care for our neighbors who might read this. Sadly, messengers to the SBC in 2014 passed a resolution against such books, but Rainer continues to proudly display heavenly tourism on the shelves at the SBC-owned Lifeway bookstores.

Also, we are publishing this story because Christian publishers and retailers should have known better. They should have had the spiritual discernment, wisdom, compassion, and intestinal fortitude to not sell a book which contains, along with all books like it, deep theological problems. It also doesn’t help that in what is purported to be a “TRUE STORY”  that there are vivid descriptions like which test the limits of how far we are willing to go outside the realm of scripture and accept as having been from God.“The devil’s mouth is funny looking, with only a few moldy teeth. And I’ve never noticed any ears. His body has a human form, with two bony arms and two bony legs. He has no flesh on his body, only some moldy stuff. His robes are torn and dirty. I don’t know about the color of the skin or robes—it’s all just too scary to concentrate on these things!”

With that said, we offer up Alex’s letter.  It is directed to the Christian bookstores that sell his book for profit. While I’ve no doubt that Lifeway will see this and will more than likely pull it off their shelves and online store, [UPDATE II. As of 7:30am EST on January 15, the book has not been pulled] I would ask and pray that anyone reading this would contact other major Christian bookstores and organizations and send them this link, so that they too would pull it down. We thank Alex for trusting Pulpit & Pen to release his letter. 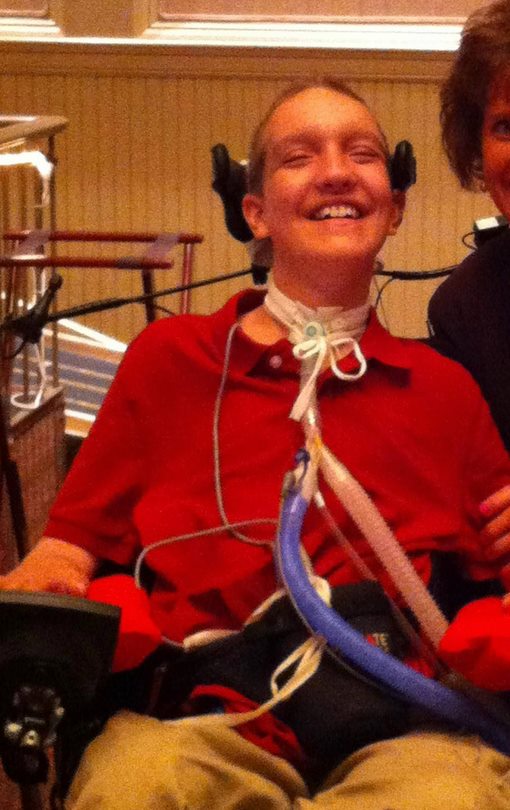 “An Open Letter to Lifeway and Other Sellers, Buyers, and Marketers of Heaven Tourism, by the Boy Who Did Not Come Back From Heaven.”

Please forgive the brevity, but because of my limitations I have to keep this short.

I did not die. I did not go to Heaven.

I said I went to heaven because I thought it would get me attention. When I made the claims that I did, I had never read the Bible. People have profited from lies, and continue to. They should read the Bible, which is enough. The Bible is the only source of truth. Anything written by man cannot be infallible.

It is only through repentance of your sins and a belief in Jesus as the Son of God, who died for your sins (even though he committed none of his own) so that you can be forgiven may you learn of Heaven outside of what is written in the Bible…not by reading a work of man. I want the whole world to know that the Bible is sufficient. Those who market these materials must be called to repent and hold the Bible as enough.

The Bible is enough.

The Bible is sufficient.

We don’t need Christian bookstores to sell us books and resources  that tell us otherwise. We pray that Thom Rainer, Ed Stetzer, other Lifeway executives and all Christian book retailers will take notice of this courageous and Gospel-centered 16 year-old young man, and that everyone reading this will lift him up to the Lord.

Douglas Wilson on the Danger of Russell Moore

My Visit to Steven Anderson's Faithful Word Baptist Church, and the Surprises I Found There