A man referred to as a “blogger” by Christianity Today (who has a pretty respectable job in the real world) named Cameron Dobbins released a list of books sent to (at least, certain) Lifeway Stores that would not be sold.

We, too, were skeptical at first. We were skeptical because of the title of the pdf file (linked above) that read “list of authors removed from Lifeway” because we knew, in fact, that many of these authors were not carried on the shelves in Lifeway stores. However, we thought it highly possible that given the circumstance of how Dobbins received the email or memo, perhaps this was his conjecture or – more likely – it was the list of books not necessarily taken from stores, but removed from the special order list.

Dobbins reached out to Pulpit & Pen, and I reached back and spoke to him personally. According to Dobbins, this indeed came from an employee at Lifeway. For fear of repercussions, the list was collated from an email. I wanted further verification, and so I called a number of Lifeway store employees who have reached out to us as supporters of #the15. Each and every employee I spoke to (3 in total, in 2 states) acknowledged the existence of such a list of authors currently circulating and employees in the stores have been told to check against this list in the case a special order is placed. It appears to us, that two of the three store employees who’ve reported to us have seen slighlty different lists, with many cross-overs from what Dobbins provided. We  can independently confirm Dobbin’s account that such lists are being sent to Lifeway employees.

In the mean time, please keep several things in mind. First of all, Christianity Today discounts this blacklist because they received the word of Marty King. King, the Lifeway spokesperson, has been caught in untruths before. King reported to the Baptist Press, Janet Mefferd and others that Lifeway executives only found out about Malarkey’s recantation of his Heaven Tourism account when the story broke on Pulpit & Pen. Pulpit & Pen then released emails between Justin Peters and Thom Rainer and Ed Stetzer, in which Rainer and Stetzer discovered Malarkey’s recant back in May of 2014 – and yet chose to sell the book anyway. Pulpit & Pen spoke with Marty King, who refused to correct his false statement. Even after much public outrage concerning that lie, King chose to dig in on that patently untrue statement.

“Although LifeWay Christian Resources does not carry titles by most of the authors included on a list recently posted on the Internet—and has never carried most of them—the list was not released by LifeWay,” he said. “Similar to most retailers, LifeWay decides—based on a variety of factors—which resources to carry from the tens of thousands available to us. Therefore, we do not comment on individual resource selections.”

This mimics the language used by Ed Stetzer as he called friends of the Pulpit & Pen on Christmas Eve of 2014 as #the15 movement grew. His apologetic was, “at least we don’t carry Joel Osteen or Joyce Meyer.”

And so, we researched that. Do you know what we discovered? We discovered that although these more nefarious books are not technically “carried,” they are available for purchase via special order. In our post, we released audio of Lifeway employees ordering for us Osteen, Meyer, and even gay-Christian propaganda…the very worst of the worst.

The blacklists sent to Lifeway employees weren’t in regard to what would be “carried” (to use King’s careful language) but was to be cross-referenced for special orders, where the worst and most unbiblical books can be ordered.

So why would the Christianity Today do such terrible, terrible research (or utter lack thereof) in “reporting” this story, a quick and reactionary damage-control piece in response to a relatively unknown “blogger”? Could it be that Ed Stetzer – who began the entire #the15 movement by his disregard for public concern about Lifeway’s peddling of heresy – is a contributing editor to Christianity Today?

At least when the secular news media has a conflict of interest they report it in the body of the article for full disclosure.

Ed, brother, we see what’s happening here. Christianity Today, the evangelical masses really aren’t as dumb as you think. And frankly, you’ve got to stop letting these mere “bloggers” hands-down beat you when it comes to real journalism and reporting.

The article at Christianity Today that we said above served as some pretty shameless “cover-fire” for Lifeway, we discovered (thanks to a friendly news reporter who sent us an email to point it out), was co-written by Bob Smietana. Bob Smietana is an employee of…you guessed it – Lifeway. Smietana writes for Facts & Trends Magazine, owned, published and circulated by Lifeway.

We repeat…according to Facts & Trends website, Smietana is still an employee of Lifeway. Christianity Today, this type of “reporting” is deceitful, wrong, and sinful. We are calling on you to issue a public retraction of this story, along with an apology that Smietana’s employ at Lifeway should have been disclosed. This was not an independent story of journalism on the part of Christianity Today, but a PR piece for Lifeway. Please amend the situation immediately.

Bob Smietana, the co-author of the above Christianity Today post, has stated on Twitter he is a “former” employee of Lifeway. We would like to provide this screenshot of Lifeway’s Facts and Trends Magazine, taken this morning… 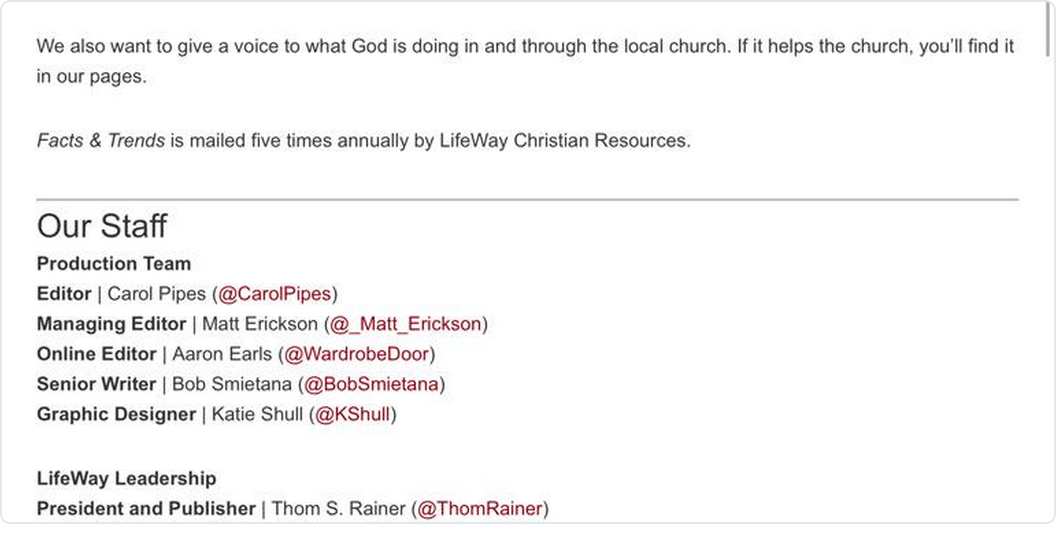 Perhaps the Lifeway magazine has yet to update their website. So when did Bob resign Lifeway? Well, here’s a screenshot from an article from March 11 2015 (just last month) in Christianity Today, in which Bob calls himself a “senior writer for Facts & Trends magazine.”

If Bob is no longer employed by Lifeway’s magazine, and Facts & Trends has still not updated their website, and just last month he was working for Lifeway, we still would like to remind Christianity Today and Bob Smietana of the Code of Ethics for the Society of Professional Journalists.

This code specifies, but it is not limited to:

– Identify content provided by outside sources, whether paid or not.

– Deny favored treatment to advertisers, donors or any other special interests, and resist internal and external pressure to influence coverage.

– Distinguish news from advertising and shun hybrids that blur the lines between the two. Prominently label sponsored content.

We feel that all of the above have been violated by Christianity Today and Bob Smietana, and obviously so.

The Cessation of Tongues and Prophecy in the Reformed Tradition