Several days ago, at the beginning of #the15 movement, we posted this article which we asked “Is this the WORST book Lifeway sells?” We were of course referring to  The Mystic Way of Evangelism: A Contemplative Vision for Christian Outreach, by Elaine A. Heath. This book, among other things, told us how we ought to learn evangelism practices from the great Roman Catholic mystics, including Ignatius of Loyola, who was known for starting the Jesuits and battling the Protestants during the counter-reformation.

In a thankful turn of events, and as a direct response from the pressure and bad publicity that Lifeway has received from #the15, they have pulled this book from their online store. That’s not to say of course that it still won’t be sold. As we have uncovered and written about just recently, even though Lifeway doesn’t sell in store or online books by Joel Osteen or Joyce Meyer or other “banned authors”,  due to deep theological disagreements with them, if you call Lifeway and request them they will order them for you, by the hundreds if required.

But it’s still a small victory and we’re thankful for it. Whoever pulled it did the right thing, and regardless of the motivations, the decision to have it removed from the store was the only Christ-glorifying one and ought to be encouraged.

Here’s the thing though- this whole brouhaha isn’t about that one specific book. That book was awful, sure, and we’re about to tee up another truly horrendous, horrific one that will blow your mind in a minute or so, but rather’s it’s the sheer quantity of theologically poisonous books being sold by an institution which is supposed to be the publishing arm of the SBC. It’s the fact that them pulling this book is a damning indictment against the other 100 they still refuse to take down- the ones that make the big bucks, and the ones which only get whisked away when the threshold of people making waves rises high enough to crash over the bad-publicity barriers. And we’re not talking about these little obscure books that probably [hopefully] might sell a handful a year. We’re talking about the ones that have historically been promoted by Lifeway.

Why is Lifeway still selling books in store and online from modalist TD Jakes? Why are they still selling “Jesus Calling” By Sarah Young, where the author claims she was receiving and writing down direct messages from Jesus himself?

Why are they still selling books on “Heavenly Tourism” by men such as Don Piper?  The Baltimore SBC convention put forth a resolution against books like these, and in fact the present SBC International Mission Board president David Platt condemned such books. After he raked over the coals the institutions which sold them and the publishers who published them, recognizing them as nothing more than a money-grab which sells, in a scathing indictment he said of them, quoting John MacArthur:

“Anyone who truly believes the biblical record, it is impossible to resist the conclusion that these modern testimonies with their relentless self-focus, and the relatively scant attention they pay to the glory of God are simply untrue. They are either figments of the human imagination, dreams, hallucinations, false memories, fantasies, and in the worst cases, deliberate lies–or else they are products of demonic deception. We know this with absolute certainty because Scripture definitively says that people do not go to heaven and come back”

Why are they still selling and promoting “The Circle Maker” By Mark Batterson, which famous Christian book reviewer and Pastor Tim Challie surmises

” The Circle Maker is a mess. I admire Batterson’s desire to pray boldly and love his call to more prayer, better prayer, more audacious prayer. Yet so much of what he teaches is sub-biblical, extra-biblical or just plain unbiblical. With hundreds of good books on prayer available to us there is absolutely no reason to spend as much as one minute or one dime on this one.”

What is Tim Challies talking about? Probably quotes like this from the book : “Bold prayers honor God, and God honors bold prayers. God isn’t offended by your biggest dreams or boldest prayers. He is offended by anything less. If your prayers aren’t impossible to you, they are insulting to God.” or “God does not answer vague prayers. The more specific your prayers are, the more glory God receives.

And while we’re talking of Mark Batterson, let me throw up a pictures for free. Just because we can: 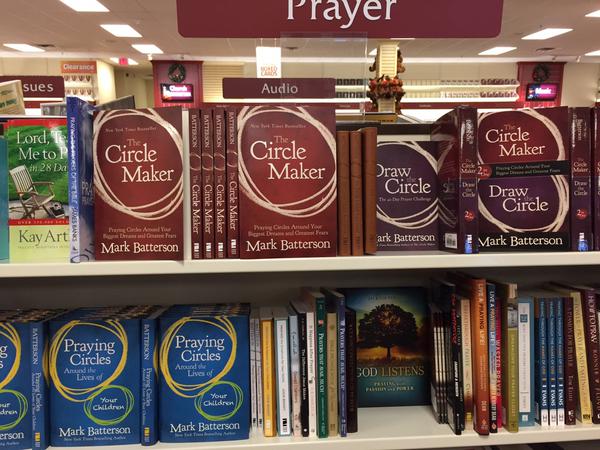 Unfortunately these are Lifeway’s bread and butter. These are what go on endcaps with their own displays front and center. These are the best sellers. And if we don’t continue to call Thom Rainer, Ed Stetzer and the Lifeway Trustees,  and beg them, plead with them, write them, post to them, and tag them, asking them to act righteously in this manner, then they will continue to keep on selling these books, falsely purporting to contain sound, orthodox Christian doctrine, and many souls will be harmed in the process, and not the least is that God’s name will be blasphemed and his character will be impugned.

Which leads us to a new book that we found just a few hours ago. It goes without saying that it dethrones the previous one to claim the title as “The Worst Book Lifeway Sells”

The book is called Christian Mystics: 365 Readings and Meditations, by Matthew Fox. Instead of regaling you with thoughts on why this book is so bad, I’m merely going to leave you with the list of other books written by this author, and one page from the book itself, and present the whole thing without further commentary. 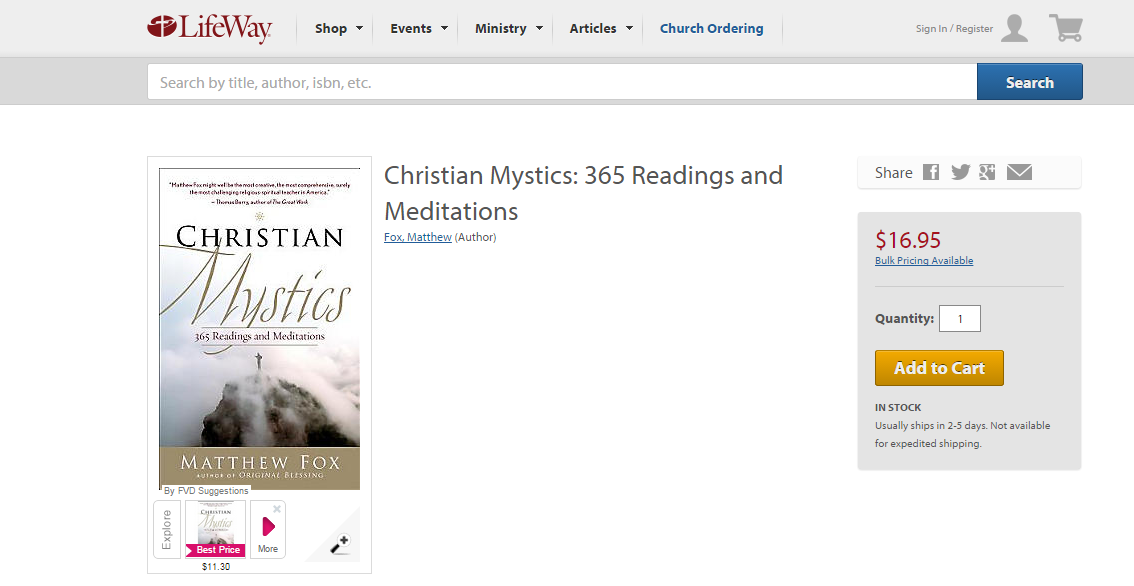 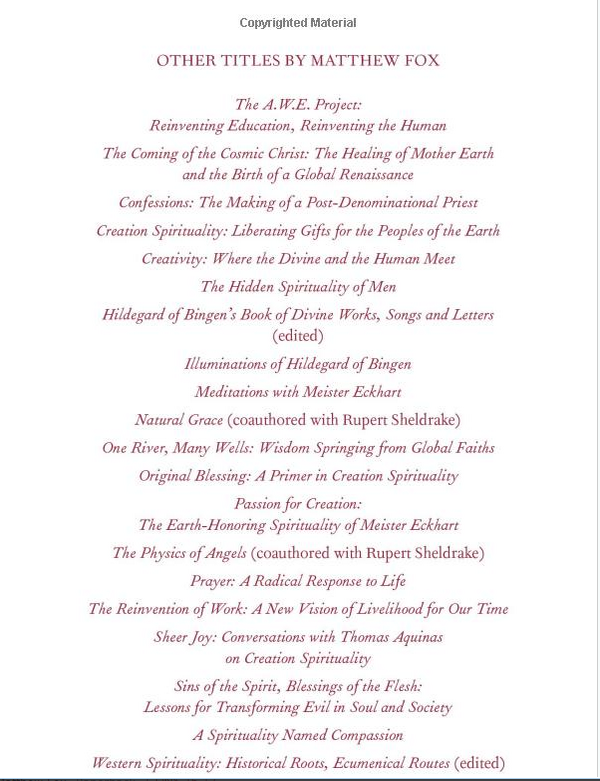 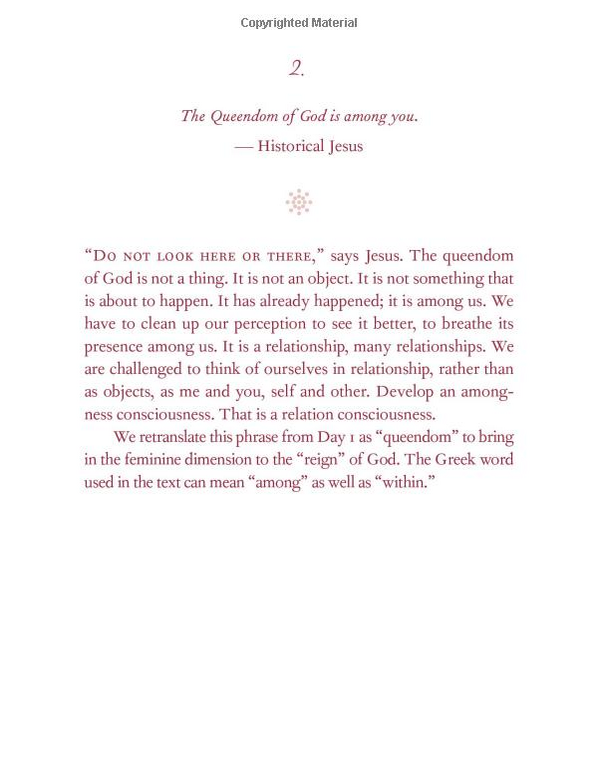 I don’t know if it slipped through the cracks. I don’t desire to assume evil and that someone out there purposefully allowed this in, but it’s difficult to continue to assign pure motives when they have eaten up all their goodwill, and when they continue to indulge in openly, gross, mammon-driven marketing campaigns to sell heretical and unbiblical books to their undiscerning and weak brothers and sisters.

Being Gay is Not a “Cross to Carry”

College Offering Course on How to “Queer God”

Finding a “Sacred Meaning” in Anything Pagan