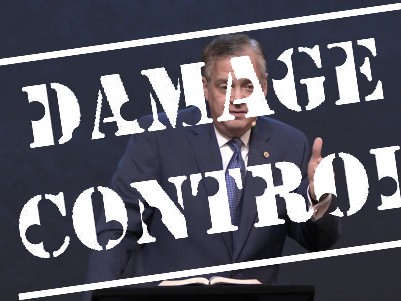 Mohler promised us in The Federalist that he wouldn’t allow Critical Race Theory to be taught at Southern Seminary. Mohler raged, incensed and angry, that anyone would question where he stands on the subject. He promised leaders privately he was trying to stop CRT at his institution, but privately, he was at the epicenter of the movement’s growth. All the while, three professors vigorously taught CRT both under his nose and with his blessing, including Matthew Hall, Curtis Woods, and Jarvis Williams.

Videos have repeatedly been released of Hall espousing textbook Critical Race Theory, White Guilt, White Privilege, and the basic tenets of Cultural Marxism. The last time this happened, Mohler just deleted the videos and claimed that they were just “unhelpful,” while vouching for Hall’s theological soundness.

But this week, Pulpit & Pen released more video of Matthew Hall claiming himself to be a racist, claiming that all people are racists, and teaching more textbook Critical Race Theory.

So how does Mohler, the consummate politician, wiggle out of this one?

Under mounting pressure, Mohler has Matthew Hall denounce his own teaching.

In recent months, the topics of critical race theory (CRT) and intersectionality have prompted no small measure of discussion in Baptist life. It would be virtually impossible to get into a complete review of CRT here. But let’s be very clear: Christian witness must reject CRT and the ideological foundations that shape it, along with the proposals it offers for change. In the big picture, it seems to me that CRT assumes a basic materialism, ignoring spiritual realities and, in particular, the truth that human beings are made in the image of God. It also seems to me to have a deficient teleology, one that sees history most basically as a contest between oppressors and the oppressed. Because of its deficiencies, CRT can never adequately diagnose the fundamental problems inherent in racism, nor can it adequately prescribe a true solution. Only the gospel of Christ can do that. Similarly, this is why liberation theologies are irreconcilable with the biblical gospel. While the biblical worldview certainly acknowledges injustice in a fallen world, the defining story of Scripture is redemptive, centered on the person and work of Christ, propelling history forward to the glory of God.

Well, there you have it. There’s nothing to see, Citizen, move along…

Hall called himself a racist and white supremacist…twice…on video. The only way that can be taken – other than through the lens of Critical Race Theory in which every white person is a racist, is that Hall is an actual racist. If so, why is Albert Mohler employing a racist?

If all we had from Southern Baptist Theological Seminary was a straightforward rejection of Critical Race Theory (like this provided by Hall), we would be in great shape. Unfortunately, as ES Williams demonstrated in his damning video about Albert Mohler’s role in propagating Critical Race Theory at SBTS, Mohler helped promote CRT in his institution and has been vigorously platforming those who promote it.

THE POINT OF THIS ARTICLE FROM HALL

The point of this video from Hall, which plainly and demonstrably contradicts his own words, is to pacify Albert Mohler’s critics. There is no other reason.

Mohler is caught in outright lies about where he stands on CRT. He is, as ES Williams demonstrates, a liberal plant inside the SBC and has been driving the denomination to the hard-left for over a decade while saying very conservative things.

At the Stand Against Marxism Conference, I predicted that Mohler and company would simply rename their beliefs and reject the labels previously ascribed to them. These subversive teachers just juke and jive with labels and terminology, even though they are sold-out to the ideas.

“They will only rename their beliefs,” I said, “and start calling it something else. This is why we are not to mark the false teaching, but also the false teachers.”

Now I beseech you, brethren, mark them which cause divisions and offences contrary to the doctrine which ye have learned; and avoid them. Romans 16:17

From now on, when people question why Albert Mohler is allowing CRT to be taught in his seminary, he will point people to this day-late and dollar-short repudiation of the CRT label by Matthew Hall (and probably accuse his accusers of slander).

In reality, this post repudiating CRT by Hall does not speak for itself. It must be heard in tandem with the sounds coming out the other side of his mouth, espousing the very philosophies he supposedly rejects.

A Gallery Of The Faithful Gathering For Church Amid Pandemic. Album Six