Rallying for the defunding of Planned Parenthood isn’t inflammatory rhetoric; it’s political engagement. Videos depicting the self-damning words and actions of Planned Parenthood officials isn’t yellow journalism; it’s investigative reporting. On the other hand, referring to abortion providers as “abortion ghouls,” clinic volunteers and workers as “deathscorts” or “bloodworkers,” and women who obtain abortions as “murderers” is worse than inflammatory: it is unchristlike. Calling legal abortion “murder” when it isn’t (it is, to our shame, lawful) is to say what isn’t true, at least in a civil (not church) context. [Emphasis ours]

You probably recognize this quotation by now. It’s by self-described feminist and research fellow for the ERLC, Karen Swallow Prior (click this link for a list of most of our posts we’ve written regarding her since mid-summer). Chiefly, we’ve argued that Prior is a radical animal rights activist, affirms homosexuals in their sin by her behavior and affiliations, and is in no uncertain terms a social progressive that has no business helping to guide the policy positions of the Southern Baptist Convention’s ERLC.

At each and every juncture, Pulpit & Pen has been buffeted in this warning by detractors who insist on claiming Karen Swallow Prior is merely misunderstood, or perhaps she’s so smart we don’t understand her, or she is perhaps just misrepresented (‘Turretin Fan,’ Chris Bolt, Frank Turk, Dustin Germain and others). Prior – a literature professor at Liberty University and sometimes-writer for Christianity Today, Sojourner Magazine, the ERLC blog and other publications – is lauded as particularly intelligent, articulate and well-worded. Of course, that’s the Evangelical Intelligentsia schtick…they layer everything in nuance and whimsy, unlike the rest of us low-church cavemen who are always putting our foot in our mouths. The smart people will tell us how to put things. In fact, they’ll just do the talking. Adding nuance to everything is their strategy. That’s their game plan. And so, Karen Swallow Prior wrote that atrocious piece for Christianity Today telling pro-life Christians to tone down our rhetoric and choose words carefully and definitely don’t call abortion murder or ghoulish or anything. She was then praised in Evangelical Intelligentsia circles for her nuance.

Now, the ironic thing about this fellow’s tweet – which KSP was more than happy to retweet – is the unbelievably obvious reality that her nuance led to the very revision and clarification he tweeted. Like, I mean, does he not get that? When KSP said #damntheeconomy she had to make clarifications. Virtually everything she writes requires further clarification. With this article in particular, she has now edited her post in perhaps the world’s most prominent “Christian” publication three times. Who does that? And her thing is communication? For a communications guru who lectures pro-lifers on our need to correctly choose our words, she’s edited this post now three times to change her words? Behold! The power of nuance!

Of course, Pulpit & Pen has been demonstrating in continual, slow, agonizing detail why these aren’t “misstatements” with KSP. This is from her lack of convictions (except on animal rights, in which she has lots of convictions) on topics pertaining to authentic social conservatism. She is not a person who says what she means and means what she says, and she is not a person whose private conversations match her public discourse. In short, we’ve told you so. Some have noticed.

Well…right. We’re not expecting an apology. But, still.

First, we’ve been warning you in continual, slow, agonizing detail why this woman is a closet liberal and social progressive who you do not want shaping social policy for the SBC’s ERLC. Every post has relayed that fact. Anyone who was surprised that Prior wrote those now-infamous words was simply not believing or listening to Pulpit & Pen. But that fact is, Dustin Germain was flatly wrong in that assertion. You see, we addressed Prior’s wishy-washiness on abortion in our very first post on her. We wrote then…

In a guest post entitled “Finding Common Ground on Abortion” at Patheos (if the title doesn’t turn your stomach, just read its content) in March of 2015, Swallow Prior desires to drop labels like “pro-choice” and “pro-life”  (in the context, this is an interview with Charles Camosy) and seeks to cooperate with  Camosy to get a “fresh perspective on the abortion debate [to] help reframe the conversation around reproductive technology, and inspire more helpful responses that address concerns with prenatal life while also addressing the great pain that such technologies aim to alleviate…”  Swallow Prior calls Camosy’s book, “refreshing and hopeful ” – and the book argues that “abortion is radically complex” and there is no “conservative position and liberal position.” Swallow Prior gives glowing accolades to the book whose author says that using the term “anti-life” to refer to abortion is a “rhetorical hatchet job.”

How many Southern Baptists would agree with those positions?

Thankfully, most were able to see Prior’s now-infamous words for exactly what they were.

Again, Karen Swallow Prior said – in no uncertain terms – that abortion is not murder “at least in a civil context,” as though it is the civil magistrate that can determine what is and what is not murder. Perhaps this is why Prior has spoken only sympathetically of legalized marriage because it’s a “civil matter.” But just as concerning, Prior said that calling abortion murder (or abortion workers “deathcsourts” or “ghoulish”) is unchristlike.

The article has been revised several times. Currently, after the now-infamous statement, a parenthetical clarification has been added.

Ironically, this clarification was added right above a paragraph lecturing eloquently on the importance of word choice, discussing the “raison-d’être” (doesn’t that sound smart?) of language. Hmmm. I guess the teacher would have to give herself an F because she really, really failed at communication there.

Frank Turk thought this was a great improvement, however.

But again, the irony…didn’t acknowledging – begrudgingly, after first denying it – that abortion is murder make Karen Swallow Prior “unchristlike”?

Karen Swallow Prior has continually argued that using the term (which she now says is accurate) is still unchristlike. On an inexplicably anonymous person’s Facebook page… 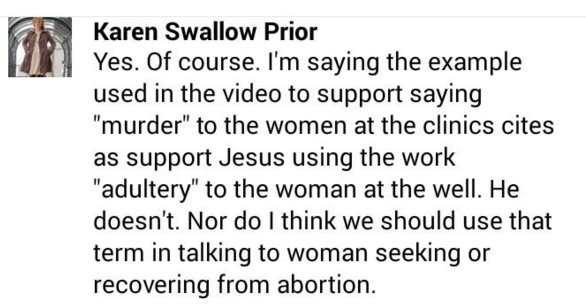 So, Jesus wouldn’t call an adulterer an adulterer because he didn’t call [the samaritan woman caught in adultery] an adulterer. And so we shouldn’t call women who kill their kids murderers, according to Prior’s argument. As a pastor who has on more than one occasion had a crying mother in my office who has killed her baby years before, sitting there convicted over her sins under the power of the Holy Spirit, who I have granted absolution (as best a Baptist can) for the sin of murder, upon which they’ve been victoriously freed by the blood of Jesus, I have to forcefully reject Ms. Prior’s assertion that “murderer” is not something a murderer should be called. They should be called a murderer, the blood of Jesus should be plead, and they should be forgiven for that. There’s no forgiveness of sins that can’t be acknowledged. Have you murdered? Acknowledge yourself a murderer and be forgiven.

With pro-life activism like this, who needs Planned Parenthood? – Joel McDurmon

But, Karen Swallow Prior has a long history of pro-life “activism,” right? I mean…that’s her thing. Activism. She started a “Feminists for Life” group. She’s called herself a sidewalk counselor (apparently never pointing out to potentially homicidal mothers that they were about to murder their baby). Like every feminist, Prior needs “street cred.” She’s been billed as an “in your face” activist with a long arrest record and even an FBI file.

A formerly freckle-faced pothead with a penchant for getting arrested…with an FBI file? Really? Yesterday, KSP claims arrest five times.

Well…here’s the thing. Pulpit & Pen did a criminal background check on Prior and it turned up empty except for a few misdemeanor traffic violations. That’s interesting.

So Prior has been arrested at least five times, but it’s never led to conviction? That’s some good lawyering, for sure. I’m thinking of all the crazy AHA folks I know and even the craziest of them was only momentarily detained once (and that was at a Southern Baptist Church). What on earth was KSP doing to give her an FBI file and how did a “penchant for getting arrested” not lead to any convictions?

Well, if her story is true…good for her. Really. Whatever it was that got her thrown into a jail cell – standing too close to the doors at Planned Parenthood, maybe stepping off the public property sidewalk – then seriously…good for her. But man, I sure hope there’s some corroborating evidence out there. And I’m not being sarcastic. I seriously hope so. If not, this is going to unravel faster than another Liberty University employee’s stories a few years ago.

But I will say this. Regardless of whether her supposed penchant for arrest was a real thing, it doesn’t seem to have lead to any convictions. And by that, I don’t mean convictions in the legal system. Arrest doesn’t have to lead to convictions, after all. No, I mean convictions of the soul. Take for example what Prior said about those who abuse animals…

While abortion is an issue I can approach from a detached, intellectual and biblical perspective, I respond to cruelty to animals on a much more visceral, emotional level. I can imagine but not fully face what they experience at the hands of an impatient electrocuter or a soulless Michael Vick. Yet, still I find myself buying and eating that meat sacrificed to the modern day idols of convenience, efficiency, and greed.

Do you think, from what you’ve seen Prior write, that she would in a million years refer to abortive mothers or abortion providers as “soulless” or refer to aborted babies as being “sacrified to modern day idols of convenience, efficiency and greed”? Russell Moore just lectured us over at the ERLC blog and told us not to “demonize” those sacrificing babies. What’s more demonizing than to call someone soulless?

Where exactly are Prior’s convictions? Her love for the animal kingdom, if judged by the language she’s  used to describe their mistreatment, seems to far exceed her love for the unborn. Where are all of these “convictions” we keep hearing about? Does Prior seem to have a #DamntheEconomy mentality when it comes to shutting down the abortion industry?

McDurmon is right. With pro-life activism like this, who needs Planned Parenthood?

To a Christian Coach: An Open Letter to Dabo Swinney