Doritos is now partnering with the LGBT campaign, It Gets Better, to produce rainbow-colored Doritos in support of the gay agenda. The gay pride chips are not available in stores, but can be purchased for ten dollar donations or more to It Gets Better. Of the “Pride Flag” inspired chips, Doritos says, “There’s nothing bolder than being yourself” – artificial coloring and preservatives aside, presumedly.

Bursting forth in social media, Doritos says, “With Doritos rainbow chips, we’re bringing an entirely new product experience to our consumers to show our commitment toward equal rights for the LGBT community and celebrate humanity without exception.” Doritos stops identifying with the LGBT community with the color, however, as the chips are flavored “Cool Ranch” and not a proprietary flavored blend of AIDS, efavirenz and emtricitabine. 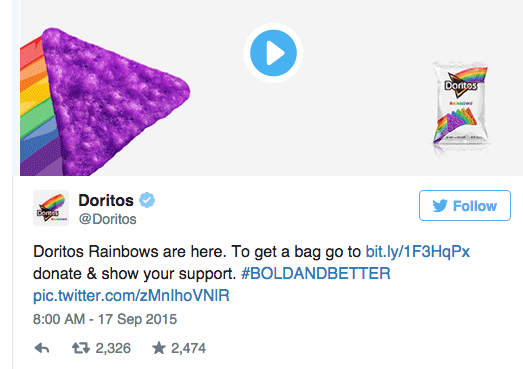 You might remember the It Gets Better campaign from glowing commendation it received from Evangelical Intelligentsia gal and ERLC research fellow, Karen Swallow Prior, in Relevant Magazine. Speaking of the LGBT campaign and its PSAs featuring the likes of President Obama, Hillary Clinton, and certain other Hollywood celebrities, Prior says “The church should be thrilled – but isn’t.” Prior’s support for the LGBT organization is due, she says, to her position of being “pro-life,” as the organization is designed to encourage sodomy-tempted teens to not commit suicide (while, of course, celebrating and supporting their sin).

Well, I don’t know how Karen Swallow Prior feels about the gay chips (I have a feeling her answer would be nuanced), but I’m not “thrilled.” I think I speak for plump, straight Americans everywhere when I say, “hands off my junk food, homosexuals.” Listen, you’ve taken the entertainment world. You’ve taken musicals. You’ve taken figure skating. You’ve taken Madonna’s entire music career (thank you). Do you really have to take junk food?

Doritos is not alone. Oreo created a rainbow-swirled cookie to support the cause. Chipotle began a pro-gay ad campaign. Chobani Yogurt put a few lesbians in their commercials. Unambiguously gay duo, Ben and Jerry, created a sodomy-inspired ice cream flavor.

But what’s the point? Who cares? Are these things just small coincidences in a larger grand scheme of social change and social engineering? Well, maybe. But these things are also telling about the depth of the LGBT agenda and battle for control of our minds in this culture.

Daily Kos posted an article in 2011 making light of the idea that the gay agenda was being shoved down anyone’s throat, entitled “Gays are Shoving What, Where?”  People have laughed at the notion. Liberal America ran a similar article in February of this year, “11 Questions to Ask Conservatives Who Scream the Gay Agenda is Being Shoved Down My Throat.”

Kinda seems to me that putting the gay agenda down our throat is exactly what they’re doing.

A Communist, A Socialist, and A Democrat Walk Into a Bar. The Lesser of Two Evils or A Wasted Vote?