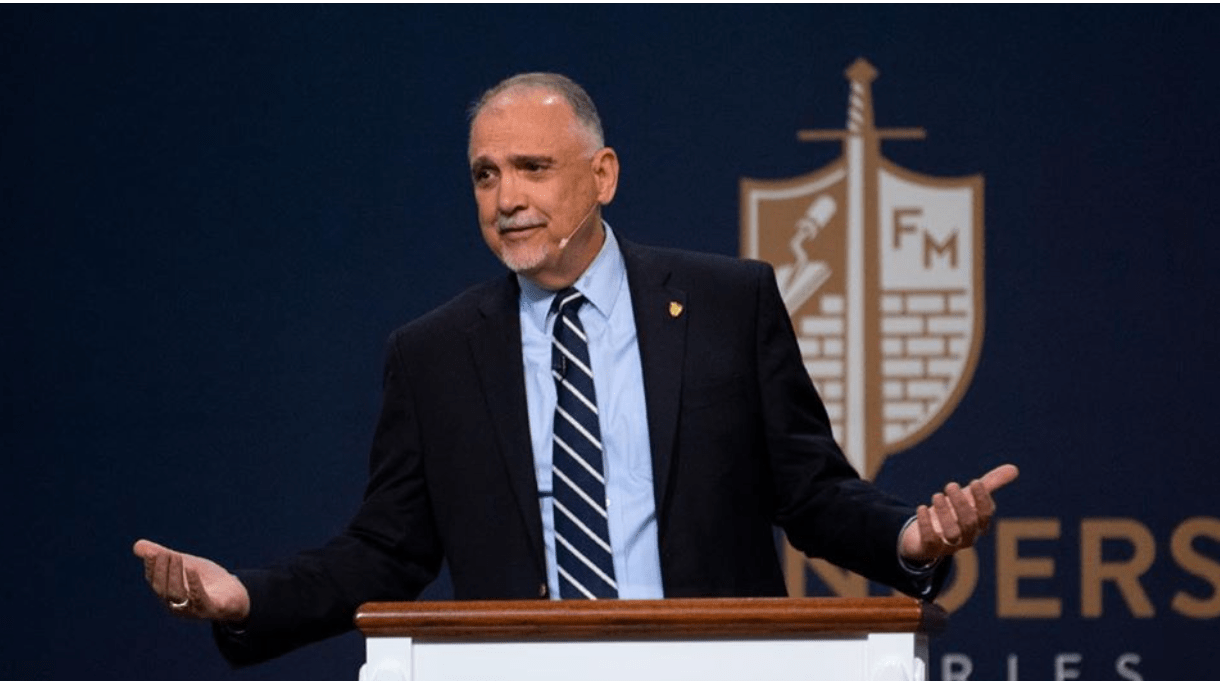 Apparently, when Founders Ministries was beaten like a red-headed stepchild over the inclusion of Rachael Denhollander in their documentary trailer last year, the sense was knocked completely out of them. Taken to the woodshed by the SBC’s most compromised, soulless leaders, many hoped that Ascol’s Founders Ministries would stand firm. In the wake of half the Founders board resigning over the incident, Ascol folded like a cheap suit and before we knew it was cracking jokes with Beth Moore in the midst of her gender-bending rebellion.

One of the many latte-sipping, soy-mustached figures gang-jumping Ascol with crotch-punches during the infamous trailer debacle of 2018 was Chris Bolt, a Twitter personality who seems to spend the majority of his time getting into the thick of it on the social media platform. Supposedly his day job is being the pastor of Elkton Baptist Church (God help them).

Bolt used his position as a Twitter pundit to land low-blows on Founders for daring to flash an image onscreen of professional victim debutante, Rachael Denhollander, who now mostly goes around the country accepting awards for being victimized. In the Political Correctness Wars of the 21st Century, abuse victims have their own protected status and get high Intersectionality points for it, which is the only way that privileged white people can land points on the scale at all. Denhollander and her husband, Jacob, now say stupid things for a living, claiming recently that David “raped” Bathsheba. She’s a holy grail that can’t be criticized without consequences, so says virtue-signaling extraordinaire, Chris Bolt.

At the time, Bolt went so far as to say, “If I were Founders, I would fire the video editor, issue an apology to the Denhollanders, and try again, although credibility may be shot. You fumbled the ball.”

There’s hardly an issue anywhere opined about in social media where Bolt doesn’t project himself as a supposedly ‘conservative’ voice right before making a gratuitous public display of affection with the liberal position.

If I could summarize Bolt’s position on any given topic it would be, “I am a true conservative, but [insert liberal position].”

Watching Bolt over the years, I’m genuinely shocked that the man has the lack of self-awareness necessary to show his face in public, given the fact there’s not a single position he’s taken on any particular issue that has aged well. Bolt should write a book entitled, Unconquerable Ignorance: How To Be Demonstrably and Proveably Wrong On Every Issue And Continue to Opine Like You Know What You’re Talking About.

With his expertise, it would be a best-seller.

I wrote about Bolt’s track-record of being embarrassingly wrong in the article, Chris Bolt and the Poorly Aged Obese, Cigarette-Stained, Sweat Pants-Wearing Prom Queen. I pointed out how reading Bolt’s old articles attacking discernment ministry is like watching Baghdad Bob reruns shortly after Saddam was found in a spider hole; history proved him wrong over and again. That post was written because I saw Bolt rear his head in social media again like a Whack-a-Mole Game of Stupidity. Bolt had claimed that Matthew Hall, the SBTS provost who said clearly on video that he was a racist, didn’t say he was a racist.

Adding deaf and blind to the list of Bolt’s shortcomings that also include aloof and stupid, I was taken aback that his perennial wrongness hadn’t yet shamed him under a rock somewhere. But nope, there he is contradicting bald facts again.

I knew Founders was going to hell in a handbasket when Tom Ascol posted an article claiming that Matthew Hall ‘rejected Critical Race Theory’ based on a private phone call with the provost, despite Hall being on video and audio recently espousing Critical Race Theory, with Ascol chalking it up to “confusion.” Proving that obtuseness, gullibility, and moronic naivety could be an Olympic sport in which he could get a gold medal, Ascol shrugged-shrugged and winked-winked his support for everything and anything related to Albert Mohler like Dr. Faustus sold his soul to the devil. I have to wonder if Ascol’s recent health scare might have been due to an overdose of gullibility in the bloodstream or perhaps complications from a bilateral orchiectomy.

I most know Bolt from his repeated 2015 defenses of Karen Swallow Prior, the radical feminist, animal rights activist, and bleeding-heart leftist who was eventually punted out of Liberty University for being too liberal but found her way to Southeastern Baptist Theological Seminary in the made-up position of “research professor.” Somehow her career studying English Literature and helping homos come out of the closet qualified her for payroll at a Southern Baptist Seminary.

We first wrote about Prior in the post, Gay Affirming Research Fellow at ERLC: Shocking Liberalism, which has only aged like fine wine. At the height of Bolt’s defenses for the homely beldam that has cast enchantments upon so many, Prior claimed abortion was not murder in Christianity Today and said that calling abortion murder was unchristlike. That quieted most Karen Swallow Prior defenders for some time, except for Bolt, who excused away her words as muddled and poorly written. In the first article we wrote about her (linked above), we pointed out that Prior was busy taking selfies with sodomites on the red carpet. Five years later, Prior’s first act as a new Southern Baptist employee was to post more selfies with those same sodomites to her Instagram. She’s a gross human being, which we’ve spent five years documenting.

How could someone who defended Karen Swallow Prior as a “strong conservative” in 2015 seriously show their head in public in 2020? If unconquerable ignorance was a superpower, Chris Bolt would be Captian Marvel.

Only yesterday, Bolt wrote an insanely long article about a Twitter dispute he had gotten into, and referenced this publication as a “discernment ministry,” with the scare quotes included.

This same five-star moron who defended Karen Swallow Prior as a “conservative” insinuated that this publication isn’t accurate? Forsooth! Compared to Chris Bolt, this publication is written by infallible prophets. What would be a career-ending mistake in discernment ministry, to be so catastrophically wrong on an issue so definitively proven over time, is somehow just a hiccup in Chris Bolt’s vocation of perpetual wrongness.

Only yesterday this novelty clown-hat of a pastor lectured the world to “trust the trustees” at Southern Baptist Theological Seminary and Southeastern Baptist Theological Seminary, sounding like the second coming of Company Man™ Dave Miller. I’ll remind you that the latter group of trustees took no issue with Danny Akin doing a video advertisement/endorsement for an anti-Christian, pro-LGBT atheist campaign (for the sake of record I feel it necessary to say I kid you not). “Trust the trustees” is literally asking Southern Baptists to do what is precisely against their best interests. It’s basically like asking Rachael Denhollander to trust her doctor.

So then, why is Founders Ministry letting Chris Bolt – who has promoted every liberal cause and defended every liberal leader in the Southern Baptist Convention – write a series of blog posts for them?

I stand amazed – genuinely amazed – that Founders Ministries, with all their various problems, let a festering wart of ignorance like Chris Bolt publish on their website.

The article series is about Revoice, the pro-LGBT Conference born in the heart of Southern Seminary by Mohler protege, Nate Collins, and endorsed (both before and afterward) by Karen Swallow Prior. One can bet that Bolt won’t trace the poisoned stream back to its wellhead, which lies at the door of Albert Mohler. One bets that Bolt won’t explain that Mohler himself laid the groundwork for the Christian Same-Sex Movement by denouncing reparative therapy and exalting so-called “sexual orientation” at the Breaking Bread Conference with “gay Christian leaders” in 2014. One can bet that Bolt won’t explain that the intellectual work for the entire Revoice movement was laid by Rosaria Butterfield’s contributions on ‘hospitality,’ who is now quoted by Preston Sprinkle and JD Greear in their capitulation on pronouns.

Founders Ministries was effectively gutted by the events this summer. Ascol has apparently lost the will to fight and has let go of any semblance of common sense he had left. By all appearances, it seems that Mohler’s dark empire has commandeered Founders Ministries as his own puppet. Ascol has apparently rolled over and shown his soft underbelly to the Southern Baptist deep state, content to be petted by the very people selling out the Convention he wishes to save.

Chris Bolt writing at Founders is a sad demonstration of the death spiral at the organization going on underneath the calm waters. Whatever it once stood against, Founders has now become.