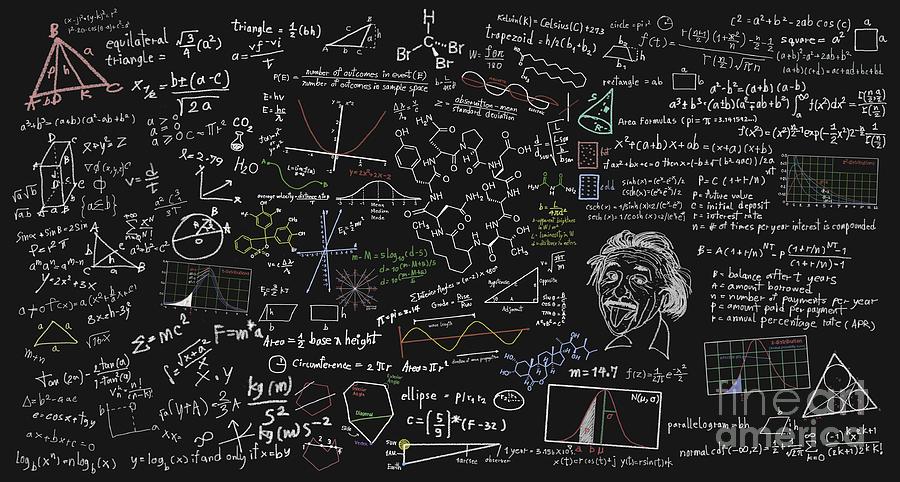 Amidst denominational decline, Lifeway Christian Resources has helped to fudge the numbers of membership, baptism and active churches in the SBC. Even in spite of their dishonest reporting and shameful spin, the denomination continues to shrink. As the nation’s largest Protestant denomination becomes increasingly liberal and progressive, the actual numbers show that their leftward trajectory has only led to a decrease in size and influence.

When my church was still Southern Baptist, associational missionary and NAMB employee, Eddie Smith, called to ask me to report our services held on the nearby Indian Reservation as a “church plant.” I declined, considering the church had been there for more than a decade and was listed as a Southern Baptist church plant once already, back when Tennessee Baptists started the work. The only thing “new” was our church’s involvement. That same year, I was asked to list a number of other Bible studies as “church plants” on the ACP. Again, I declined because Bible studies aren’t church plants. That same year, Montana Executive Director, Fred Hewitt, called to ask me to persuade a number of Calvinist SBC churches in Montana to fill out the Annual Church Profile (ACP report), which they had stopped doing out of protest of the Convention (I agreed and tried to persuade them to fill out the ACP). Later, when the ACP report came out, I saw that the associational missionary had changed my ACP to reflect a number of “church plants” that I specifically and explicitly told him were either not churches or not new. When the Big Sky Baptist Association formally asked for Fred Hewitt’s resignation, a number of pastors acknowledged their ACP reports had been changed or they were encouraged to lie in their reporting.

What’s recently been reported by the Baptist Press demonstrates that this level of number-fudging is happening on a grand scale.

To quote the Baptist Press spin-article, “The number of congregations cooperating with the Southern Baptist Convention increased over 2016 totals, while reported membership and baptisms continued their year-over-year decline.”

How does congregation number increase and over-all membership decrease, as it has repeatedly in recent years? The North American Mission Board (NAMB) throws money at “church plants,” which most of the time amount to little more than (1) a severing off a larger congregation to plant the smaller congregation, with no actual increase in Southern Baptist membership, (2) many Bible studies and parachurch meetings are being called “church plants” for the sake of the Annual Church Profile, and (3) many- if not most – Southern Baptist church plants (especially those planted by NAMB) fail, but aren’t removed from the list of active churches in SBC reporting.

Church planting is an absolute mess in the SBC. The simple but true secret is that most church plants simply don’t work out, and when denominational NAMB funds run out, they close down. However, their churches still exist on paper in the denomination that keeps adding churches but is mysteriously losing members.

While the number of churches increased by 150 denominationally-wide, membership and baptism continued to shrink. The only thing to increase (and only marginally) is the money given to the Cooperative Program. That money is then thrown into an inefficient church planting process that gives a false glimmer of hope to a dying denomination.

Scott McConnell is the executive director of Lifeway Research, which compiles data from the Annual Church Profile. In spite of associational missionaries having the primary job of getting churches to submit their ACP reports (that’s their top function), 3 in 10 Southern Baptist Churches chose not to submit the ACP data. Please note that submitting the ACP is really the bare minimum of cooperation with the denomination. Thirty percent Southern Baptist churches appear to want nothing to do with the Southern Baptist Convention itself. Since 2016, the number of churches participating in the ACP is down by 3 percent.

According to the Baptist Press, “LifeWay Research conducted additional analysis this fall on reporting patterns and created estimates for non-reporting congregations.”

In other words, for churches not reporting the ACP, Lifeway just made up “estimates” for their membership, attendance, receipts and baptisms and included it in their reporting. Look below. 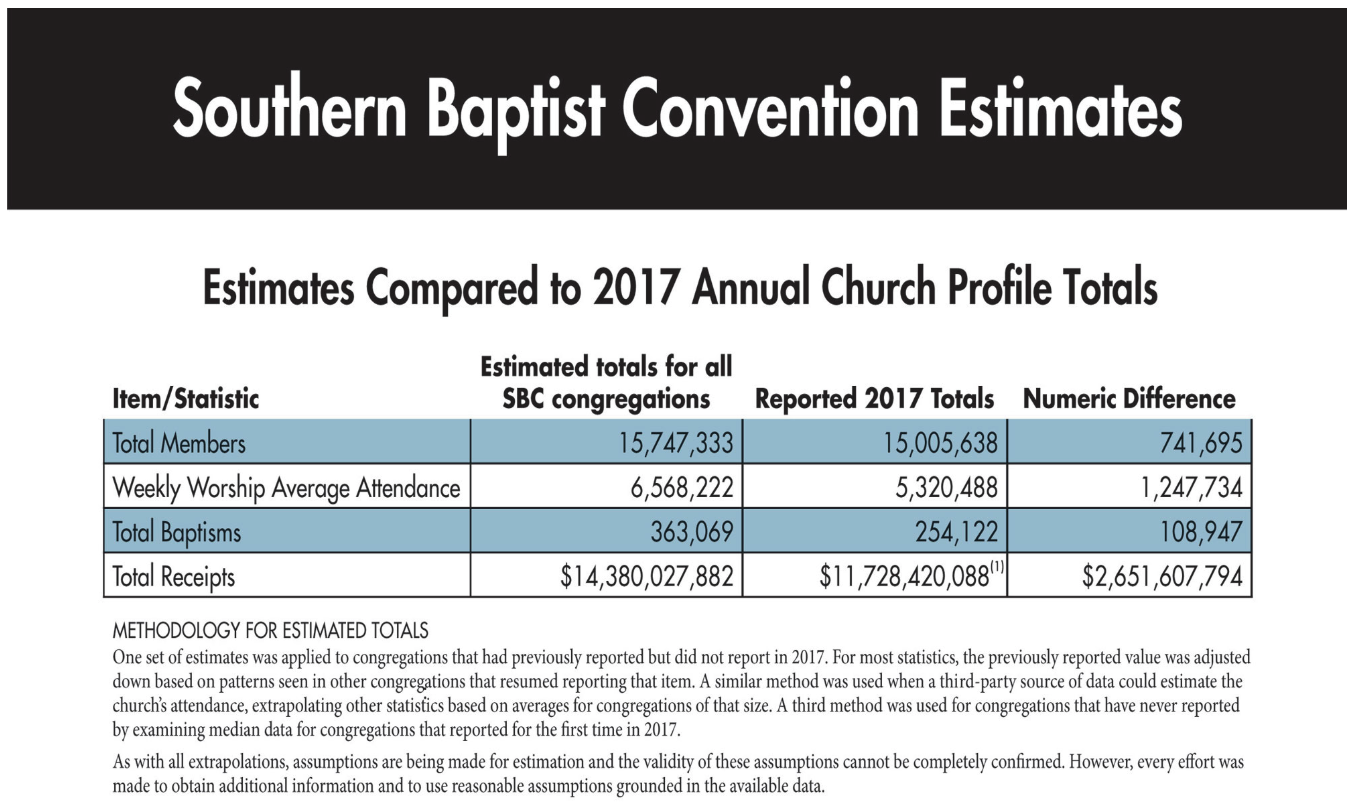 Lifeway Christian Research claimed in the small print (screenshot above) that the figures they provide are only “assumptions.” Their assumptions are based upon developing a median average of statistics from churches of similar size. The problem is, they must use the size of the congregation as last reported. There’s no guarantee that the church not reporting is of similar size as the year they last reported. Neither does this formula take into account that churches of the same membership size can vary wildly in attendance, based upon whether or not they regularly purge their church rolls. Likewise, as any pastor can tell you, things like baptisms and giving receipts can vary so drastically from year to year their prediction is next to impossible.

Likewise notice (and this is pretty funny, all things considered) that Lifeway even came up with numbers for churches who have never reported the ACP. How do you come up with data for a congregation that has never reported? According to the screenshot above, they created their estimate based upon churches that reported for the first time in 2017.

Many of those churches that have “never reported” on the ACP have never reported because they don’t exist. They were just a number fudged by an associational missionary or NAMB church planting catalyst. They’re imaginary. They don’t gather. You can’t meet with them on Sunday. They don’t assemble. They’re not a church. They’re non-existent. But that doesn’t stop Lifeway from assuming their stats match those of churches reporting for the first time in 2017.

In reality, churches who don’t fill out the ACP report either (1) don’t exist, (2) are so small they don’t have secretaries who fill out reports and they have bi-vocational pastors who don’t have time, or (3) they don’t like the SBC and just don’t care to send a “Dear John” letter to the Executive Board of the SBC telling them to go jump off a cliff.

Notice (again, from the screenshot above) that Lifeway tried to obtain data from “third-party” sources about a church’s size. This means they’ve tried to get ahold of the pastor and church, and no one will even return their call or email. They then turned to “third party sources” to try to estimate those numbers, and your guess as to what that means is as good as mine (my guess is that it refers to associational missionaries, who are asked by Lifeway to guess the stats for the non-reporting church).

Because of the fudged numbers, the stats are showing 15.7 million members nation-wide opposed to the 15 million that were actually reported. Likewise, it increased baptism figures by more than one hundred thousand and increased receipts by 2.7 billion.

Even that fudging can’t change the fact that the SBC is going south as quickly as Russell Moore is going left.

McConnell told the Baptist Press that the decline in baptism is “in part due to a lack of reporting.” And yet, he also acknowledged the SBC was in decline.

Those churches not responding to the ACP should not have their numbers made up and magically added in to SBC stats. Rather, those churches should have their numbers removed from Lifeway stats because those churches either don’t exist or they want nothing to do with the SBC. If you compiled those numbers and subtracted them from the figures of Southern Baptist churches, it would create an accurate picture of how badly the Southern Baptist Convention is doing.

Instead of working on basic concepts like church membership, missions giving and baptism, Southern Baptist leaders and Southern Baptist entities – from Lifeway to NAMB to our seminaries – have been fixated on Social Justice. It’s no wonder the denomination is in decline. 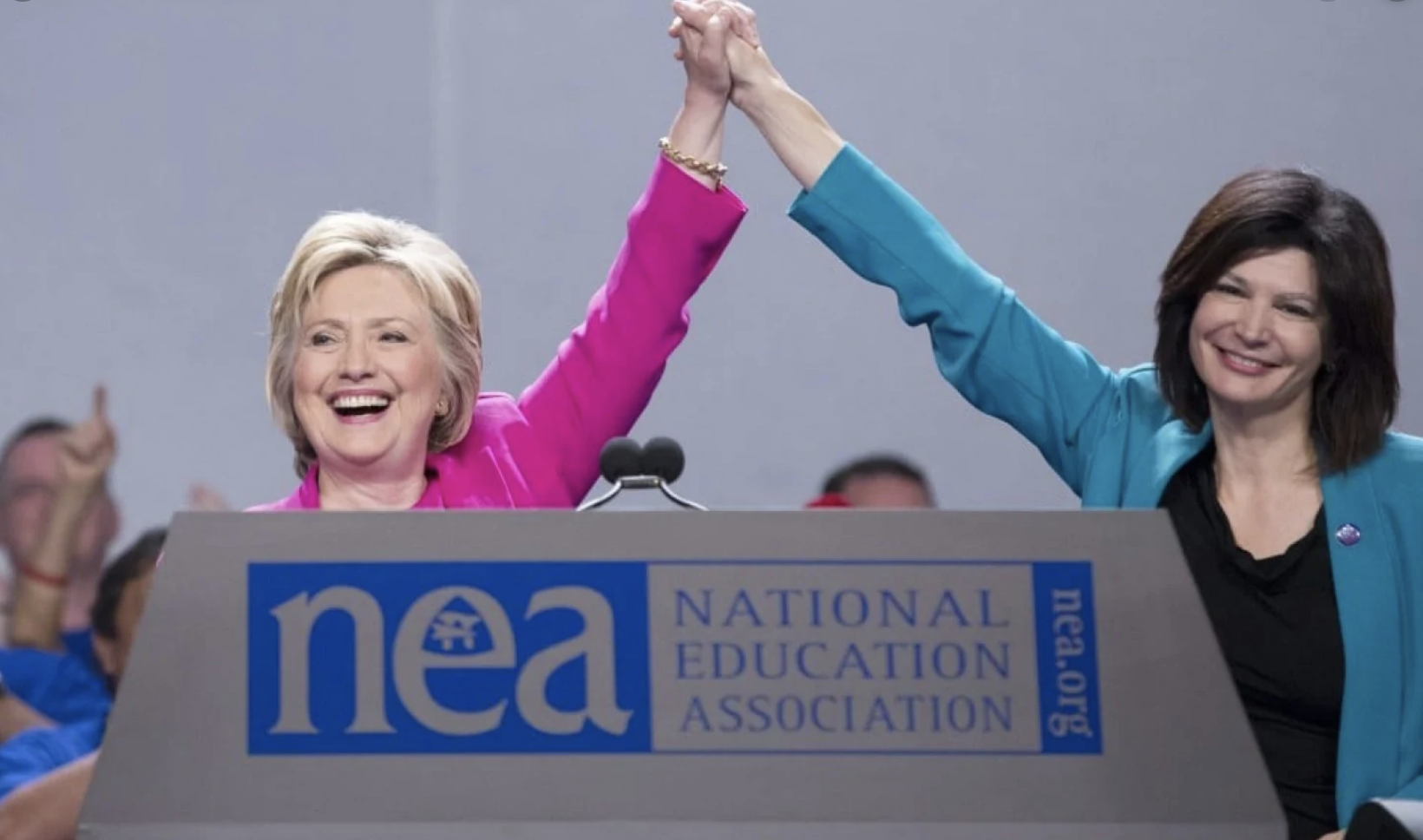 A Refutation of the ‘Theology of the City’ (Part I)

ERLC Spends Less Than 1% on Public Policy and Research, 69% on Staff and Travel