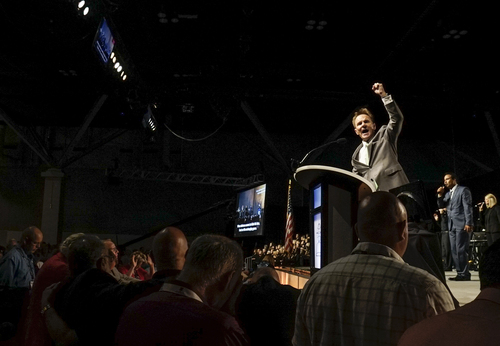 If you web wander over to the Baptist Press today (June 15) – today being the day after Ronnie Floyd’s 2016 National Call to Prayer for Spiritual Leadership, Revived Churches Nationwide, and Global Awakening – you will find numerous stories about the Southern Baptist Convention’s second day of business.

There was, of course, the vote for a new president which, according to the Christian Post, could be a turning point for the convention as it determines “whether Millennial Reformed Theology Represents The Future” for the denomination. The vote, if you don’t know, lacked the necessary majority.   It has gone to a runoff with consideration of the issue carried over to today’s business.

Then there is the bold, self-aggrandizing move as the messengers collectively voted to repudiate the display of the Confederate flag. Evidently our politically correct response to the symbols of a world out of which we are called to be separate took precedence over the actual substance of the Gospel, which, by the way, was not proclaimed during the charismania-lite emotionalism of the evening.

Oh, by the way, while the SBC officially judged the Confederate Flag to potentially be a “stumbling block,” no resolutions were considered about Russell Moore’s behavior, effectively aligning the convention with the flag of Islam. I guess that’s not as much a stumbling block because, how can we contextualize the Gospel if we don’t sing kum-bay-yah with the very face of evil on the planet?

Two articles, as a matter of fact, on Baptist Press highlight that very spirit of kum-bah-yah-ism.   The SBC Pastor’s Conference focused on effective evangelism, which, according to convention-exiting, ecumenical Ed Stetzer means churches “should develop new strategies for evangelism to reach an unbelieving world.” Apparently unaware of the obvious contradiction, Stetzer later mentioned that “We have a nation with open hearts and a church with closed mouths.”   Hmm. If they have open hearts, why the need for a new strategy, one wonders.  Never mind that “no one seeks after God.”   (Romans 3:11)

In another moment of Biblical disregard, false teacher, and circle-prayer-caster Anne Graham Lotz urged pastor’s wives to “lean into culture” because, as any SBC pew sitter will realize, we just don’t have enough world in the church already.

What isn’t yet reported in the Baptist Press is a review of last night’s prayer extravaganza. So let me give you a few one-liner zingers whizzed out by speakers and pray-ers on the dais, a dais, by the way, visually devoid of actual copies of Scripture. (It did have the American flag, which is evidently an acceptable flag of allegiance since it – rather than Scripture – most closely defines the flavor of “Christianity” for Ronnie Floyd’s SBC.)

There was “rejecting the devil in Jesus’ name.” Because, although Satan is a single created being who lacks such attributes of God as omnipresence, he apparently is all places at all times and is targeting every single Southern Baptist pastor and pew sitter. Forget the depravity of our own fallen nature; let’s rebuke the devil instead.   One wonders why Floyd and others did not, instead, remind believers that, according to Jesus’ prayer to the Father in John 17, we are assured of being kept by Him. (Biblical truth doesn’t sizzle or sell that well in the SBC, one must presume.)

There was lots of Holy Spirit chatter, prayers, and emotionalism. I caught this line from the frenzy, an appeal for God to make us “blaze with holy fire.” (Umm, yeah.   Just an FYI. The Holy Spirit NEVER points a believer to Himself; He always points us to Christ. And He always does that by illuminating the Word.)

The “holy fire” theme was introduced by what was a Hollywood-worthy, wide-screen video (We just can’t do anything in church these days without a big screen, huh?), complete with a mood-setting (manipulating?) musical score, in which various SBC’ers spoke in various tongues (no, not those kinds, though they would have fit right in with the intentional emotionalism of the event) from the words of Ezekiel.

“Entertainment is the devil’s substitute for joy. The more joy you have in the Lord, the less entertainment you need.” Leonard Ravenhill

Momentarily adopting, it seemed, yet another moniker, Ronnie “Ezekiel” Floyd “named” the promise of “raising dry bones to life”, and then later “claimed” it in the name of Jesus. (Yeah.  No.  I’m not kidding.  No Gospel proclamation needed, just a name it and claim it procedure.)

Not only did “Ezekiel” Floyd, and others, “name it and claim it” on a multitude of wrongly-interpreted “promises” of Scripture, he led the assembled to “pray down racism” – however one does that – and prayed for  “hedges of protection” to be divinely strewn all around – again, disregarding the assurance we have from Christ’s high priestly prayer.

In all, the event resembled nothing that one might remotely view as “Southern Baptist” but could, much more accurately, consider appropriate to the doctrine-less, false fodder promoted by a Benny Hinn-type, coat-swinging, miracle-inducing charlatan show on TBN.  (Well, the event was broadcast on DayStar, sandwiched between “Breakthrough With Rod Parsley” and “Discover the Champion Within” Joel Osteen.) The whole event oozed with Scripturally-illicit commentary, Christianized appeals to the Divine, and a Holy Spirit seeking emotionalism that was decidedly either the result of a poor interpretation of Scripture, or just an outright denial of Scripture.

Floyd’s group-led gala entreating the Lord for a revival in the church and awakening across America noticeably lacked two necessary elements – Scripture and repentance. While the presence of a visible copy of the Holy Writ was absent from the platform of platitudinous pleaders, none of those supplicants, including Floyd, first bothered to call the SBC, the church, to repentance, particularly repentance from sinful unbelief in the sufficiency of His Word.

The problem with the SBC isn’t that God is withholding revival. The problem with America isn’t His withholding of awakening. The problem is that the SBC – and so much of the evangelical church itself – has set aside the sound teaching of Biblical truth, instead seeking the touchy-feely warm fuzzies that seem to soothe the unrepentant soul. Rather than edifying the believer, the SBC pursues ecstatic entertainment to appeal to goats.

If you’re a Southern Baptist, you should be grieved that our convention has walked away from Scripture and is embracing feelings as faith, all the while ignoring the facts of the Gospel as the only force that will truly, authentically, save.

Indeed, though Floyd bemoaned “a loss of spiritual passion in our membership,” the real problem is the loss of Scriptural obedience in our pulpits, pews, and, perhaps especially, among our leadership.

Though these days in America we’d hardly doubt Calvin’s words, “When God wants to judge a nation, He gives them wicked rulers,” you’ve just gotta wonder … how does He do it with a denomination? Perhaps that’s exactly what we’re seeing within the SBC.

The following is a re-cap of Tuesday night’s “Call to Prayer” rally at the 2016 SBC. 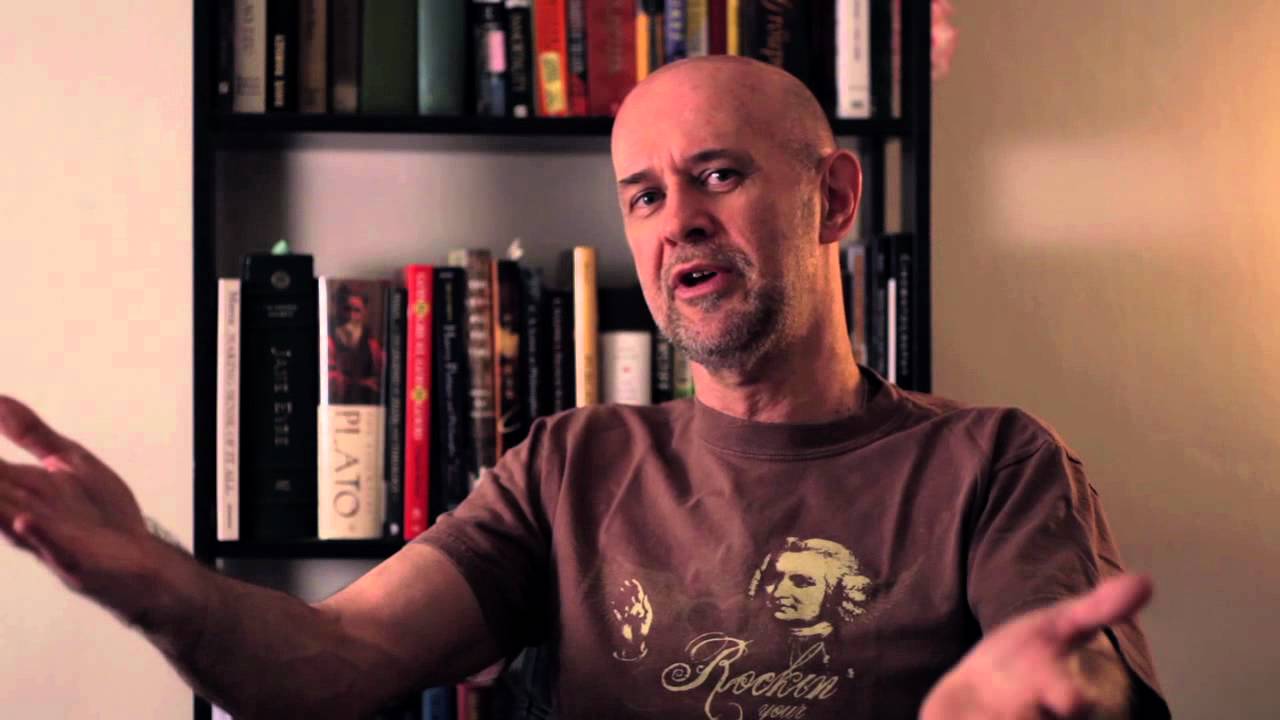 The Purgatory of Jerry Walls, and its Anti-Calvinism Origins 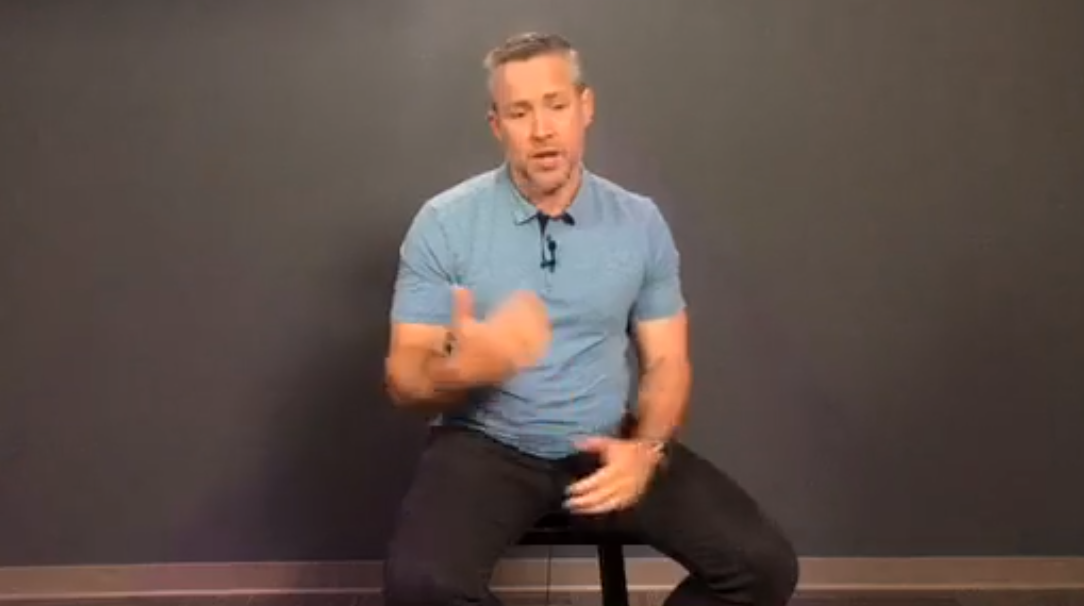 Pandering to the Culture: A Response to JD Greear’s Video