Last night’s caucus in Iowa can be summed up by one term; anti-establishment. A majority of Iowans chose to support one of two candidates that the Republican political establishment absolutely despises. The first is a billionaire whose real-life persona actually exceeds his caricature in outrageousness. The other, unlike the former, has actual long-time convictions and seems to have some vestige of a soul. Cruz’s entire, short career in political office has bore witness of those convictions and he’s acted accordingly, and some would say, has acted with reckless abandon in a head-strong, undiplomatic and brash git ‘er done attitude.

Cruz, like him or hate him, has one thing in common with Barrack Obama. He has done in office exactly what he told his supporters he would do. And this has not endeared him to the party establishment, who are very overt – almost explicit – in their desire that Republican office-holders be more beholden to them than to their constituency. Cruz, from the beginning, has refused to bend his ear to the party establishment and has broken all rules of party decorum. This has caused establishment Republicans like John McCain to call him a “wacko bird” for challenging party big-wigs, like when he compared Republicans bending on Obama Care to Neville Chamberlain’s compromise with the the Nazis, accused Mitch McConnell of lying, and even Rand Paul claimed Cruz was “done for” because he hadn’t made enough “friends” in the Senate and is ostracized by being odd-man-out.

Meanwhile, the people love the Wacko Bird. The establishment loathes him as much as it loathes Donald Trump. And the people came out in a majority (and nearly a super-majority when you add together the votes for lesser non-establishment candidates that include almost everyone besides Bush or Rubio) to support candidates the establishment despises. And good for them. Most conservatives either want Washington reformed or burned down (and don’t care which), and between Trump and Cruz, at least one of those two options seem likely.

There is absolutely no doubt that the evangelical establishment is promoting the very same candidate as the Republican establishment – Marco Rubio. Their ecumenical sentimentalities allow them to promote Rubio – a Roman Catholic – as a Christian and even as an evangelical. Their intellectual snobbishness insinuates support for all other candidates indicates lesser cognitive capabilities, and they present other candidates as  downright Cro-Magnon. Their social-gospel and socially progressive leanings make them naturally coalesce around the moderate Republican candidate. And that they think so differently from the typical pastor or church goer is all the confirmation they need that they’re supporting the right candidate.

A Lifeway poll just five days ago demonstrates the divide between pastors and the Intelligentsia/Insiders/Establishment. The poll demonstrates that pastors in Iowa preferred Cruz to Rubio by a whopping 21 percentage points.

No matter how much Russell Moore, Phillip Bethancourt (VP of the ERLC), Eric Teetsel, Denny Burk, Wayne Grudem and others tried to convince us of, those pastors clearly didn’t believe their assertion that a Roman Catholic was a fellow evangelical – no matter how often Rubio talked eloquently about Jesus.

The EI tried to convince us that the “future of evangelicalism” would come out in support of the Roman Catholic candidate. Well, goodness. I hope that’s not true. You know, Protestantism and stuff. They’ve attacked the non-establishment candidates as either not being Christian (Trump) or being from “the Jerry Falwell wing” (Cruz), while promoting a papist as a Christian… 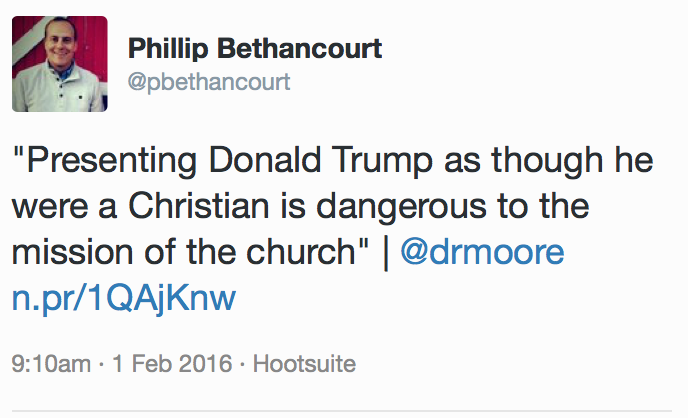 Of course, Phillip Bethancourt and Russell Moore – by this standard – are enemies of the church for presenting a papist as a Christian. Essentially, the EI have sold out the Gospel and the doctrine of justification by faith for political purposes. We shouldn’t forget that and neither forgive it without genuine repentance on their part.

Now, consider the Lifeway poll in which there was overwhelming pastoral support fro Cruz. Compare it to a poll from World Mag in regard to “Evangelical Insider” support for Marco Rubio.

Clearly, “evangelical insiders” have only a marginal effect on pastors. Ivory Tower memos clearly aren’t making their way to the pulpit.

Here is an indisputable fact, just by crunching the numbers: If pastors were pushing the pews to vote the way the Evangelical Intelligentsia wanted them to, Rubio would have won by no small margin. For all the “pull” in places like the ERLC and Gospel Coalition, it didn’t saturate the church culture.

And that’s a reason to be happy.