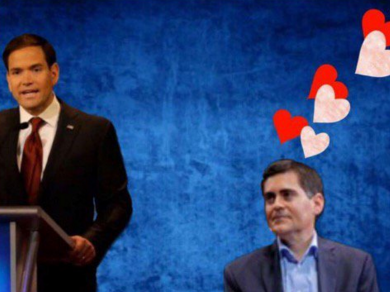 Russell Moore has led the support for Rubio, albeit stopping short of officially endorsing him. Moore, a former democratic staffer (source link) for Democrat congressman Gene Taylor – who Moore has said was more “a Republican in everything except name” (source link) but in fact voted repeatedly against most tax cuts, coalesced with fiscal liberals repeatedly while still maintaining props as a “Blue Dog Democrat” (source link) but only receiving a “conservative action score” (a popular ranking of a congress-person’s conservative or liberalism) of 30 percent (source link) – has repeatedly dogged Rubio’s two front-runner competitors, Ted Cruz and Donald Trump, while consistently praising Rubio.

The reason the Evangelical Intelligentsia (EI) support the Roman Catholic candidate so strongly is for a number of reasons, including (1) The EI, as a part of keeping their secular intelligentsia street cred – which is incredibly liberal – they will never, ever support the most conservative candidate in any contest (2) The EI is very ecumenical, and has absolutely no problem partnering with Roman Catholics to accomplish social justice goals (3) The EI, led by Russell Moore – no doubt taking a cue from his Democratic past – is for open borders amnesty, as is Marco Rubio (4) EI debutant and darling, ecumenist Manhattan Declaration director Eric Teetsel (who I call Eric Tetzel for the inner chuckle) is now employed by the Rubio campaign. The role of Teetsel in this cannot be over-stated, getting his friends like Russell Moore and The “Gospel” Coalition compatriots to throw their gentle nods behind Rubio.

Pulpit & Pen has chronicled (see the hyperlinks in the first paragraph) the EI and their associates throwing support around a candidate in the Republican primary who is nowhere close to the most conservative, and who is a non-Christian, while actual evangelical candidates (and no, I’m not referring to Trump) are castigated. A question we’ve repeatedly asked of Southern Baptists is, “Are you okay with your chief ethicist and SBC entity head  overtly supporting a RINO Roman Catholic?” Perhaps the IRS would be interested in the question for different reasons.

Moore co-wrote an article with Marco Rubio entitled Marco Rubio and Russell Moore: This Christmas, we must remember slaughtered Christians in the Middle East in the Washington Post. Throughout the article, Moore slams GOP frontrunner, Donald Trump (linking to previous articles by Moore on Christmas Eve, denouncing the billionaire candidate).

Both of us are of the Christian faith, and are reminded of the fact that tens of millions of our fellow Christians face violence, oppression or harassment in more than 100 nations around the world…

It’s doubtful that Moore would have ever written such words with a Roman Catholic if it weren’t for political purposes. As I’ve repeatedly said, “The only thing a Roman Catholic needs to do to be considered converted by Southern Baptists is run for office.” Moore is proving the adage true, that when you mix politics and religion, you get politics. What is being lost in this discussion, for political purposes, is at the heart of the Gospel and what makes one born again.

The very next paragraph quotes the Pope of Rome as an authority. I kid you not. The ambiguously progressive duo continues…

We, of course, care deeply about defending our fellow Christians, but one does not have to share our religious conviction to see the moral obligation that belongs to us as Americans.

The rest of the article is basically Rubio and Moore glad-handing one another for their sensitivity to the persecuted church in a way that is totally not politically motivated propaganda meant to endorse a particular candidate for office (**wink wink**).

Precisely because the persecuted church is so important, it’s sad to see the issue turned into a partisan mule meant to be a self-serving political juggernaut to lure evangelicals into voting for a Roman Catholic candidate. And that’s precisely what Russell Moore has done.

As the International Mission Board is pulling away hundreds of missionaries from the foreign mission field because of budgetary issues, the 3.53 million dollar ERLC budget is allowing Russell Moore to effectively serve as unpaid staff of a Roman Catholic candidate for office. What Russell Moore is doing will be the very thing that gets 501(c)3 status removed from churches and charitable organizations, which is the very kind of thing the ERLC is designed to prevent.

Pulpit & Pen may be spitting into the wind on this one. Does anybody care? Got me. But we’re still going to be pointing this out at every opportunity. Sooner or later, Southern Baptists or the Internal Revenue Service might notice. 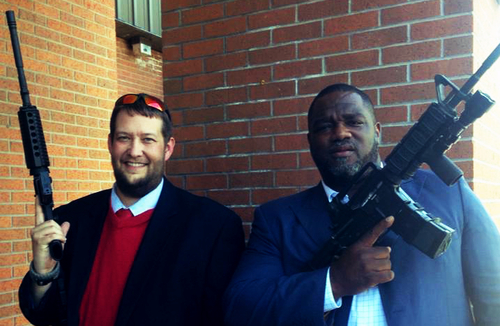 A Response to John Piper: Why Gun Ownership is Biblical and Good

Was the Apostle Bartholomew even Martyred? Myths that’ll Preach 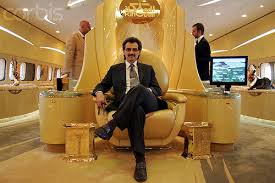 Podcast: Need Me A Plane