… it’s never been about “getting” Ergun Caner.

Every time that there’s news on the Ergun Caner front, the question always comes up, “Why are you guys still going after Caner? He’s done! Put a fork in it and move on.” 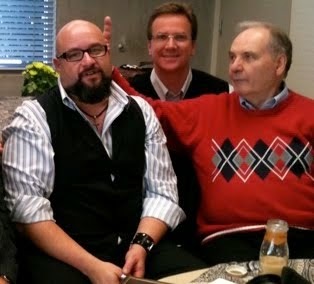 The problem is the corrupt Good Ol’ Boy Network® that continues to prop up frauds like Ergun Caner. Just consider this list of people who have defended, supported, and promoted Ergun Caner since his lies and deceit was exposed back in 2010: Norman Geisler,Paige Patterson, John Ankerberg, Mac Brunson, Johnny Hunt,Bucky Kennedy, and, of course, Ergun’s brother, Emir Caner. There are more names than that, of course, but these have been the major players in what James White termed so aptly as “The Great Evangelical Cover-Up.”

Here’s the thing, the evidence for Ergun Caner’s pattern of lies is so overwelming and voluminous that these men knew – had to know, at least since mid-2010 (& Emir knew from the very start!) – what a fraud Ergun Caner is. Yet these men continued to promote Ergun Caner, to place Ergun Caner in front of unsuspecting audiences and church congregations, to encourage unsuspecting parents to commit their children’s education to Ergun Caner. This is the issue, and it is a far, far bigger issue than just Ergun Caner. Caner is not the first fraud who has been put forth, only, perhaps, the most prominent to be exposed. If nothing is done, if things are not changed, Caner will not be the last fraud perpetrated upon an unsuspecting church.

Ergun isn’t the real issue. Which is why “getting rid” of Ergun has never the goal. Norm, Paige, John, Mac, Johnny, Bucky, Emir, and the corruption they represent; that’s the real issue.

And that is the real reason they don’t want anybody talking about it now.

Catching Up with the Protestants: Catholics Publish New Bible