“I want to put a stone in his shoe.  All I want to do is give him something worth thinking about.  I want him to hobble away on a nugget of truth that annoys him in a good way, something he can’t simply ignore because it continues to poke at him.” Greg Koukl

Dr. Gary Habermas has made a career as a Christian Apologist by making what he calls a “minimal facts” case for the resurrection of Jesus Christ.  Rather than bogging himself down answering arguments about where Cain got his wife or how a loving God could have flooded the whole world killing all but eight people, Habermas asks unbelievers to consider what the minimal historically agreed upon facts about Jesus’ death and burial say about the person of Jesus.  Habermas seeks to show that these facts point to a resurrected Jesus who has proven his deity.  In doing so, he sidesteps presuppositions and emotional hang-ups that objectors to Christianity might have with other parts of faith and practice.  Once the unbeliever comes to accept the miraculous resurrection of the Lord Jesus Christ, the case can be made to him for the whole of Christian faith.  I suggest that the same “minimal facts” approach can be used to point emotionally over-invested and criticism-prejudiced women away from an unhealthy dedication to Beth Moore, whose statements and actions indicate that she is no longer a suitable Bible teacher.  I believe that concerned friends and family members can use a minimal facts case to put a stone in the shoe, as it were, of a loved one who will refuse to listen to a prolonged critique of Moore. Such a case can be made without addressing Moore’s exegetical errors, without making a case for cessationism (which many women will out-rightly reject), without getting into the sensitive issue of whether or not women should preach in front of men, and without having read any of Moore’s books thoroughly.  Making such a minimal facts case can be a quick first step to helping a loved one break free of Beth Moore.

Beth Moore endorsed Joyce Meyer. Moore went on Meyer’s show “Enjoying Everyday Life” to talk about unity and claimed that the Lord has blessed Joyce Meyer.  Moore stated, “I offer you my respect, I offer you my esteem.  You are a mighty, mighty woman of God.  You have run and are running your race well.” This statement is on video for all the honest world to see.

If you’re talking with someone who doesn’t understand that Joyce Meyer is a false teacher, Beth Moore is not her biggest problem.  However, many evangelical women already understand that Meyer is someone who should not be respected as a Bible teacher.  Moore says otherwise. Make them wrestle with that.  Would they sit under a pastor who endorsed Joyce Meyer?

Many evangelical women will already understand that Joel Osteen is a prosperity gospel preacher.  Conservative evangelical pastors often condemn the “God just wants you to be happy” message of Joel and his wife Victoria.  Don’t get bogged down with “contemplative prayer” issues.  Many evangelical women don’t know what that is. However, they do know that mystic Roman Catholic = bad.  Aren’t we saved by grace?

Beth Moore doesn’t just make the modest claim that the Holy Spirit lays things on her heart.  She claims very specific revelation from God about what to write and sell in books.  In her Book, “The Beloved Disciple”, Moore writes, “Recently God spoke to me about capturing what He and I are calling ‘Sabbath moments.’”

It’s not just that the Holy Spirit convicted Beth Moore that she needs to rest more often.  That’s completely normal.  It’s that God supposedly marketed the name “Sabbath moments” with Beth Moore as if they were cube mates in the marketing division at LifeWay Christian resources. That’s kind of creepy, in my personal opinion.  Beth Moore gets revelations from God and then sells them.  She earns six-figures from Living Proof Ministries.  For how much did Paul sell his revelations?

Beth Moore, while not out-rightly claiming to have Apostolic authority, presents herself as one who does.  Beth Moore claims to have had prophetic visions of “downpour” from God and, poisoning the well, claims that people should be prepared for other Christians who scoff at her questionable visions.  Furthermore, Moore opened her Bible study book “Children of the Day” with her own epistle to the Thessalonian church. Like Paul, Moore claims to have visions and writes epistles to biblical churches. This is a subtle statement that she does carry Apostolic authority.

Just ask your loved one if the above seems appropriate.  I believe Moore’s doing stuff like this is a psychological trick or at least a ploy to sell books in the Pentecostal demographic.  It makes her appear to have divine authority that others don’t have. What woman doesn’t want to have a relationship with God like Beth Moore claims to have where “He walks with me and he talks with me and he tells me I am his own?”

Using Your Own Witness

Brothers and sisters, remember that Justin Peters, JD Hall, Chris Rosebrough, Seth Dunn, or other such discernment ministers, theologians, or apologists don’t have the relational authority with your loved ones that you have.  If you think you are going to make the case against this woman:

by simply linking to these guys: 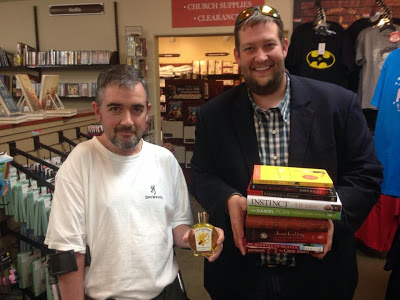 then you are mistaken.  They will esteem Justin and JD not.  It’s up to you and your prayers.  Use the hard work that Chris, Justin, and JD have done to be salt and light in the lives of women who desperately need strong, biblical, leadership.  When it comes down to it, Beth Moore is smooth talking woman who is relatable, well-dressed, and easy-on-the-eyes.  Women want to be like her.  If you are going to try to convince them that they should not be, you’ve got a tough row to hoe.  Good luck. (Remember you don’t have to make the case about every false teacher and false teaching all at once.) I hope a minimal facts case will help you.

One more thing to note: Don’t forget to first approach her husband if you want to directly engage a fan of Beth Moore who is married. Her husband is her spiritual leader.  Exhort him to step up and lead his wife away from the good feelings that LifeWay is trying to sell his wife. #the15