Much has been made lately of the ecumenism demonstrated by popular Southern Baptist figures Beth Moore and Rick Warren.  The ecumenism demonstrated by Moore and Warren is particularly disturbing because it includes, not just other protestant denominations that could be considered truly Christian, but the apostate Roman Catholic Church.  During at least one speaking recent engagement, Beth Moore brought a group of Catholic ladies on stage with her to demonstrate a “vision” of the church which she claimed to have received from God.  That vision of God’s church strangely included Roman Catholics.  As reported by Christianity Today, Rick Warren has recently traveled to the Vatican to speak at conference held by the Pope on the topic of “The Biblical Meaning of Marriage.”  While there he referred to the Pope as “the Holy Father” while making a public statement.  Incidents such as the above have left many Southern Baptists perplexed and even outraged.  Does Beth Moore really believe that God’s church includes Roman Catholics?  Does Rick Warren really believe that Pope Francis is the Holy Father?  These are interesting questions, but there is an even more relevant one:  Do Catholics buy books?

The answer is yes.

Like Baptists, Presbyterians, Methodists, Mormons, and Muslims, Catholics buy books.  Beth Moore and Rick Warren sell books…and they have been doing so for quite some time, mainly to evangelical Christians.  Beth Moore founded her ministry, Living Proof, in 1994 and since that time has sold thousands upon thousands of bible study books.  Rick Warren wrote his major work, “The Purpose Driven Life” in 2002.  Since that time it has sold over 30 million copies.   Is it possible that, after having been in the book publishing business for so long that Moore and Warren are experiencing market saturation?  It could be the case that all the Southern Baptists and evangelical Christians who are going to buy their books have already done so.  Atheists and non-believers certainly aren’t going to buy their books, so who is left? Nominal Christians like Catholics and name-it-and-claim it Pentecostals.  A desire to reach out to these segments of the “Christian” Publishing market could explain the ecumenism of Warren and Moore, as well as Beth Moore’s recent claims of prophetic visions and otherwise inexplicable appearance with false teacher Joyce Meyer. 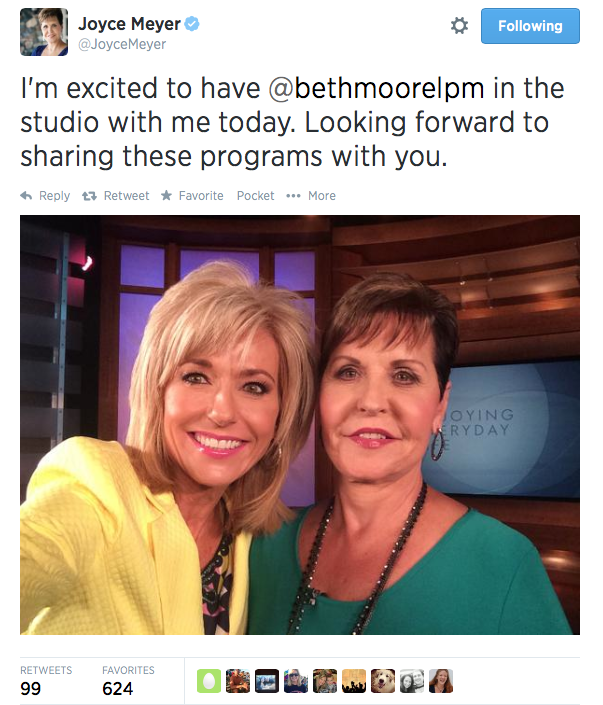 One shouldn’t believe for a second that the Bishop of Saddleback, Rick Warren, believes that the Bishop of Rome is a “Holy Father.”  I do believe that Rick Warren knows that millions of Roman Catholics throughout the world do believe that.  The Purpose Driven Life is the second most-translated book in the world, after the Bible.  “The Purpose Driven Life” may very well be translated into many of the languages that these millions of Catholics speak.

What else better explains the impetus behind the bishop[1] of an independent Protestant church in the United States (Saddleback) traveling across the ocean to the Vatican to speak at a conference?  It wasn’t “Bishop” Rick Warren that traveled to Rome but “Author” Rick Warren.  When it comes down to it, Rick Warren is known more for being an author than the pastor of a local church.  A Baptist assessing this situation should ask himself if Rick Warren seems more concerned with making his name greater in the Christian Book Market than shepherding his local flock.

What business does Saddleback or any other local Baptist church have with Rome, except to refute its false gospel and proclaim the unadulterated gospel of Jesus Christ as revealed in the Holy Scripture?

The answer is none…but then again sharing the gospel, unlike book sales, isn’t a bu$iness.

[1] Evangelical Churches rarely refer to their pastors as “bishops” but the terms are biblically interchangeable where Baptist church polity is concerned.

BPC Trustees: Caner Has Lied Like Coach o’Leary, But Still Deserves to Prosper