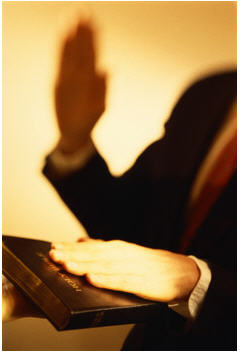 …But if you do make ’em, you might want to think about keeping ’em.

Let’s explore this topic together with the help of an obscure passage referring to an event that didn’t exactly get recorded in the Scripture, a cocktail mixed in my mind while I was pondering a related matter, the worms of which can I will not expose to air at this time.

First, let’s examine a few passages, conveniently located in the fifth chapters of a few books each:

Matthew 5:33-37 – “Again, you have heard that the ancients were told, ‘YOU SHALL NOT MAKE FALSE VOWS, BUT SHALL FULFILL YOUR VOWS TO THE LORD.’ “But I say to you, make no oath at all, either by heaven, for it is the throne of God, or by the earth, for it is the footstool of His feet, or by Jerusalem, for it is THE CITY OF THE GREAT KING. “Nor shall you make an oath by your head, for you cannot make one hair white or black. “But let your statement be, ‘Yes, yes’ or ‘No, no’; anything beyond these is of evil.

James 5:12 – But above all, my brethren, do not swear, either by heaven or by earth or with any other oath; but your yes is to be yes, and your no, no, so that you may not fall under judgment.

It would seem that the main reason why we should not swear or make vows is that it implies one’s regular word is insufficient on a given matter. So one calls something (or Someone) greater as a witness, as it were, to testify of the truth of what the maker of the vow is saying. (Or, if you’re Allah in the Qur’an, feel free to swear all the time by created things.) Which would mean that the listener, or vow-ee, might well have reason to distrust that which the vow-er says in most cases. Obviously, that’s not a good situation to be in. Our speech should always be truthful and reliable.

Proverbs 22:1 – A good name is to be more desired than great wealth; favor is better than silver and gold.

But, as Ecclesiastes said, it is better, if you made a vow, to go ahead and fulfill it (or seek release via mutual consent) rather than to let the thing slide when you come to the conviction later that you shouldn’t have made the vow. Probably the reader who is more astute than I (which is not a difficult task) can think of a few exceptions, but this would appear to be a general rule.

Why? Let’s examine the aforementioned obscure passage. First, the setup and the background.

3When the inhabitants of Gibeon heard what Joshua had done to Jericho and to Ai, 4they also acted craftily and set out as envoys, and took worn-out sacks on their donkeys, and wineskins worn-out and torn and mended, 5and worn-out and patched sandals on their feet, and worn-out clothes on themselves; and all the bread of their provision was dry and had become crumbled. 6They went to Joshua to the camp at Gilgal and said to him and to the men of Israel, “We have come from a far country; now therefore, make a covenant with us.” 7The men of Israel said to the Hivites, “Perhaps you are living within our land; how then shall we make a covenant with you?” 8But they said to Joshua, “We are your servants.” Then Joshua said to them, “Who are you and where do you come from?” 9They said to him, “Your servants have come from a very far country because of the fame of the LORD your God; for we have heard the report of Him and all that He did in Egypt, 10and all that He did to the two kings of the Amorites who were beyond the Jordan, to Sihon king of Heshbon and to Og king of Bashan who was at Ashtaroth. 11“So our elders and all the inhabitants of our country spoke to us, saying, ‘Take provisions in your hand for the journey, and go to meet them and say to them, “We are your servants; now then, make a covenant with us.”’ 12“This our bread was warm when we took it for our provisions out of our houses on the day that we left to come to you; but now behold, it is dry and has become crumbled. 13“These wineskins which we filled were new, and behold, they are torn; and these our clothes and our sandals are worn out because of the very long journey.” 14So the men of Israel took some of their provisions, and did not ask for the counsel of the LORD. 15Joshua made peace with them and made a covenant with them, to let them live; and the leaders of the congregation swore an oath to them.

As we can see, these Gibeonites were seized with a fear that did not lead to salvation or repentance. If they had been truly repentant over their idolatry and sin, would they not have fallen on their knees before God’s people and begged them not to destroy them, and pled to become worshipers of the one true living God? Would they have deceived the people of Yahweh?

Notice also the barb in verse 14. The embarrassing, and pointed, reminder that neither the people nor Joshua consulted Yahweh before swearing their oath. A modern analogy to this situation would be hastily making an oath before consulting the Word of God (after which examination, one would know not to make the oath, but I digress).

16It came about at the end of three days after they had made a covenant with them, that they heard that they were neighbors and that they were living within their land. 17Then the sons of Israel set out and came to their cities on the third day. Now their cities were Gibeon and Chephirah and Beeroth and Kiriath-jearim. 18The sons of Israel did not strike them because the leaders of the congregation had sworn to them by the LORD the God of Israel. And the whole congregation grumbled against the leaders. 19But all the leaders said to the whole congregation, “We have sworn to them by the LORD, the God of Israel, and now we cannot touch them. 20“This we will do to them, even let them live, so that wrath will not be upon us for the oath which we swore to them.” 21The leaders said to them, “Let them live.” So they became hewers of wood and drawers of water for the whole congregation, just as the leaders had spoken to them.

Joshua later pronounces a curse on the people, but you can almost hear the Gibeonites fake-quaking in their boots while wiping the sweat from their brows, breathing a sigh of relief, and smirking at the trick they pulled. Now they’re safe from the destruction that their Canaanite neighbors underwent, and found safety, at least for this life.

Obviously it was a mistake for the Israelites to swear the oath that guaranteed the Gibeonites their lives, as it directly disobeyed what Yahweh had told them to do. But for years I thought they’d made a second mistake, a sin of ommision, for not going ahead and obeying the first command and going back on the oath because it had been made under false pretenses. However, the obscure aftermath, a few hundred years later, seems to indicate that my original conclusion was mistaken:

1During the reign of David, there was a famine for three successive years; so David sought the face of the Lord. The Lord said, “It is on account of Saul and his blood-stained house; it is because he put the Gibeonites to death.”
2The king summoned the Gibeonites and spoke to them. (Now the Gibeonites were not a part of Israel but were survivors of the Amorites; the Israelites had sworn to spare them, but Saul in his zeal for Israel and Judah had tried to annihilate them.) 3David asked the Gibeonites, “What shall I do for you? How shall I make atonement so that you will bless the Lord’s inheritance?”
…
5They answered the king, “As for the man who destroyed us and plotted against us so that we have been decimated and have no place anywhere in Israel, 6let seven of his male descendants be given to us to be killed and their bodies exposed before the Lord at Gibeah of Saul—the Lord’s chosen one.” So the king said, “I will give them to you.”

I don’t think that the incident referred to in verse 1 is recorded directly, and obviously the Lord’s timing can appear strange to our eyes as this was well into David’s reign and Saul had been dead for decades, but His ways aren’t ours, as I’m continually reminded. The really important thing to see here is that the famine came from God. This disciplinary action was initiated by the Lord, and why? That oath that Joshua and the people swore, under false pretenses, had been violated by subsequent generations of Israelites, and now the Lord had decided to teach a lesson in response to its breaking.

The account is actually pretty disturbing, grieving to read, really. Yet at the end we see verse 14: “…after that God was moved by prayer for the land.”

The situation is pretty alien to anything we’re used to seeing. However, just as we can’t imagine the nastiness of temple or tabernacle worship (for example, notice how the priests are continually spraying blood all over the place and yet there are no provisions for cleaning the altar, and no flypaper back in the day. Use your imagination) and how it graphically portrayed the filth of sin, and just as we can’t imagine the sounds and sights, let alone the smells, of Calvary, in the same way we are insulated in our air conditioning and high-speed Internet from many of the gritty realities in which our forebears grew and died.

All that to say, for the love of God, just let your ‘yes’ be ‘yes’. Anything beyond that truly does come from the evil one, and his fingerprints are all over the alternative.