God’s called deserve the best preparation for ministry for God’s people that is available. – Jeff Crawford, President of Cross Church School of Ministry and Teaching Pastor

Through a series of “powerful messages,” God began to move in a “mighty way” in 2012 as Ronnie Floyd’s “vision” for the Cross Church School of Ministry came into fruition with Jeff Crawford accepting the call as the new institution’s first president (as the website explains). As Floyd’s School of Ministry says on its website, “… only God knows the heights to which we will be called to soar.”

For the low, low price of only twelve thousand dollars and a year of free labor, you can be given “practical ministry experience.” In other words, essentially, pay them to let you intern. In short, if you’re just starting out climbing that SBC career ladder, you can buy your way into an internship under mega-church pastor, Ronnie Floyd (and to be honest, it’s probably a steal for the connections you’ll make).

“The most important context for the training of ministers is in the local church, and I am so glad that Cross Church and Dr. Ronnie Floyd are establishing this new program for the training of ministers within the life and ministry of one of the world’s most dynamic and faithful churches. Southern Seminary is proud to be in partnership with this new program and we expect great things from those who will be trained by it and sent out into the world.”

Calling Floyd’s church among “the world’s most…faithful churches” is quite a compliment. Mohler was significantly topped by Akin, however, who says that Floyd’s vision is “utopian.” One wonders how many of these men have spent significant time in Floyd’s church or observing the “school” before making such glowing endorsements.

I would ask, given that this program is (A) designed to equip, train and disciple future leaders and (B) is so contingent upon the leadership of its president, Jeff Crawford, as the website implies, how well the program can do discipling young people for ministry when it doesn’t seem that Crawford’s efforts at training and discipleship have been successful in his own household.

The Pulpit and Pen has received quite a few bizarre, angry and downright antinomian comments from Cross Church members and attenders for re-posting a video that was already publicly displayed on the Cross Church Facebook page along with the sexually explicit and shockingly vulgar lyrics being danced to by Student Minister, Chad Reeves on their Springdale Campus. Few have been so appallingly unsanctified and hostile to concepts of Christian holiness as Crawford’s son, defending the song and actions in the video as not at all ungodly. 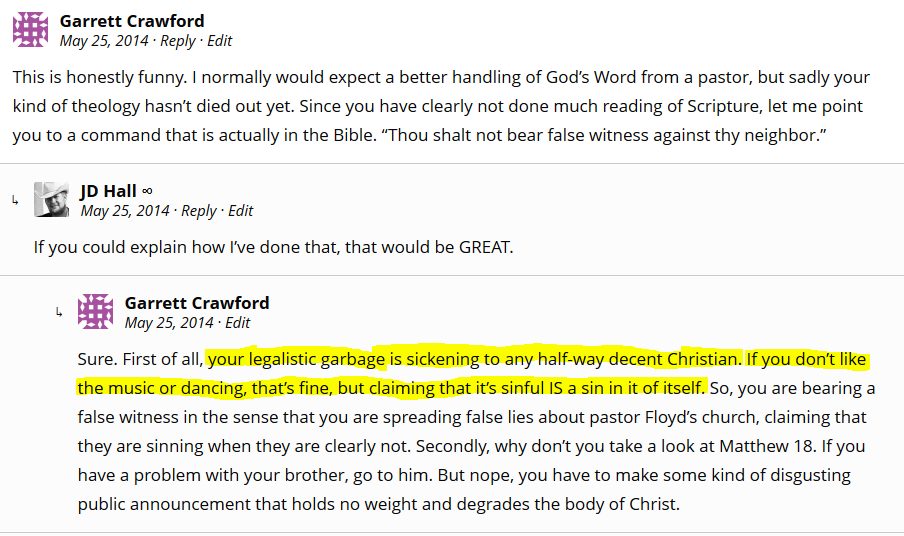 Notice, my criticism in the post was that a pastor on staff at Floyd’s Cross Church was dancing to lyrics so sexually explicit, vulgar and profane, most radio stations couldn’t play it over the public airwaves. I certainly could not get away with even reading the lyrics on my program according to the decency guidelines set by Worldview Weekend or SermonAudio. The lyrics are, without exaggeration, stomach-churningly ungodly. This criticism, according to Crawford’s own son is “legalistic garbage.” My criticism, as opposed to the lyrics themselves, is “sickening” to him. But get this…the young man says that “claiming that music was sinful is…sinful.”

Is this the type of discipleship and training in godliness we can expect to see from Jeff Crawford and Floyd’s School of Ministry? Does the Scripture not teach us that one’s household must be in order for them to be given stewardship over the household of God?

…for if someone does not know how to manage his own household, how will he care for God’s church? (1 Timothy 3:5 ESV)

The Bible has nothing to say about what kind of music we are to listen to? The Bible says nothing about these things? Jeff Crawford claims on the internship website that just a single year under his tutelage will change the trajectory of their ministry and prepare them for life. In eighteen years of mentoring his son, has Jeff Crawford never once brought up the issue of what kind of music or behavior is glorifying to God? If in eighteen years his very own son doesn’t understand the concepts of basic holiness in conduct, does he then do an adequate job in the year of mentoring he has in Floyd’s School of Ministry?

Crawford’s son says that the lyrics are sinful, but listening to the lyrics are not (neither, apparently, is a pastor dancing to these lyrics as a part of youth ministry). One has to wonder what he says about pornography, should his logic hold consistently.

Do you really trust Jeff Crawford to disciple your son or daughter?

At Cross Church we see one pastor dance to the shockingly vile lyrics as a part of a youth activity and then the video be deleted after I reported on it. We see a she-pastor dance in a way and wearing things that not too many years ago most would have considered to be unacceptable and immodest, and then her links and references to the video be deleted after I report on it. Then, we see the newly-adult son of the one entrusted with the stewardship of Floyd’s School of Ministry show a clear lack of discipleship or even the most elementary understanding of Christian holiness. Maybe Floyd’s leadership of his church isn’t what it’s made out to be by some of the SBC power-brokers.

Garret did ask one really, really good question, however…

The young man was responding to comments made in the thread about Ronnie’s leadership at Cross Church and his abandonment of almost any and all standards of godliness or holiness even among the staff, let alone the membership. His point was cutting – what about Mohler, who is nominating Floyd?

I think it’s a good question. Can Mohler really vouch for Cross Church as being among “the most faithful in the world”? Can he really vouch for the mentorship of Jeff Crawford in Floyd’s School of Ministry (has he been to Crawford’s own home to see the discipleship of his own children? Or has Mohler just slapped another good ole’ boy on the back and made a backroom deal?) – I don’t know. Honestly, I don’t want to know. The whole thing makes me sick.

We are heading down-hill, as Spurgeon said, at breakneck speed.

Why SBC's Mosque-Gate Has Nothing to Do with Religious Liberty