About a week ago we began a contest called The Dumbest Defense Award. Knowing that Patterson’s sycophants would soon come out of the woodwork to defend his Muslim enrollment at SWBTS, I predicted various defenses such as…

2. What’s wrong with teaching unbelievers how to do Christian ministry?

3. Who says seminary is for Christians only?

_
4. Patterson’s a hero of the Conservative Resurgence!

6. This is the progressive change we’ve been looking for!

7. At least the man wasn’t a Calvinist!

8. He might turn into the greatest missionary to Muslims in the history of the world!

9. At least Patterson found an authentic Muslim to invest in this time.

And so, we told the #pulpiteers that when they saw a dumb defense for Patterson to take a screen shot and post it in the thread in the Facebook “Pulpit Bunker” group or email to pulpitandpen@gmail.com and the winner will receive a free P&P mug or your choice from the P&P store.

We’ve receive a lot of entries, and they were hard to narrow down. But, here’s the top ten.

10. The “Seminary is a great place to mingle with lost people” defense.

09. The “It’s not like everybody at our seminaries are saved anyway” defense.

08. The “What’s the big deal; it’s not like this is the first time Patterson has done this” defense. 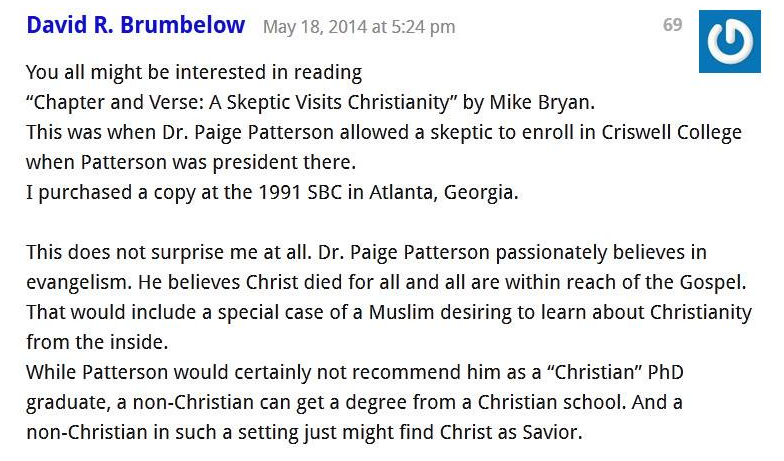 07. The “If you have a problem with this, you must not care about the man’s soul” defense. 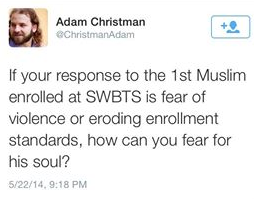 06. The “Patterson had to break policy because we have to be obedient to God rather than men” defense.

04.  The “As fellow Muslims, we think this is a great idea” defense.

02.  The “Seminary enrollment is an new evangelism strategy” defense.

AND THE NUMBER 1, “DUMBEST DEFENSE” GOES TO…

01.  The “Criticism of Patterson is only a satanic attack” defense.

I was going to announce the name of the #pulpiteer who brought the winning Dumbest Defense to my attention, but considering that #pulpiteers are in every nook and cranny of the cyber-world (including some pretty guarded places, like Timothy Roger’s social media accounts), let it suffice to say the anonymous fellow will receive a new Pulpit & Pen mug in the mail. Thanks to ALL the Pulpiteers who sent in entries.

Rogers will be sent a nice certificate in the mail, notated with this crowning achievement for display in his office (or other professional setting).

Beyond Johnny-Dome: Taking a Right Turn off of the Johnny Hunt Highway