First, thanks to Jason Smathers for providing the info so I can piggy-back off of his post at Witnesses Unto Me.

Secondly, let me point out my previous reporting that Johnny Hunt has claimed that Ergun Caner has demonstrated genuine repentance and should therefore be restored to ministry. With Hunt making this claim, others with the inability or unwillingness to think for themselves also make the claim.

And thus, the myth of Caner’s repentance grows like snowball heading towards hell…

Well, it seems that secular courts are willing to do something that the church is not willing to do (and it’s to our inexcusable shame). A court has today issued a public judgment in regards to Ergun Caner. Now only if God’s people could follow the example of the pagan justice system and decide a matter as right or wrong. If we are to judge angels one day (1 Corinthians 6), we’re in big trouble if we can’t even judge a devil like Ergun Caner. 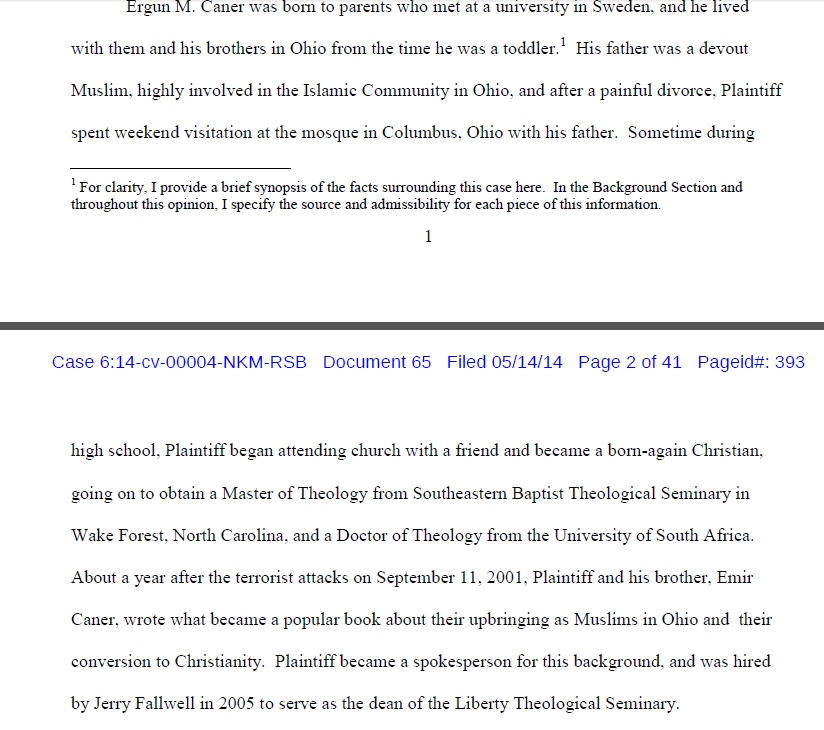 The judge substantiates Caner’s actual life story. Why? How is this relevant to the case? The judge has put into the public record Caner’s actual testimony because it’s pertinent to the information provided in the Marines lecture, and thus, the case at large. In other words, the judge is providing this information to substantiate that Caner lied throughout the video because it is pertinent to the judge’s findings. Although Caner would still have a groundless and frivolous lawsuit even if the video wasn’t chocked full of lies, the judge is about to demonstrate for the world Caner’s motivations for suppressing the video.

This is good. The judge demonstrates more integrity here than any Southern Baptist who’s name the average Southern Baptist would recognize. The judge speaks beyond the scope of the Marines video and points out that Caner’s lies were well beyond this one event and venue. It also puts into black and white legal record Caner’s lies – that he grew up in Turkey, steeped and trained in Jihad.

The judge then points out that Caner’s career is based on lies; listen to the phrasing here…

Notice, the judge is well aware that Caner has never lived in Turkey. Clearly, the judge indicates here that Caner’s rise in prominence was due to lies capitalizing on the tragedy of September 11. Also, please look at the judge’s notes under footnote 6, as he demonstrates for Southern Baptists that with just a little bit of effort it can be ascertained that Caner repeatedly lied about himself. The other footnotes herein are equally as enlightening (and as someone who wants someone to just speak some truth about Caner, a tad bit heartwarming).

Then, the judge has a sharp rebuke for the legal games Caner was trying to play (for some pretty nefarious reasons)…

Noooo. Say it ain’t’ so. Sarcasm aside, the judge then goes on to substantiate this sharp rebuke by pointing out the absurd argumentation of Caner and the claims directed toward Autry… 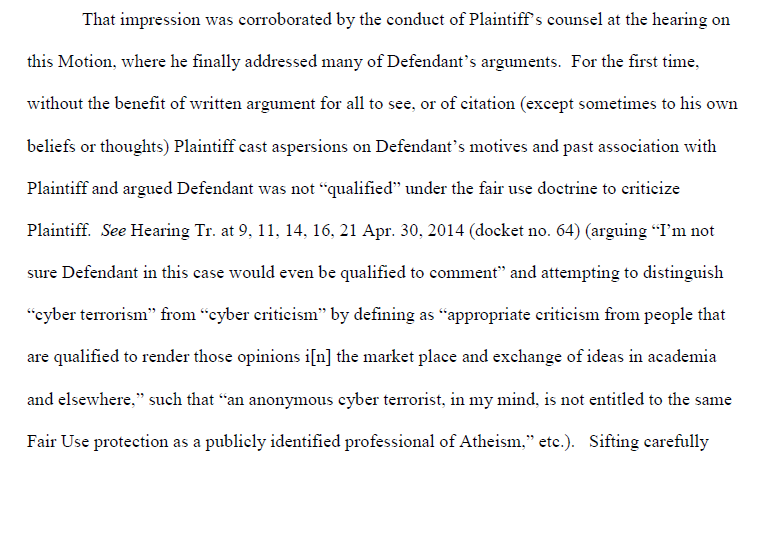 Caner argues that Autry is a “cyber terrorist” and then claims that even though criticizing public figures is allowable under Fair Use, that First Amendment protections don’t belong to Autry because he’s not “qualified” to criticize because he’s not in academia! By the way, Autry earned a Masters Degree from Liberty University under Caner’s headship, so…

While Johnny Hunt is declaring Caner’s “repentance” as being genuine and saying he’s now restored to ministry, and while his sycophants repeat Hunt’s declaration as authoritative fact, Caner is suing a Southern Baptist pastor and an entirely different Southern Baptist pastor’s son because when they exposed him it “impacted his ability to function and continue in his career.” Yep. Sounds like real repentance there, Johnny.

Look at how the judge responds to Caner…

He calls it “ludicrous.” He calls Caner’s claims that only those in an academic “oligarchy” bizarre. The judge then proceeds to write that Caner’s assertions amount to nothing but “outlandish arguments.”

The end of this long, sordid affair is that the judge wrote that even if Caner and his attorney were right about all their accusations toward Autry (which they didn’t even try to substantiate) his use of the videos would still be considered fair use and the judge writes “no reasonable jury” would find otherwise and then issued a Summary Judgment in favor of Jonathan Autry.

Oh, and then the judge left instructions with Autry on how he can file for financial restitution.

A Question for the Southern Baptist ‘Oligarchy’…

The judge in this case was flabbergasted that Caner asserted only a ruling class, academic “oligarchy” could criticize him. This is no surprise to those of us who know Caner and those who defend him. They will clearly tell you in no uncertain terms that he doesn’t “owe us” an explanation and that we’re not qualified to question him.

Where are those, according to Caner, who can question and criticize him? I think even the judge in this case is wondering where in the daylights you are. You see, Caner knows that the Good Old Boy SBC oligarchy won’t criticize him.

Please, for the love of Jesus and His church, prove him wrong.