I am aghast as to how it has become fashionable among so many evangelical leaders to minimize as a voting consideration what is certainly the most radical and fundamental restructuring of society in my lifetime, indeed arguably in the past millennium and beyond: namely, the elimination of both a male-female foundation for sexual ethics and a whole-body basis for determining sexual complementarity and gender.

I am fully aware that these radical changes were preceded by, and could not have happened apart from, a host of regrettable heterosexual compromises. Nevertheless, the full-court promotion of these new and dangerous ideologies marks a major turning point for the worse in the progress of society (which renders the designation “progressive” for the promotion of these agendas absurd).

The gnostic (body-denying) redefinition of marriage from its very foundation and gnostic denial of the integrity of the two complementary sexes (genders) established permanently in the womb pose the greatest threat to both morality and basic civil liberties that this country has ever seen.

Yet we have some conservatives (e.g., David French) attacking [Judge Roy] Moore for “an obsession” with same-sex marriage and transgenderism as a significant reason in why voters should deny him office. We have many other evangelicals (including Tim Keller, Russell Moore, editors at Christianity Today, others associated with the Gospel Coalition) contending that issues of immigration and aid to the poor are at least as urgent a consideration (if not more) than the “LGBT” agenda and abortion. We have evangelicals at the ERLC and TGC (also French) attacking Moore for not treating the blatantly anti-constitutional Obergefell decision imposed by five rogue justices of the Supreme Court as settled law (would they have done the same with the Dred Scott decision of 1857?); indeed, citing it again as a major reason for evangelicals (!) to reject his candidacy.

Why has this happened? Perhaps it is just coincidental that no greater public abuse falls on Christians than for strong political opposition to these tragic developments. Even in many conservative Republican venues and institutions it renders one persona non grata. You will get praised right and left for touting other social issues today as equally or more central (immigration, increased expenditures to the poor, and racial justice). That makes one “evangelical cool.” Even firm opposition to abortion doesn’t lead to the degree of public opprobrium that a stance against the LGBT agenda receives, not even close.

I can understand conservative Republicans who are only nominally evangelical taking such a political approach. I have a much harder time understanding it when it comes from genuine evangelicals.

The issues over which our society is at greatest risk are those which we now face a most critical period of losing for the foreseeable future.

Is immigration such an issue? Clearly not. We currently admit over a million *legal* immigrants each year. Nobody is contending that we should stop allowing immigrants into the country. The issue over how many to admit involves only a tiny fraction of the total. There is no “sea change” issue involved here. The debate here centers around *illegal* immigration; that is, whether we should enforce our own laws or reward those who violate said laws.

Is social welfare spending such an issue? Obviously not. The government now spends over a *trillion dollars* each year in various social welfare programs. Nobody is arguing to reduce that to more than (at most) a fraction of that monumental sum.

What of racial justice? Certainly this is a matter of importance. Yet no one is arguing for racial discrimination (not in the mainstream of either party at any rate) and there is no possibility of ever overturning any racial nondiscrimination laws.

These are not what I call “most endangered species” issues. They are alive and well and ever will be, certainly for the foreseeable future. Not even Trump has called for anything radically different on any of these concerns.

However, the matter is quite different with respect to “LGBT” issues and related religious liberty concerns. These are very much at risk of being lost for the foreseeable future. And we are on the cusp of changing the courts to overturn Roe v. Wade, perhaps our last best chance for doing so.

So, no, these matters are not all equal at the present time. By all means, let us be critical of Republican candidates who do not in their platform support our values. But let us not at the same time be blinded to how much is at risk of being destroyed with Democrats in office. The Obama administration had a cataclysmic effect on promoting the LGBT agenda, including two major Supreme Court appointments without which “gay marriage” would not have been unconstitutionally imposed on the nation.

As a reminder of what is at stake with a Democratic stranglehold of power (because every conservative non-vote for a Republican is, in effect, a half-vote for a Democratic candidate, by default), lest you think it is a relatively small matter, I cite some examples of religious-liberty concerns that come immediately to mind (with no attempt at being exhaustive): The Democratic Party wants to:

— fine and imprison people who don’t use the “correct” transgender pronoun and name
— require that deluded men be allowed into women’s restrooms (+ locker rooms, showers, and sports)
— stop teachers and students from using terms like “boys” and “girls” in the classroom because such terms may be offensive to “transgender” youth
— mandate that prepubescent children who think themselves “transgender” be given puberty blockers, irrespective of parental wishes (irreversibly changing their development)
— compel Christian business owners to provide direct goods and services (even speech) endorsing “gay weddings” or face fines and loss of our businesses
— terminate Christians from their jobs if they should question LGBT compulsory indoctrination in the workplace and even in many cases (particularly for some white collar positions) if they should question LGBT “rights” like “gay marriage” outside of the workplace (e.g., in Facebook postings or tweets)
— fire teachers at all levels who don’t promote LGBT ideology
— compel Christian schools to endorse homosexuality and transgenderism as a condition for receiving any aid and accreditation
— indoctrinate our children as young as 5 into thinking their parents are bigots if they don’t support the whole LGBT agenda
— prohibit adoption and foster care for any families that cannot affirm the LGBT agenda
— institute “affirmative action” policies for LGBTQ+ job applicants
— stack the courts for decades to come to promote this horrid agenda with judges who substitute their left-wing ideology for the Constitution (thereby bypassing the process for amending the Constitution and turning this nation into an oligarchy)

I rank abortion as the next most important concern. Here Democrats seek to compel us to fund abortion and abortifacients (not to mention supply contraceptives to young teens), as well as to uphold the unconstitutional Roe v Wade through left-wing court appointments. Further down the road we can expect laws that make the questioning of the “right to choose” hate speech (as is already the case in France). We now have our best chance ever at changing the shape of SCOTUS for decades to come.

Evangelicals, wake up. The window of opportunity for rescuing our country against a great tragedy is rapidly closing. Stop being duped by Democratic propaganda into thinking that helping Democrats to get elected will “save evangelicalism.” It will do the opposite.

[Editor’s Note: This was a post from Dr. Robert Gagnon on his Facebook page, re-posted by permission. There is little to no doubt, in our opinion, that the battle for God-defined sexuality has been surrendered and supplanted with social justice issues like immigration] 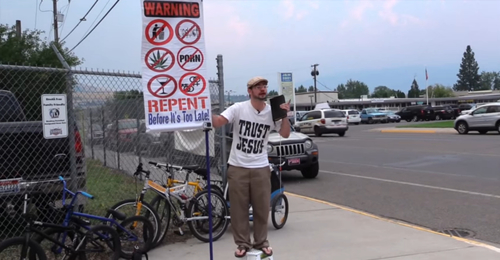 Podcast: Pay Me for Mentoring