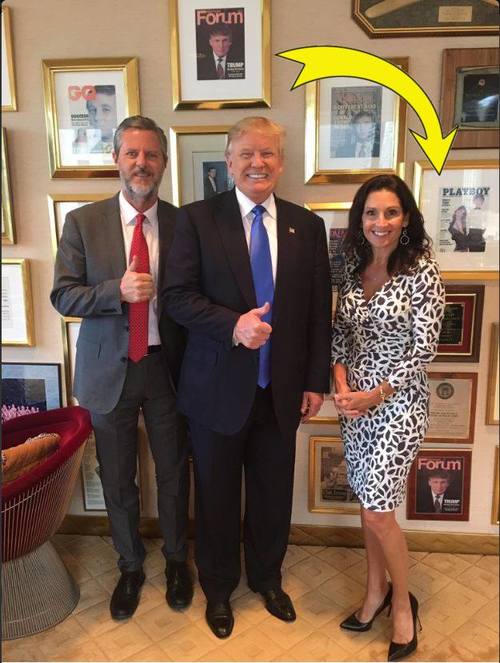 Jerry Falwell, president of the flagship Southern Baptist university, Liberty University, and one of Donald Trump’s loudest evangelical supporters, is now seeking repayment for all of his efforts in helping Trump land the job of the nation’s leader. The Richmond Times-Dispatch reports that Falwell has expressed interest in serving a prominent role in the Education Department under Trump. In an interview last Tuesday, Falwell said,

I let them know one of my passions is reforming higher education and education in general, I told them I’d be willing — I have a lot of responsibilities here — but I’d be willing to serve in some capacity that sort of brings education back to some form of sanity.

Jerry Falwell spent the better part of the last year preceding the election campaigning on Donald Trump’s behalf. In opposition to many other evangelical leaders, like Russell Moore who spent his time campaigning against Trump, Falwell endorsed Trump, stating he was “a successful executive and entrepreneur, a wonderful father and a man who I believe can lead our country to greatness again.” Falwell even went as far as to declare Donald Trump a born-again Christian.

It is truly an honor to receive Jerry’s endorsement. Not only is he a high-quality person, with a wonderful family, whom I have great respect for — I also consider him a very good friend and his support means so much to me,

Trump said in a statement to the Washington Post.

Falwell, now, is holding Donald Trump to the line, when he along with several other evangelical leaders agreed to Work for Trump if he became president in a closed meeting back in June. Charisma News reports James Dobson as saying,

There are about 25 of us that include Jerry Falwell, Jr., Robert Jeffress, Jack Graham, Ben Carson, James Robison, Michele Bachmann, and many others whom you would probably know. We’ve all agreed to serve. How will that play out if Trump becomes president? I don’t know. It is a good start, I would think.

The Richmond Times-Dispatch also reports that Falwell wants to repeal the Johnson Amendment that prohibits tax-exempt organizations like churches from endorsing political candidates, and he supports a “voucher” system that enables poor and underprivileged children to attend private schools at reduced rates or no cost at all.

In a lashing-out against those who disagree with him, he says,

The vast majority voted for Trump because they wanted change. They’ve been betrayed by career politicians, by establishment Republicans so many times — they just don’t trust them anymore — and they just wanted something different and didn’t want to go with Clinton. I knew on the other side you had the Pharisees, you know, the real judgmental Christians who were never going to support him, but I really felt like they were outnumbered.

Of course, the “Pharisees” and “judgmental Christians” Falwell is referring to is Russell Moore and his followers who viciously campaigned against Donald Trump on the basis of character flaws and his closed-border policies, incorrectly stating “that Ted Cruz is leading in the ‘Jerry Falwell’ wing, Marco Rubio is leading the ‘Billy Graham’ wing and Trump is leading the ‘Jimmy Swaggart’ wing…” Turns out, Trump was leading the “Falwell wing” after all. In response to Moore’s unceasing vitriol against him, Trump tweeted that “Russell Moore is truly a terrible representative of Evangelicals and all of the good they stand for. A nasty guy with no heart!”

So Jerry Falwell Jr.’s guy is in, and now it’s payday.

Bethel Rebukes ‘Christian Tarot’ Card Readers, Deletes Rebuke, Then Sticks Up for It

Young Man Tweets, ‘God Brought Me Out Homosexuality, His Word and Spirit Renew My Mind’

The email service might have bitten off more than they can chew by censoring the Montana-based group, which is now