Whoever takes a human life shall surely be put to death. – Leviticus 24:17

Imago Dei, or the image of God, is a biblical term applied uniquely to humans over all other creatures. No other creature can claim this honorable title. The Scriptures teach us that God’s image, tainted as it may be by our sin, is inherent in all of us, beginning at the moment of conception. To destroy a human life is a direct assault on God’s image. This is no wonder why he abominates murder and demands punishment for this grave sin.

Yet there are those who proclaim the name of Christ and give lip-service to “pro-life” causes, but when it comes down to it, ultimately stand on the side of murder–because it’s more convenient.

Recently it has been reported that a Southern Baptist deacon in Oklahoma is helping to construct an abortion clinic. His company, Yarbrough & Sons, is supposedly 80 percent complete with their job, and only then were they informed that they were unknowingly helping to build a murder mill. Upon the revelation of his actions, while proclaiming that he stands for the sanctity of life, he decided it was more convenient to finish the job, rather than lose money that he had invested thus far.

“In you they have taken bribes to shed blood; you have taken interest and profits, and you have injured your neighbors for gain by oppression, and you have forgotten Me,” declares the Lord GOD. —Ezekiel 22:12

You see, his worldview is no different than those of in the pro-choice camp (yes, pro-murder). People who are pro-choice, and people who claim to be pro-life, have something uniquely in common. The mantra of the pro-choice camp is that abortion should be “safe, legal, and rare,” and that what a woman chooses to do with “her body” is “her business.”

Here, [Southern Baptist Pastor, name redacted] who claims he is pro-life. Yet, in defense of the Southern Baptist deacon’s participation in the construction of a murder mill, [the pastor’s] response to those who are outraged by this and called him and his church to repent was,

Why is it right to contact? Where does Scripture call us to be busybodies like that? What standing do we have?

The pastor believes that we, as Christians, have no standing to contact him and his church elders and call them to repentance. The matter of fact is, much like the pro-choice camp, [the pastor] believes that what they do is “their business.” While [the pastor] finds it abhorrent to organize an effort to call murderers to repentance because it is an abomination to God, our creator, interestingly enough he sees it right to organize an effort to call out others when they call him out on it. The pastor writes…

Therefore, I’m calling upon all JD Hall’s elders, followers, supporters, and enablers to confront him about his destructive behavior, and call upon him to repent and issue an apology to both me and my church.

This is the ultimate sham of the pro-life movement and the ultimate shame of the Church. These are the people that believe they are “pro-life” because they march once a year with Roman Catholics and other apostates proclaiming that abortion is wrong because our tax dollars pay for it, or because Planned Parenthood sells body parts, or because the infants can feel pain after a certain amount of time. This is nothing more than pro-choice rhetoric that finds it less convenient to murder children at certain times for certain reasons.

It’s inconvenient to “open your mouth for the mute, for the rights of all who are destitute (Proverbs 31:8).”

God’s command is “You shall not murder.” Period. (Exodus 20:13) Taking the life of an innocent, unborn child, or otherwise participating and facilitating the ability to do so is grave sin, and the only solution to sin is the Gospel. While Yarbrough & Sons are aiding and abetting the assassination of countless children, his pastor’s only concern is the “assassination” of his deacon’s “character.” A Gospel we have a Scriptural mandate to proclaim (Matthew 28:19-20). A mandate the pro-life movement stands in the way of, and resists. 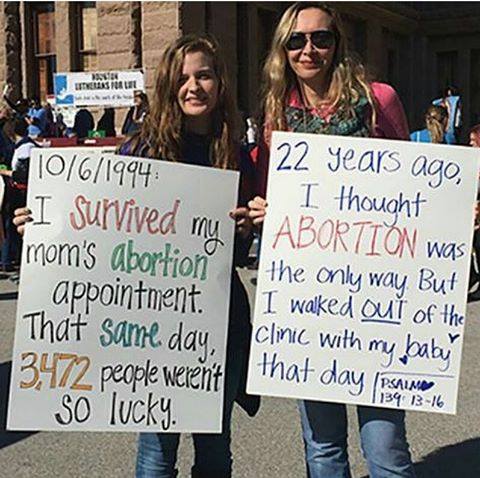 It’s easy to think that you’ve done something so terrible that God would never forgive you. After all, abortion is murder, and what sins are graver than murder. Does God forgive murderers?

Good news. Yes, he does!

If we confess our sins, he is faithful and just to forgive us our sins and to cleanse us from all unrighteousness. – 1 John 1:9

You see, the good news is that while we were still sinners, Christ died for us (Romans 5:8). There is nothing so grave that we can do as sinners, that we can’t repent and turn to Jesus Christ for his love, mercy and grace.

There is therefore now no condemnation for those who are in Christ Jesus. – Romans 8:1

God didn’t send his son to die on the cross to save righteous people. He came to save sinners (Mark 2:17). And yet, the Bible says there is nobody righteous–not even one (Romans 3:10). There is nothing you can do to earn a righteous place with God, but at the same time, there is nothing you can do to out-sin God’s grace and mercy. Without Christ, your “good works” are like filthy rags (Isaiah 64:6). Yet his death, burial, and resurrection is completely sufficient to cover all of your sins, including abortion.

As far as the east is from the west, so far hath he removed our transgressions from us. -Psalm 103:12

And he will never stay angry with you if you repent and believe in Jesus Christ for your forgiveness.

Who is a God like You, pardoning iniquity. And passing over the transgression of the remnant of His heritage? He does not retain His anger forever, because He delights in mercy. – Micah 7:18

If you want to receive God’s mercy, repent of your sin, and trust Jesus.

Sign the petition here for the ERLC to make a statement on Southern Baptists building abortion mills.

Educate Your Kids At Home with This Awesome ‘Christendom’ Homeschool Curriculum