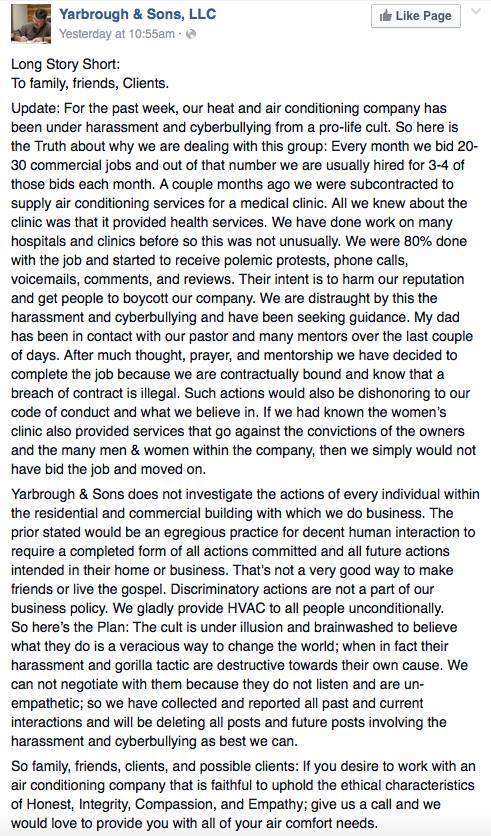 If helping to build an abortuary doesn’t qualify as a disciplinary offense in the Southern Baptist Convention, suffice it to say that nothing does. Pulpit & Pen brought you the news story of a new child sacrifice center being renovated in Oklahoma, and the various construction outfits providing the services necessary for it to become a baby-killing facility (source link). We then brought to you information regarding one of those service companies professing to be “Christians,” and in fact, its owner being a deacon of a Southern Baptist Church (source link). Then, I talked about this on the Pulpit & Pen Program and explained how when I called the church to discuss this with the pastor, the receptionist, Angela, rudely hung up on me – a fellow Southern Baptist pastor who was simply concerned that their deacon was facilitating the murder of children (source link).
Yarbrough Sr, the owner and operator of the heating and cooling unit providing service for the child sacrifice center, has responded in social media and his pastor-approved response needs vetting. He writes, as you can see above…

Update: For the past week, our heat and air conditioning company has been under harassment and cyberbullying from a pro-life cult.

The context of what Yarbrough calls “harassment” and “cyberbullying” is clear. Chiefly, concerned Christians have emailed and called his place of business, as well as the church from whom he received counsel to continue aiding the child murderers. Phone calls have gone out from sweet little old (no offense) “church ladies” in churches from similar denominations, Southern Baptist pastors like myself, fellow deacons in like-minded churches, a number of home school teenagers (and boy, do they have a reputation as being rowdy!) and at least one former director for the Montana Family Coalition and other pro-life organizations. These are the people who Yarbrough has characterized as a “cult.” The irony here cannot be overstated. Because of Yarbrough’s work, children will be ruthlessly slaughtered in the comfort of air conditioning while he is worried about “cyber bullying.” Empathy apparently is something in which Yarbrough is not trained, as the work of his hands is facilitating what in God’s eyes is clearly homicide. He’s facilitating murder, and he’s worried about “harassment,” IE people calling him to plead he not continue to sully his hands with innocent blood.

So here is the Truth about why we are dealing with this group: Every month we bid 20-30 commercial jobs and out of that number we are usually hired for 3-4 of those bids each month. A couple months ago we were subcontracted to supply air conditioning services for a medical clinic. All we knew about the clinic was that it provided health services. We have done work on many hospitals and clinics before so this was not unusually. We were 80% done with the job and started to receive polemic protests, phone calls, voicemails, comments, and reviews. Their intent is to harm our reputation and get people to boycott our company.

While Yarbrough is defaming the name of Jesus, having the grave audacity to call himself a Christian after the name of our Savior, and by defaming his own church (First Baptist Church of Blanchard) by having it associated with such ungodly and overt godless paganism in its pews, he is concerned with those trying to “harm [their] reputation.” If harming their reputation means telling people that they’re facilitating the murder of children in air conditioned comfort, then so be it. Sadly, the one really defaming their character is Yarbrough and Sons, who are assisting murderers in their infanticide. That’s what’s truly defaming – Yarbrough’s behavior.

We are distraught by this the harassment and cyberbullying and have been seeking guidance. My dad has been in contact with our pastor and many mentors over the last couple of days. After much thought, prayer, and mentorship we have decided to complete the job because we are contractually bound and know that a breach of contract is illegal.

First of all, breach of contract is not “illegal.” That’s preposterous. It’s a violation of a civil contract, in which there are civil penalties. It is not criminal to violate a contract. Chiefly, Yarbrough entered into a contract to provide services to a facility to murder children. Rather than being bound to a civil contract upon which there may be financial penalties, Yarbrough’s heart should be bound by conscience and the Word of God. No doubt, Yarbrough would have civil consequences due to not completing his abetting of their murders, but the consequence for him completing that work will be worse than a millstone put around his neck.

Such actions would also be dishonoring to our code of conduct and what we believe in. If we had known the women’s clinic also provided services that go against the convictions of the owners and the many men & women within the company, then we simply would not have bid the job and moved on.

This is our chief complaint. Yarbrough’s “code of conduct” involves not engaging in what they call elsewhere “regressive business practices” (IE losing money), but their code of conduct apparently does not include not helping infants have their brains sucked out of their mother’s womb. This is precisely why Yarbrough should be called to repentance by his church, and should he continue in his work, be forbidden from the Lord’s Table lest he drink damnation upon himself and be treated like a gentile and tax collector.

Yarbrough & Sons does not investigate the actions of every individual within the residential and commercial building with which we do business. The prior stated would be an egregious practice for decent human interaction to require a completed form of all actions committed and all future actions intended in their home or business. That’s not a very good way to make friends or live the gospel. Discriminatory actions are not a part of our business policy. We gladly provide HVAC to all people unconditionally.

So here’s the Plan: The cult is under illusion and brainwashed to believe what they do is a veracious way to change the world; when in fact their harassment and gorilla tactic are destructive towards their own cause. We can not negotiate with them because they do not listen and are un-empathetic; so we have collected and reported all past and current interactions and will be deleting all posts and future posts involving the harassment and cyberbullying as best we can.

Yarbrough’s chief complaint is that we have exposed their wicked deeds. To Yarbrough, this is cult-like, guerrilla-tactics, and harassment. What we have done is exposed Yarbrough’s wickedness and his financial partnership with murderers, gladly and greedily accepting literal blood money as a part of his “business ethics.” If their reputation suffers as a part of our polemics work, it is only due to their unrepentant and willful role in infant homicide.
While Yarbrough seems to thinking that “reporting” all their “harassment” (to who, the First Amendment police?) and ignoring of future requests of inquiry regarding their abetting of murder (just as they’ve been ignoring the inquiries thus far) may ease their burden or make the issue go away, I assure you…it will not. We will continue to warn the Christian public not to do business with those who don’t discriminate against murderers. I have already contacted local radio stations to put Pulpit & Pen on the radio locally, and we will place ads in the newspaper warning Christians in their community of both their church and their services. Consumers might want to discriminate against those who blaspheme Jesus by calling their businesses “Christian” while helping abortion clinics get up and running. We’ll give them the option to find heating and air businesses with more integrity.

So family, friends, clients, and possible clients: If you desire to work with an air conditioning company that is faithful to uphold the ethical characteristics of Honest, Integrity, Compassion, and Empathy; give us a call and we would love to provide you with all of your air comfort needs.

Somehow, I don’t think “honesty, integrity, compassion and empathy” means what Yarbrough and Sons think it means.
May Yarbrough and Sons repent of taking part in such wickedness, and might they find full reprieve and forgiveness under the shed blood of Christ. May they display penitent faith in Jesus Christ and repent of their actions. If they do, the church should fully embrace and restore them. And if not, may the blood of murdered infants rest upon them for eternity, and might they abide under the wrath of God.

Continuationism is NOT a Secondary Issue

I Hate It When God “Shows Up”

Witchcraft Moves to the Mainstream in America as Christianity Declines