“Do not be unequally yoked with unbelievers. For what partnership has righteousness with lawlessness? Or what fellowship has light with darkness?” (2 Corinthians 6:14, ESV)

ERLC Research Fellow and Liberty University professor Karen Swallow-Prior has repeatedly shown a disregard for biblical holiness in her associations. Whether it is attending a “gay Christian” film festival, partnering with unbelievers to advise animal rights groups, or joining with feminists that bash complementarianism, Dr. Prior keeps very strange bedfellows.  Prior has also demonstrated an undiscerning lack of good judgement, contributing to Sojourners (a publication which features the likes of Shane Claiborne and Christian Piatt), and written the praises of a Rob Bell, Pat Robertson, and Rachel Held-Evans (a motley crew, indeed). Thus, it comes as no surprise to see that, on Twitter, she has promoted not one, but two homosexual activists who participate in the #BlackLivesMatter movement: Broderick Greer and DeRay McKesson

Greer is a gay activist who has written about being a Homosexual here. Greer took to social media to deride white members of the Pro-Life Movement by calling them, “insensitive pricks” who are “nothing but anti-black in their patronizing rhetoric around the number of  black pregnancies ended compared to black lives lost to police brutality” (Sources here and here). Prior engaged with Greer and ended her interaction with him on this note: 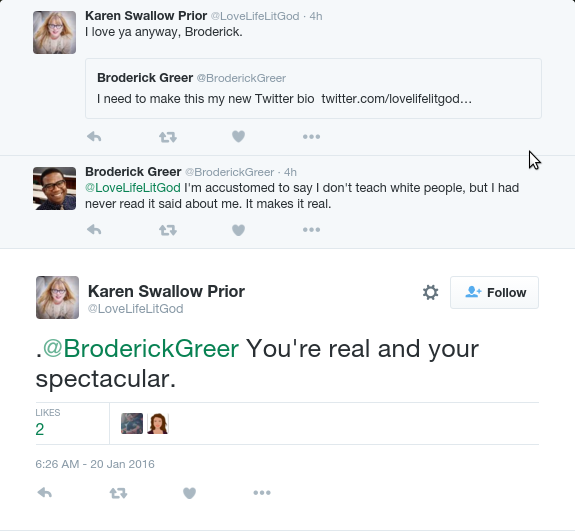 For Prior to tell Greer that she “loved him anyway” is quite graceful.  However, for Prior to say that Greer was “real and spectacular,” especially after he had just defended abortion, is unconscionable.  (Those who are familiar with both Prior’s penchant for pop culture and the 90s sitcom Seinfeld will recognize Prior’s “real and spectacular” word choice as a reference to Terri Hatcher’s breasts.  Of course “real” might have an entirety different meaning in the #blacklivesmatter vernacular).

Prior’s assessment of Greer is arguably not her most egregious interaction of the week, however.  Consider her tweet advertising DeRay McKesson, who has referred to himself as “a proud black gay man,” (Source). McKesson has spoken for Gay Activism group, GLAAD. He has also written for the liberal-leaning Huffington post and, despite claiming to combat racism, has made racist remarks about Caucasians.

To say the least, McKesson makes some erroneous claims in the clip shared by Prior.  For example, he cites Stephen Colbert’s wealth as an example of “White Privilege.” No mention is given of the privilege of Creflo Dollar, Spike Lee, or Al Sharpton.

Now is as good as a time as any for one to mediate on the following scriptures and consider just how social media interactions reflect on the body of Christ.

“If anyone comes to you and does not bring this teaching, do not receive him into your house or give him any greeting, for whoever greets him takes part in his wicked works.” (2 John 2:10-11, ESV)

“Let no one deceive you with empty words, for because of such things God’s wrath comes on those who are disobedient. Therefore do not be partners with them. For you were once darkness, but now you are light in the Lord. Live as children of light (for the fruit of the light consists in all goodness, righteousness and truth) and find out what pleases the Lord. Have nothing to do with the fruitless deeds of darkness, but rather expose them. It is shameful even to mention what the disobedient do in secret. But everything exposed by the light becomes visible—and everything that is illuminated becomes a light.” (Ephesians 5:6-13, ESV)

It is also a good time for one to consider his opinion of the ERLC (which run by a man who is, essentially, a blue dog democrat) and Liberty University (especially in light of its recent invitation of Donald Trump to speak at convocation).