The Gestapo furnace escorts had families, too…and I’m sure their families were proud of the men (and women) they became. I can hear it now: “Just got mixed up with the wrong crowd. It was all their superiors’ faults that they ended up, you know, facilitating the murder of thousands of Jews. Little Heinrich was such a good boy. Everyone loved him. And besides, you know, those Jews, I mean, of course they didn’t all deserve to die, but they sorta had it coming anyway…”

We at Pulpit & Pen brought you the continuing story last week of police officers in Norman, OK working as deathscorts at the child sacrifice center run by Baby-Murderer-In-Chief Larry Burns, not only taking blood money to help secure the premises from violent incursion, but indeed offering moral aid and comfort to the murderous parents, boyfriends and husbands, and grandparents that partronise this altar to Molech, and doing so in official police regalia and using official police cruisers.

The plot thickened when the Abolitionist Society of Norman coordinated exposure efforts with Pulpit & Pen to call attention to the police support of this ongoing atrocity, specifically Lt. Jeff Robertson of Norman PD. One Cynde Robertson, a resident of Noble, OK, just to the south of Norman, happened across the post and jumped in of her own free volition to defend her deathscort rent-a-cop brother Jeff Robertson.

I wish I were in a position to say that the churchianity lingo that flowed forth so liberally from her keyboard is unusual, almost unique. Sadly, it is all too common, whether online or in an evangelistic/apologetic/polemic context on the street or at the abortion mill. Churchgoing people say these things all the time. Just expect it.

So, what do we have here?
-The deathscort rent-a-cop is a Christian and serves an Awesome God
-We will all be judged
-It is slander and hatred to reveal the truth about what this officer does while off-duty and wearing badge, uniform, equipment, and full paraphernalia and driving a marked police cruiser
-Nobody will be judged for killing babies
-If we were really repentant of our sins, we would not judge others
-God is the only judge that matters

This guy gets it. But alas, the level of biblical literacy required even to make a snappy and accurate meme is lacking in the vast majority of American churchianity settings, whether a pew-sitter or an employee of the church.

Cynde was not content to let it rest there. No, this was no drive-by discomfiture, no mock walk. 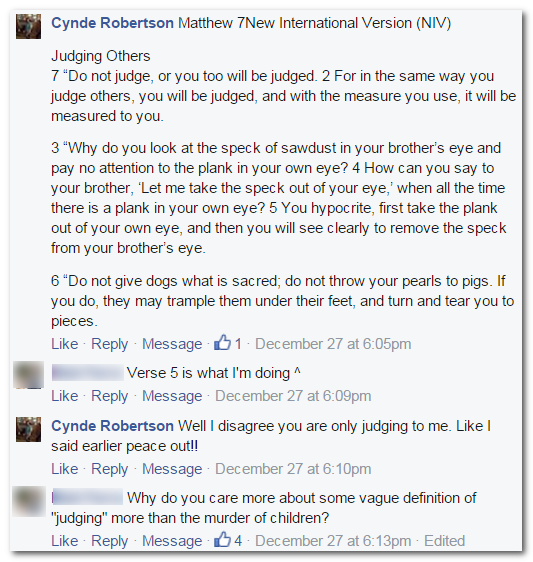 Of course, what we encounter with a biblical neophyte wouldn’t be complete without a citation of Matthew 7 (though to her credit and surprisingly enough, she didn’t end the citation with verse 2), some statements judging us for judging others because she judged that judging others is bad so we are placed under her judgment for placing someone under our judgment, a gripe that nobody’s perfect so we shouldn’t care about holiness or obedience, a reminder that God is bigger than things that are smaller than God, and an admonition not to stone anyone to death unless we ourselves have achieved sinless perfection. I suppose we can all stand amazed that the word “Pharisee” never appeared in that thread and that “pharisaical” showed its pretty little face only once. So, you see, the real bad guys here are those abolitionists who give up much to stand in freezing temperatures for hours so as to try to turn people back from the slaughter, proclaim the law of God and the good news of Jesus Christ, and rescue those being taken away to death. The baby killer himself, his staff, the murderous parents, the pressuring boyfriends and grandparents, the complicit friends, the rent-a-cops paid in blood money? They’re all good people. You don’t know their story. You don’t know where they’ve been. Who are you to judge them?

Take a time machine back 70 years and make the same defense of a Gestapo guard who killed Jews. Hey, it’s not like Jews were human beings. Why are you so mean and judgmental? He was just following orders. He didn’t actually gas Jews himself. All of the same arguments work perfectly. That should bother you.

Pulpit & Pen has been given information that indicates that Cynde Robertson and her brother Jeff Robertson, spiritual descendant of the Gestapo furnace escorts, attend religious services performed by JourneyChurch.tv, and Cynde let us know in the thread she attends those services every Sunday as does Jeff. Cynde was also kind enough to reveal to the world that she is a Level / Thrive brand promoter, so if anyone would like to do business with someone who defends modern-day Gestapo because don’t judge other people, feel free to give her a call.

One might also ask Pastor Clark Mitchell of Journeychurch.tv what he thinks about these sorts of people taking up seats at his light-and-fog worship experience weekend rigmaroles. Does he care? Does he even know who they are? (We all know the answer to those questions. They’re just rhetorical.)

At some point, you sort of run out of words to say. Maranatha.

My Trip to LifeWay as a Member of #the15