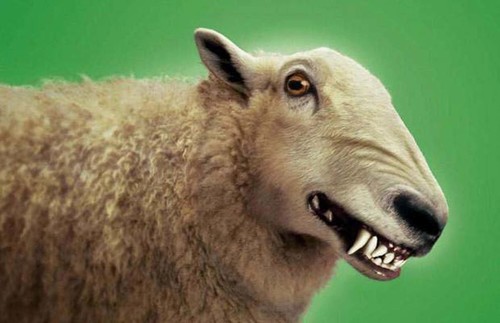 “Behold, I am sending you out as sheep in the midst of wolves, so be wise as serpents and innocent as doves.” – Matthew 10:16

As Christians, we hear echo back to us strongly the words of our Savior in John 13:35, “By this all people will know that you are my disciples, if you have love for one another.”

Unfortunately, this litmus test of love for the Saints is taken advantage of by wolves who put on the badge, “Christian.” To many in evangelicalism, a profession of Christ and declaration of good intentions works like kryptonite on Superman. If the person claims Christ, we argue, and if they mean well, we suppose, their problem is not one of sinisterness, but stupidity. Even among the discernment community, we tend to think of people like Furtick, Noble, Warren, Houston, Osteen, and Stanely as dim bulbs. We think they’re stupid. And given the signs, that says more about our intelligence than theirs.

Believing first in people’s stupidity (or ignorance, or naivety, or dimness) is the natural prejudice of the human mind. We would rather think of confessedly well-intentioned people as stupid than sinister – especially when they smile, say the right words, and profess the right intentions.

How do you know if someone is stupid or sinister? Well to be clear, you can never know for sure unless God shares with you his omniscience (that probably won’t happen any time soon). If a wolf were bounding across the prairie in the skin and scalp he just ripped from a sheep, you wouldn’t know until you got close enough that you could see the crimson blood drip from his teeth – and by then, it might be too late. That’s why wolves wear sheep’s clothing. Sheep are herd animals. We are eager to accept into the flock, and slow to kick them out.

There are some discernment tips, however, that can shed some wisdom on deciding whether or not we treat someone as a schismatic or as a well-intentioned sibling in Christ who maybe needs some Bible training.

1. Do they have more letters after their name than you have in your name? Here’s a tip – if their name is followed with letters signifying all of their academic achievement, maybe we shouldn’t be so quick to think they’re stupid. I’ve seen Christians with a modicum of discernment call Rick Warren stupid. Really? Do you think a guy with a BA from California Baptist University, a Masters Degree from Southwestern and a Doctorate from Fuller Theological Seminary is “stupid”? I’m not vouching for the soundness of these institutions, but dummies typically don’t have doctorate degrees unless they came from a cracker-jack diploma mill.

2. Is what they write characterized by illiteracy, stupidity, inanity, or embarrassing intellectual shortcomings? If their writing is characterized as “brilliant” or “insightful” or “masterful,” – and particularly if they’ve written for national publications or wound up on the best-sellers list without buying their way on, maybe they’re not only smart…maybe they’re smarter than you.

3. Do they come from a solid “faith-tradition”? If someone is saved out of ungodliness today, they may have some terrible presuppositions guiding their judgment well after they’ve found themselves in positions of prominence within the church. These first-generation Christians – even after maturing and being discipled – sometimes have to engage in constant gut-checks to make sure they’re not “off track” on issues that are rarely issues among those who were discipled from an early age. If your dad is Charles Stanley, forgive my incredulity in thinking you don’t know a thing or two about the Bible or the church.

4. Has nobody really cautioned or admonished them before? We want to snuggle in among these razor-toothed ewes and lead them away from their error. If only someone would caution them, we think, their good intentions would override their bad theology and they’d doggy-paddle away from troubled waters. You don’t think anybody has happened to mention to Steven Furtick, “Uh…you’re being kind of creepy. The coloring book thing was really, um…weird.” You don’t think that people surrounding Mark Driscoll never admonished him? With Karen Swallow Prior, I think it’s conceivable that this has never happened before, if Liberty University is a self-absorbed island of Downgrade that’s insulated from anything sound (if Liberty provost’s attempted partnership with Benny Hinn could go unnoticed, KSP could go unnoticed pretty easily). Her time at the liberal CBF church wouldn’t have corrected her on any of this (from her Christian feminism to gross misunderstanding of how Jesus behaved towards sinners). Her resume’ spells out clearly that she’s not stupid, but maybe she’s not been exposed to rightful criticism yet. We’ll know if she’s sinister in due time, but for now we know that whatever she is, it’s not stupid.

5. Do they have a clear trajectory? Occasionally, sound people make bad decisions. Sometimes, sound people make occasional stupid decisions. That happens. But if it happens repeatedly and over and over and over again…take a hint. This isn’t an exception of some kind to an otherwise solid trajectory, it is their rule. It’s not just a bad choice of theirs at this point, but it’s who they are. You could convince me that Rick Warren wasn’t a theological chameleon, for example, if each and every single time he speaks to a cult or false religion he doesn’t change who he is to accommodate. Back when people first started accusing him of Chrislam, people stepped in to defend him saying, “He’s just inarticulate.” Well, he’s either the most inarticulate person on the planet (because this is a recurring trend) or he’s doctrinal jello. Let me ask you. Do you think a guy who’s famous for his writing and speaking skills is that inarticulate? Repeatedly? Wise up.

6. When goats and sheep are in a tussle, whose side do they instinctually take? When Christians and the world are at odds with one another, whose side to they take? Who do they swoop in to defend? After the battle is over, whose wounds are they bandaging up? This might be the most frightening issue with Karen Prior, because I’ve never seen her take the Christian’s side in any engagement, is quick to defend the evidently lost, quick to tell the Christian to stand down, quick to apologize for the Christian’s behavior, and quick to bind up the wounds of the lost rather than the believer. Kinda makes you wonder what side she’s really on.

7. Who are their biggest fans? Who are those defending them most strongly? Are those who attack the rest of us defending them? Are people who wouldn’t know conservative Christian values if it bit them on the posterior jumping in to defend them each time their sheep’s clothing has a noticeable blemish? Are the enemies of the church quick to persuade us that they’re really a sheep? If you’ve ever tangled with Rachel Held Evans, for example, you know that her most sycophantic fans are masculine women, effeminate men, and people that hate God. Why do you think that is? Why would lost people be quick to vouch for someone’s Christian credentials? Think about it, and let it inform your judgment.

Think about these things next time you’re tempted to call that evangelical “stupid.” Are they really?

If evangelicalism was one big soccer game, the first time someone on our team scored a point in the wrong goal, we’d call them incompetent. The second time, maybe stupid. But if they kept scoring points for the wrong team, we would have it figured out. That individual is on the wrong team, has on the wrong jersey, and it’s probably not an accident.

Think about it. Be discerning.

Taking the Southern Baptist Convention to the Woodshed Less about Moore: A Minimal Facts Case for Breaking Free of Beth Moore