“I wish we had 1,000 more Karen Swallow Priors in evangelicalism today. She models convictional kindness. She doesn’t give any ground, but she also doesn’t see people who disagree with her as her enemy.” – Russell Moore (link)

Russell Moore thinks we need 1,000 more Karen Swallow Priors in evangelicalism today. He must think so, because he has appointed her as a Research Fellow at the Ethics and Religious Liberty Commission (ERLC) Research Institute. Moore approached Swallow Prior to ask if she would serve in that position sometime prior to September of 2014.

Of Russell Moore, Swallow Prior says, “Under Dr. Moore’s leadership the ERLC has become a respected and unifying voice in a fractured culture, a voice that applies biblical ethics in ways both faithful and nuanced, both orthodox and relevant. It is an honor to be a part of the Institute.”

For starters, Swallow Prior writes for Jim Wallis’ Sojourner’s Magazine – the quintessential faith-based socially progressive organization in the country. Swallow Prior, who chose to not take a side on the gay marriage issue in an article by New York Magazine, did a glowing book review for Loving My LGBT Neighbor for Christianity Today that says, “The LGBT movement is much like the Christian community in that it draws from diverse backgrounds and moral beliefs.” In the article, Swallow Prior lauds the author for arguing for “nuanced positions on LGBT questions” and a “sympathetic portrayal of same-sex attraction.” For example, Swallow Priors writes…

The book also addresses some trickier issues with wisdom, humility, and gen­erosity. For example, Stanton’s call to accommodate transgender persons in their use of public restrooms is as commonsensical as it is refreshing.

Can you imagine that? Can you imagine a Southern Baptist entity’s research fellow advocating for the accommodation of their restroom preferences? It’s happening, folks. And Russell Moore isn’t caught off guard by that. He revels in it. The former Democratic staffer is continuing his Democratic worldview from the head of the SBC’s ERLC.

The Atlantic ran an article entitled “Being Gay at Jerry Falwell’s University” and alleged that Liberty University has backed away from vocal opposition to gay marriage. As he “came out,” he lists Karen Swallow Prior (a professor at Liberty) as one who was sympathetic and supportive of his decision.

In a guest post entitled “Finding Common Ground on Abortion” at Patheos (if the title doesn’t turn your stomach, just read its content) in March of 2015, Swallow Prior desires to drop labels like “pro-choice” and “pro-life”  (in the context, this is an interview with Charles Camosy) and seeks to cooperate with  Camosy to get a “fresh perspective on the abortion debate [to] help reframe the conversation around reproductive technology, and inspire more helpful responses that address concerns with prenatal life while also addressing the great pain that such technologies aim to alleviate…”  Swallow Prior calls Camosy’s book, “refreshing and hopeful ” – and the book argues that “abortion is radically complex” and there is no “conservative position and liberal position.” Swallow Prior gives glowing accolades to the book whose author says that using the term “anti-life” to refer to abortion is a “rhetorical hatchet job.”

How many Southern Baptists would agree with those positions?

Swallow Prior wrote a piece for Relevant Magazine praising the It Gets Better Project (designed to encourage gay youth and affirm them in their homosexuality) and says that “The church should be thrilled…” Should the church be thrilled with this It Gets Better video from Hillary Clinton? Or how about from President Obama? In that post, Swallow Prior scolds the church for not being fully vested in this LGBT agenda.

Although Swallow Prior’s gay-affirming tendencies are most easily seen, it seems there’s hardly an issue where any conservatism could shine through. Swallow Prior has even written in Christianity Today in favor of the Common Core curriculum, calling it “Good News.” Swallow Prior is on the council for the radical American Humane Society (which advocates for a PETA-type ban on meat eating, a ban on hunting and lead ammunition, advocacy for gun control, etc…). Could her social-progressivism be any more cliche’?

But alas, you can research Swallow Prior for yourself. If a picture is worth a thousand words, let me instead take that route.

Like the red-carpet photo at the top of this article, the photo directly above is of Karen Swallow Prior at an LGBT film fest. That film fest, Level Ground Christian Film Festival, was founded by two students who wanted to “have a public conversation about film, gay Christianity, and the Christian life.” It is billed as “the world’s first film festival connecting lesbian, gay and transgender sexuality with faith and evangelical Christianity.” And thanks to Russell Moore, an ERLC research fellow was gallivanting on the red carpet with other advocates for “gay Christianity” all around the country.

In this photo, Swallow Prior was proudly smiling with Michael Kimpan, who works to “build bridges between the LGBT and conservative communities”…

…and Tom Krattenmaker, who wants to bring forth a “new Christian conversation about LGBT rights…”

…and remember that student that said Swallow Prior was supportive of his “coming out?” That’s him in the photo at the LGBT event, who also posted proud selfies with his former professor from his own instagram account… 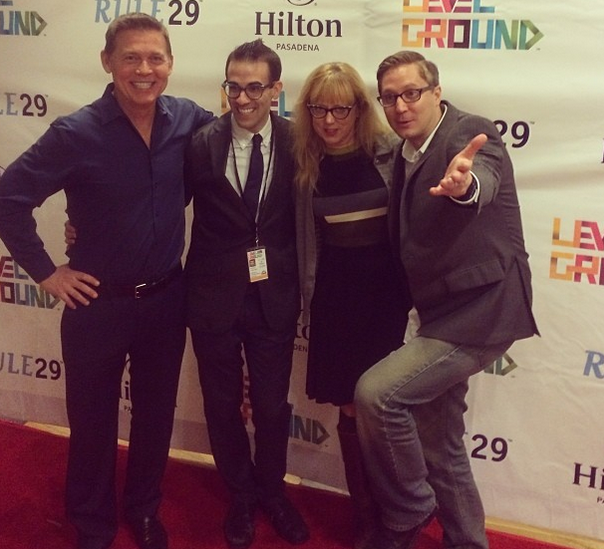 Swallow Prior not only attended this LGBT conference but was one of its speakers.

Other speakers at the LGBT conference speakers were like a who’s who of transgendered, homosexual and “LGBT” supporters. If there’s any doubt as to this being a pro-LGBT or LGBT-affirming event, check out this video from the conference…

Oh, and guess where Swallow Prior’s membership is? Is it in a Southern Baptist Church? No. It’s in a Cooperative Baptist Fellowship Church – the denomination that split off of the SBC in 1991 over the Southern Baptist’s allegiance to inerrancy, the prohibition of female clergy, and generally conservative politics. At the CBC church, she is a “reader” in their “Celtic worship service,” a recent pagan fad.

All of the above being true and documented, how on Earth does this individual work in partnership with the SBC’s ERLC as a research fellow? This is simply unbelievable and shocking. This isn’t going on behind Russell Moore’s back. His public and documented interaction with Swallow Prior demonstrate that he knows precisely who she is.

We’ve been trying to ring the warning bell on Russell Moore for two years. In the beginning, people laughed. Seldom do they today. Unfortunately, however, there is an attitude among many in the Southern Baptist Convention (and to a lesser extent, evangelicalism as a whole) that purports the notion that if someone claims a belief in inerrancy and that abortion – on some level – is bad, that they are a “conservative.”

Russell Moore, Karen Swallow Prior, and the ERLC have moved as hard left since Land’s resignation from the organization as the country has moved left during the same period of time. And yet in spite of the overwhelming evidence of the “softening tone” on these important issues that even the secular press is picking up on, people are still insisting Moore is a conservative because he’s an inerrantist and on certain issues hasn’t yet publicly capitulated. And yet, this is the man who called Jesus and “illegal alien” while pushing for amnesty. This is a man who advocated attending gay wedding celebrations. This is a man who called Karen Swallow Prior as a research fellow for the ERLC.

Wake up, Southern Baptists. Was this not precisely the type of individual that Al Mohler purged from Southern Baptist Seminary in 1993? Wake up, evangelicals. This former Democratic staffer, Russell Moore, is taking the ERLC in a trajectory that few want to go. Stop believing this can’t be the case because he believes in inerrancy, is a protege of Albert Mohler or because he likes country music. He’s a danger.

[Editor’s Note: Karen Swallow Prior is no longer a member of a CBF church as reported above, but is reportedly now a member of Thomas Road Baptist church]

[Editor’s Note: An individual has posted a rebuttal, claiming that the information provided in our citations are “out of context.” Here’s the response to that rebuttal].

Jory Micah Denies Inerrancy, Doubles Down by Denying the Trinity

Three Things You Need to Know about Unplanned and Abby Johnson