There are three laws of logic which undergird the very way in which humans reason: (1) The Law of Identity – A is A, (2) The Law of the Excluded Middle – either A or ~A, and (3) the Law of Noncontradiction – A and ~A cannot both be true at the same time, in the same place, and in the same sense.  Applying the third of these laws, one can easily come to the conclusion that someone at the North American Mission Board of the Southern Baptist Convention (NAMB) has recently not told the truth about that organization’s plans to establish an assistance fund to aid a number of predominately black churches which have recently suffered losses due to fire.

Pulpit & Pen contributor, RC, recently wrote an article which asked and answered the question, “Should Southern Baptists Give to NAMB’s Church Fire Fund?”  Jeff expressed his concern that some of the churches that NAMB may be planning to assist with its fund are not biblically sound.  By assisting such churches with Southern Baptist Missions money, Jeff argued, NAMB is enabling the sin in which those biblically unsound churches participate. Jeff was not alone in his concern.  On June 10th, Christian Blogger, Michelle Lesley, responded to a post about the assistance fund that advertised on NAMB’s Annie Armstrong Easter Offering Facebook Page.  Michelle expressed concern that “offering money would be used to help spread false teaching.” Michelle’s question and NAMB’s response are shown below: 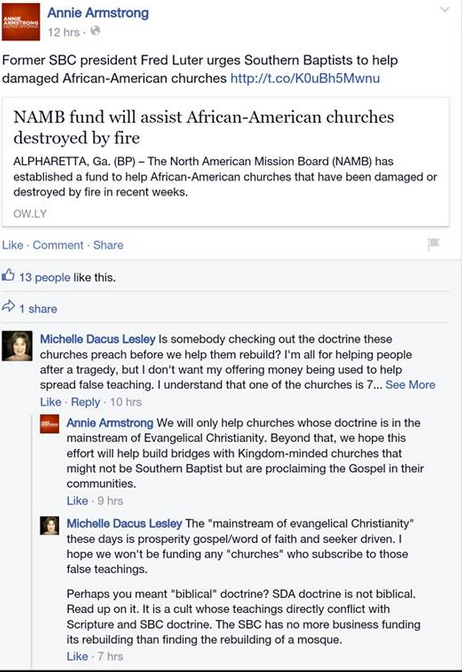 On the Annie Armstrong Facebook pages, NAMB’s response to Mrs. Lesley was clear: “

We will only help churches whose doctrine is in the mainstream of Evangelical Christianity”.

However, an article on NAMB’s website (to which the Annie Armstrong page linked) states:

“The North American Mission Board (NAMB) has established a fund to help African-American churches that have been damaged or destroyed by fire in recent weeks…Seven churches have been involved in the two weeks since a white supremacist murdered nine church members in Charleston…NAMB is starting the fund with $50,000 that will immediately be available to the churches in need of assistance.”

NAMB’s article clearly states that the aid from the fund will be “available to the churches in need of assistance.”  No mention of exclusion due to doctrine is mentioned in NAMB’s article (which provides a link at which one can donate to the fund).  However, it is abundantly clear that all seven churches are not within the mainstream of evangelical Christianity.  An article at The Atlantic lists the names of the seven churches to which NAMB refers:

One needn’t be a learned theologian to understand that all of these churches, most notably the Seventh Day Adventist church, are not in the mainstream of evangelical Christianity.  NAMB has contradicted itself; someone at NAMB is not telling the truth.

That much is clear.

What may not be as clear to the casual observer are NAMB’s motivations for starting this fire fund to help black churches.  The initial $50,000 is a drop in the bucket of NAMB’s 2015 Relief Ministry budget of $6,121,000.  However, the potential payoff in positive public relations, the return on NAMB’s investment, for assisting these beleaguered black churches is exponential.  Race relations and reconciliation have become big news items in recent months.  NAMB’s sister organization, the Ethics and Religious Liberty Commission, recently hosted a racial reconciliation summit and numerous denominational leaders have recently spoken out about issues of race.  NAMB, if it article is to be believed (and not its Facebook response to Michelle Lesley), seems to be sacrificing biblical stewardship for favor in the eyes of both the world and the church-going black community.  To sustain its revenue in an increasing secular society, it desperately needs to do so.  As I wrote in my recent e-book, The Cooperative Program and the Road to Serfdom:

“It is essential, if Cooperative Program funding levels are to be sustained, for the SBC to increase its membership among minorities, who tend to be more church-going than the non-white population as the overall population of America becomes more secular.”

The Cooperative Program is the mechanism by which the Southern Baptist Convention funds itself (and its subsidiary organizations, of which NAMB is but one).  In my book, I argue that Cooperative Program has become a largely unaccountable and controversial source of unwise central funding and central planning.  Kevin Ezell, President of NAMB, made comments about his organization’s new fire assistance fund that seem to support my contention.  Ezell stated,

“(NAMB) wanted to provide an easy, centralized way to help.”

The easiest and most efficient way to help these churches would be for individual Christians to send checks directly to those churches which they feel are most deserving and needy.  In the information age, this type of decentralized giving is easy to do.  Church names and addresses can be found with Google and checks can be sent through the common online bill pay mechanisms provided by most major banks.

Of course, this kind of private, individual giving heralds no positive PR for large denominational organizations, such as NAMB, and their leaders.  As always, when Christians give, they should consider the words of Christ:

“Beware of practicing your righteousness before men to be noticed by them; otherwise you have no reward with your Father who is in heaven. So when you give to the poor, do not sound a trumpet before you, as the hypocrites do in the synagogues and in the streets, so that they may be honored by men. Truly I say to you, they have their reward in full But when you give to the poor, do not let your left hand know what your right hand is doing, so that your giving will be in secret; and your Father who sees what is done in secret will reward you.” Jesus in as recorded in Matthew 6:1-4.

Christians should also consider the biblical admonition not to bear false witness, which someone at NAMB is apparently doing.