I’ve been wanting, wishing, waiting and praying for my white brothers & sisters in Christ to respond biblically and come out of their fear closets regarding the racial tensions that have been fanned and flamed by the liberal media and the race-baiters, whose agenda is to unequivocally create further chaos and confusion in our society, all for the purpose of gaining media attention and applause.

But no sooner than I wish, one of Christianity’s well known preacher’s sons (Barnabas Piper; son of John Piper), goes on Twitter and makes one of the most inflammatory, asinine statements regarding the Confederate flag I’ve ever heard. It’s ironic that Barnabas actually means “son of encouragement,” because the recent actions of Barnabas Piper hasn’t encouraged anyone in a positive sense, but only negative. 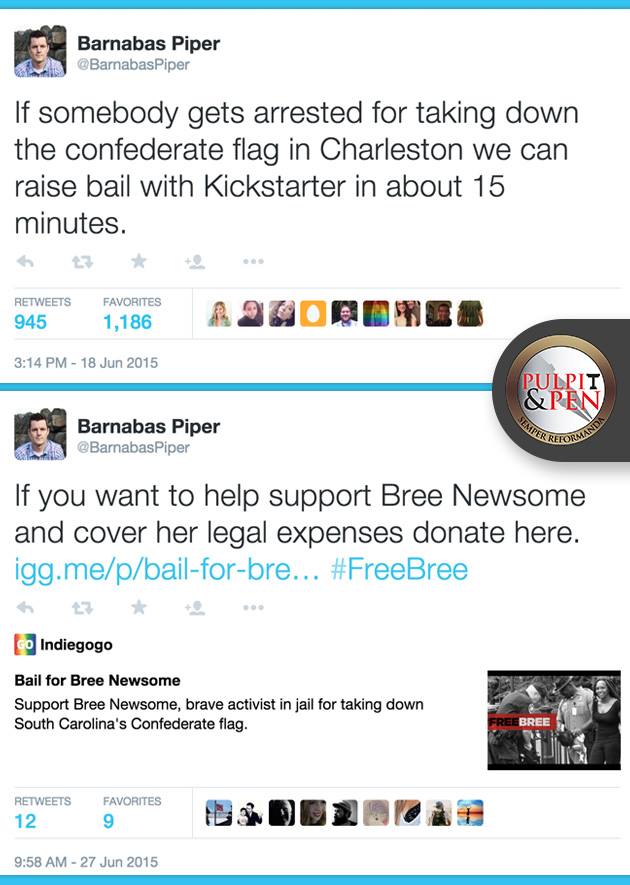 It’s one thing when comments like the ones cited above come from unbelievers. Sinners do what sinners do, right? Satan already has their minds (2 Cor. 4:4). Therefore, it comes as no surprise that their statements and actions reflect that of an unregenerate heart. But when statements like this come from one of our own, it not only surprises me, but causes my jaw to drop in utter shock and disbelief – especially when it comes from those whose influence has the potential to lead others into sin because God has given all of us influence, whether great or small, and will hold us accountable as to how we’ve used it (Matt. 18:6; 2 Cor. 5:10). But when we use our influence to lead or cause others to sin, our actions are no different than Satan (Rev. 12:4); Korah (Num. 16); or those who embrace worldly wisdom (Jas. 3:13-18).

Now, before you think I support racism or symbols that may define it, I do not. Racism and social injustice of ANY kind is sin and an offense to a Holy God who created all of us from ONE MAN (Acts 17:26), and should be dealt with like any other sin….by the Word of God (2 Pet. 1:3). Racism still exists. And depending upon the individual(s) you converse with, it exists either systemically or situationally. How should Christians respond to racism is the question? Should Christians deal with racism and injustice by employing the processes of laws that govern our society to rid ourselves of the “symbols” that reflect it? Or should we take matters into our own hands like social and political vigilantes and encourage others to join us in our “fight” for “justice”? There is a difference between participating in civil disobedience when God’s Laws are being violated versus suffering from cerebral damage.

When I use the term “cerebral damage” I am in no way attacking – nor am I intending to offend – those who physically suffer from cerebral damage of any kind. I only use this term in a spiritual sense to describe Christians who have not allowed their minds to be renewed to think wisely, intelligently or to embrace a biblical worldview in ALL matters of life and practice (Rom. 12:2).

Proverbs 1:7 says “The FEAR of the Lord is the beginning of wisdom”. That’s where Christians get their wisdom from—by fearing (i.e. to respect; to be in awe of) God. When we fail to have a holy, reverent fear of God, actions such as the ones publicly encouraged by Barnabas Piper will inevitably result. Christians are to avoid evil (Prov. 16:6b). The Bible forbids Christians to partner with the wicked in their sinful ways and to avoid their evil deeds (Exod. 23:1; 2 Chron. 19:2b; 2 Cor. 6:14-17). Christians are to discourage people from committing sin; not encourage them to do it.

In my Twitter conversation with Barnabas Piper, he intimated and justified his support of Bree Newsome as only “civil disobedience,” due to the Confederate flag still being flown in Charleston, SC.

But how is such behavior considered to be civil disobedience? Biblically, civil disobedience is defined as one’s refusal to obey laws that violate God’s law (Acts 5:29). When I think of civil disobedience, people like Hananiah, Mishael, and Azariah (aka Shadrack, Meshack, and Abednego), Daniel, Peter, John, the Apostle Paul, Polycarp, etc., come to mind – not someone who willfully breaks the law and misapplies Scripture while doing so.

So again, how does flying a flag (Confederate or otherwise) justify Christians encouraging someone to illegally remove it and to encourage others to help support their crime by creating an online account to help pay for the criminal’s legal expenses? What part of “You shall not join hands with a wicked man (or woman)” does Barnabas Piper and his followers NOT understand (Exod. 23:1)?

Scripture clearly teaches how Christians are to conduct themselves regarding civil government (Rom. 13:1-7; 1 Pet. 2:12-20). Therefore, those who willfully violate the law without biblical justification aren’t participating in civil disobedience, but are in sin and suffer from spiritual cerebral damage (Prov. 12:1).

For those of you who vehemently disagree with me and believe the actions of Barnabas Piper and Bree Newsome are justified, here are a few questions I would like to ask you:

This issue is so great a concern to me, that I would like to extend a public invitation for Barnabas Piper to appear on my radio show as a guest to discuss the issues raised from a biblical perspective. I know he doesn’t mind doing radio interviews. I’m willing to make whatever necessary accommodations to have him on mine.

[Editor’s Note: We thank Pastor Woods for posting his response to Barnabas here. You can also view our original post on Barnabas Piper’s encouraging of criminal behavior here. For a thorough Biblical analysis on why Christians should not engage in this type of behavior, check out these links from Barnabas’ dad here, here, here and here]

The Affluent Franklin Graham and His Patriotic Scripture Twisting