“Behold, the sower went out to sow;  and as he sowed, some seeds fell beside the road, and the birds came and ate them up. Others fell on the rocky places, where they did not have much soil; and immediately they sprang up, because they had no depth of soil. But when the sun had risen, they were scorched; and because they had no root, they withered away. Others fell among the thorns, and the thorns came up and choked them out. And others fell on the good soil and yielded a crop, some a hundredfold, some sixty, and some thirty. He who has ears, let him hear.” Jesus, the Son of God

So goes the story in Meansville, Georgia as reported by the Christian Post.  According to Marc Pritchett, founder of RUSH Ministries, these commitments took place during a ministry event put on by his organization on May 9th, 2015.  Pritchett claims that “10,000 souls” have been reached through Rush Ministries since its founding over a decade ago.  Pritchett estimated that approximately 7,000 young people attended his May 9th event in Meansville.  By the numbers, Pritchett is claiming that 13.21% of attendees were saved.  This figure is quite the coincidence given that Georgia Baptist Evangelist Tony Nolan spoke at the event.  Last October, Nolan spoke at a Chapel Service at Brewton-Parker College in which 108 at salvations were recorded.  This amounted to 13.88% of that school’s student body.  13 seems to be the magic number for vaunted evangelist Tony Nolan.

According to eye-witness accounts that have been relayed to me, a typical Tony Nolan sermon consists of manipulative appeals to walk the aisle. Nolan encourages his hearers to imagine things such as having their face burned off in a car accident in order to get an idea of the eternal hell to which they are headed.  After such scare tactics, compounded by raise-your-hand type peer pressure decision counting methods, Nolan records numerous salvations which are then gleefully reported to the public.

The discipleship statistics of Nolan’s converts are not widely, if at all, publicized.

Burning in Sun and Choking in the Weeds

Nolan’s seemingly inflated conversion numbers are troubling in and of themselves.  However, something Marc Pritchett said to the Christian post disturbed me to my core.  Given that I often write about apologetic and discernment concerns, a lot of troubling stories come across my desk.  I usually address them from a coldly logical and intellectual perspective; that’s my nature.  There’s so much charismania, corruption, hero-worship, and capitulation to worldliness in the visible church that it’s almost easy for me to become simply used to it in the same way that a police officer becomes used being around the corpses of murder victims.  Yet, last night, in the midst of these tragedies that have become so common place, I reacted viscerally to something that Marc Pritchett, told the Christian Post:

“The nature of [the] event, whether it be concerts, celebrities, games, or other things that we do, are all aimed at getting those kids in the community, or in the world if you will, not in the church necessarily, but to get the church friends to bring the students that may never walk into a church…They realize not only is being a Christian fun, not only is it cool, but also, eternal hope is sandwiched within all that stuff.”

Pritchett and his companions, in the midst of a concert atmosphere told unchurched young people that being a Christian is “fun and cool”.  Then, they invited them to become one.  After reading Pritchett’s words, I turned in my Bible to Matthew 13:3 and read, “Behold a sower went out to sow.”   I didn’t read the rest of the pericope.  I knew it already.  In the parable of the sower, Jesus told of people (I have always imagined them to be young) who received the gospel message with joy but later burned up like a parched plant in the sun when persecution and affliction arose.  Others received the gospel with joy and yet worldly worries and the deceitfulness of wealth choked them out like a plant among the thorns.

I thought of nine hundred twenty-five young people, in the company of wealthy celebrity Christians like Sadie Robertson and Lecrae, being sold the outright lie, along with their purchased tickets, that Christianity is fun and cool.  The sadness I felt in the midst of this thought was a deep one.  From my reading of the Bible, I do not take Paul to have communicated that being shipwrecked, beaten, hungry, thirsty, in hardship, and in danger as fun and cool.  Tradition tells us that Paul was beheaded.  The book of Acts tells us James the brother of John was beheaded.  Tradition tells us that Peter was crucified.  Thousands of Christians have been persecuted and killed for their faith.  The one Apostle, John, who was not killed for his faith (merely exiled to a lonely island) wrote of having a vision of “all the souls who had been beheaded because of their testimony of Jesus and because of the word of God.”

Rap music is cool.  Duck Dynasty is cool.  Being persecuted and beheaded is not.  I’ve never been beheaded but I have been through times when living out my Christian convictions was not fun.

“In the world you have tribulation, but take courage; I have overcome the world.”

“If anyone wishes to come after Me, he must deny himself, and take up his cross and follow Me.”

Marc Pritchett is a liar and, I believe, he is helping the devil sow tares among the wheat.  There is a very real devil out there, seeking whom he may devour.  He is a terrible and ancient foe who comes to steal kill and destroy.   He’s done since the time of the Garden of Eden and will so until Christ returns.  Lecrae sells records.  Sadie Robertson sells her clothing line.  Nolan sells tickets.  The devil sows tares.  They help. 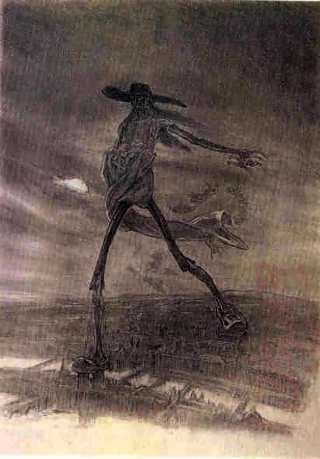 Here Am I Send Me

Christian reader, you and I can’t stop the Tony Nolans and Marc Pritchetts of the world from trying to sell tickets to their festivals and then claiming victory after recording emotionally charged and very likely disingenuous salvations.  What you can do is stop patronizing their business and farming out your evangelism to them and their elite group of professional evangelists.

If you have been saved through the repentance of sin and belief in the risen Christ’s Lordship, then you have the Holy Spirit.  You are empowered, by God Himself, to successfully evangelize the lost and successfully disciple new Christians.   You do not need Christian rap.  You do not need Duck Dynasty.  You need the Bible and the Holy Spirit.  You have both.

Take hold of the young people in your church and in your community and you give them something to eat.  Use the money otherwise spent on a concert festival ticket and buy some bible commentaries and systematic theology texts.  Then, you sit down with someone one on one and disciple him.

Dear young person, if you were at this festival and are reading this, then I want you to know what it really takes to become a part of the family of God.  You need to genuinely repent of your sins and believe in the Lordship of the risen Jesus.  After that, according to scripture, you are expected to live a life in keeping with the tenets of the Christian faith.  You are expected to live Holy and set apart from the world.  You will be persecuted for it.

Do you know the reason that the headline of the Christian Post article says that you made a “commitment” to Christ instead of saying that you were “saved”?  For one thing, Sadie Robertson’s Church of Christ teaches that you aren’t truly saved until you are baptized.  You’ve made a commitment on her view, but you aren’t saved.  Did she, Lecrae, or Tony Nolan tell you that?  Did they tell you that the Christian life is not easy and that it’s not going to get any easier in our country as our culture becomes more hostile to biblical faithfulness.

If you still want to take up a cross, an instrument of torture and shame, then take it up and follow Christ.  I’ll be glad to call you a brother or sister.  Know this:  When you come to genuine faith in Christ, it’s not just your commitment, it’s His.  You can never uncommit.   Thousands of people have made a decision for Christ of some kind at the kind of festival you attended.  Many of them uncommitted when the sun burned and the weeds choked.  If you made or if you make a genuine commitment, you will not be burned or choked.

Sit back and think about that.  Pray about it.  Consider it.  If you want to discuss it, one on one, contact me.

It’s not about cool, it’s about Christ…and He’s the Lord and judge of all creation.  If you come to Him, He will not forsake you.  In all these years, I can tell you, He’s never forsaken me.

[Contributed by Seth Dunn, this post is also published at my personal blog.  You may leave your comments there]