“I was once saved…but now I’ve asked Jesus back into my heart.” – Brewton-Parker student

The mark of a successful salesman is the ability to sell the same product to the same customer more than once.   Finding new sales prospects and building relationships with them is difficult; it’s much cheaper to keep an existing customer than to invest in a new one.  The Roman Catholic Church figured this out years ago.  Its product is salvation.  Whenever one of her members runs out of grace, he can run back to the Catholic Church for works-based absolution.  The Catholic Church got so good at selling its product that clergyman Johann Tetzel is said to have proclaimed, “As soon as a coin in the coffer rings, the soul from purgatory springs”.   Comments like this are what sparked the protestant reformation.  Men began to read the Bible and discover that scripture teaches that man can only be saved by the grace of God, through faith alone, in Christ alone…no works needed; just genuine repentance as a demonstration of the faith that justifies.   Furthermore, man can only be saved once and he can never lose his salvation.  Still, this hasn’t stopped some evangelists from trying to save the same people twice or even more times, at least on paper.

God is sovereign.  God is all-powerful.  God can do all things.  However, He cannot make married bachelors or square circles.  Nor can He save someone who has already been saved.  Imagine a hypothetical world with ten thousand people.  In that world, the most people God could save would be ten thousand.  It would be impossible from Him to save any more people than that because, after ten thousand, there would be no more souls to save.

If there were a Baptist convention in that hypothetical world of ten thousand people, it would claim to have 15,000 members.

Baptists are Great Commission people.  Baptists love to hear about salvations.  Baptists give to missions and for the training of missionaries.  Thus, an entity stands to reap quite the financial windfall if can demonstrate that it is generating salvations.  Like a corporation trying to raise capital by showing evidence of windfall profits, there is a temptation for evangelists to show evidence of windfall salvations…even if this means reporting that people who have already been saved were saved again. There is a demand for salvation statistics.  Where something is demanded, it will be supplied.

On October 14, 2014, Brewton-Parker College reported that 108 people were saved at its chapel service. 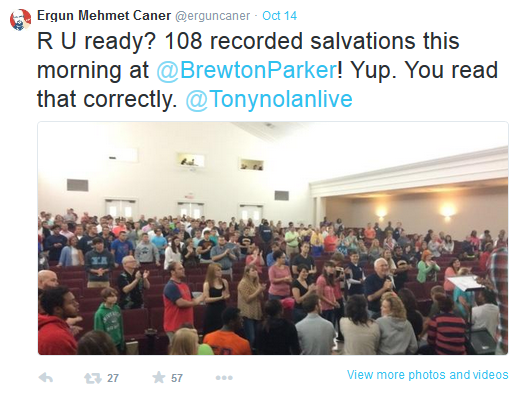 The enrollment of the school, as of 2010, was 778.  Assuming that its enrollment hasn’t precipitously plummeted in the wake of accreditation troubles with SACS, 13.88% of its total enrollment was saved on October 14th.  Think about that.  Brewton-Parker is a Baptist College that is fed from Baptist Churches.  What are the odds that 108 students who hadn’t prayed the Sinner’s Prayer already showed up there at all?  A claim like this seems almost completely unreasonable. Apparently we weren’t the only ones to take note of this supposed move of the Spirit. Consider the case of William Carey, the father of modern missions, who uprooted his family from England in 1793 and sailed to India to evangelize the lost people of that land.  It took Carey seven years to baptize one convert.  Yet, Brewton-Parker reported 108 salvations, of Bible-belt residents, in one day.  Or consider that the revival at North Hampton, that led to the Great Awakening, saw a high of sixty conversions over the course of one week as recorded by Jonathan Edwards. But Brewton-Parker saw 108 salvations in one hour?

When businesses make claims of windfall profits, their auditors apply analytical procedures to determine if the claims are reasonable.  What were profits in similar industries?  Do windfall profits make sense given the economic climate?  What kind of profits are its competitors earning?

Ask yourself, “Can I think of any other Baptist college that saved almost 13% of its students in one day?”  It’s doubtful that you can, unless Enron has opened up a Baptist college.  The report numbers just don’t hold up to snuff?  Why? 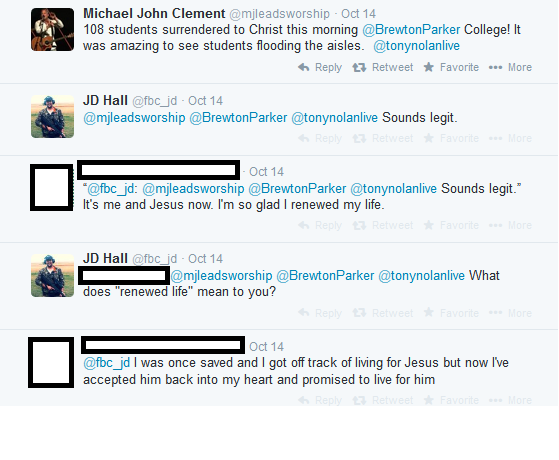 Upon this student’s response to JD’s brief comment regarding BP’s silly “recorded salvation” claims, saying “I’m so glad I renewed my life,” JD asked what they thought that meant, while wondering if Peter Lumpkins – the VP of Communications – set the student up to tweet this in response to him, a plausible scenario in that @BrewtonParker favorited their tweet almost immediately. What @BrewtonParker didn’t favorite was their response, “I was once saved…but now I’ve accepted him back into my heart…” No, BPC will not be favoriting that tweet.

The student RT’d JD’s response, “You got saved again. That’s great,” obviously oblivious to the incredulous tone. JD then tweeted to the young woman this free book in pdf format, The Gospel Call and True Conversion and politely encouraged her to read it, which the student received graciously. Peter Lumpkins didn’t receive that advice nearly as graciously… 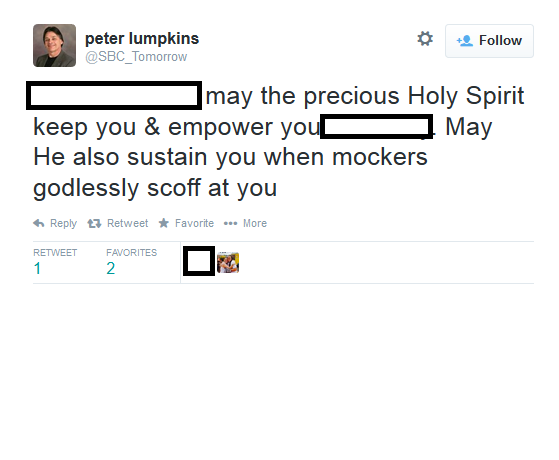 I hope you can see that no one was “godlessly scoffing” or “mocking” this student. Rather, many are concerned for her spiritual well-being. How many others were “saved” the last time BPC had an evangelist visit, and how many will be “saved” the next time?  How many were told that they were saved because they said the sinner’s prayer, walked an aisle, or shed a tear?  How many of those students, like this one, knows so little about salvation they think they can loose it and then regain it by “asking Jesus is their heart” again and “start living for Jesus again” (and when they stop “living for Jesus,” need to be saved again – indicating a works-righteousness that falls short of justifying faith)? We see that the Sinner’s Prayer mythodology is a benchmark of this so-called revival happening at BPC, indeed discussed in the very revival where this poor student was “saved again” in the sermon entitled God’s Care, the Sinner’s Prayer, the Pharisee’s Stare.

Sadly, this type of revivalism thrives where there is no discipleship, and discipleship thrives where this type of revivalism is scarce. Where Christians are properly discipled (and are actually converted and regenerate to begin with), the Sinner’s Prayer Mythodology and revialist schemes simply do not work. In the backwoods of Georgia and other places where Finneyism thrives, full altars and shallow spirituality reign supreme. In fact, careers and donation dollars depend on it.

The fundamentalist, Finneyist tradition in the deep south has made the altar call decision an idol just like fundamentalists of other strands have made foot-washing and the more extreme, snake-handling. Whole careers of men like Bill Britt and Tim Lee rely upon this very kind of methodology that lead to altars full of people who have said the Sinner’s Prayer two, three, four or more times – each time being pronounced “saved” and added as a notch upon the evangelist’s belt.  Brewton-Parker needs to maintain the image of a great spiritual revival because they’re vying for a bigger piece of the Georgia Baptist pie and have a disgraced president and their accreditation is hanging on by the skin of their teeth, neither of which makes the dough-dispensers in the GBC want to give liberally to the failing college.

Sadly, an entire religious tradition that honors, celebrates and even venerates ridiculous conversion numbers that virtually no one takes seriously (even their compatriots can barely manage a polite nod and congratulatory, halfhearted golf clap), one that relies upon perpetuating fraudulent claims of great revivals, often are forced to rely upon fraudulent leaders to perpetuate those claims. At the whole, it’s an integrity problem from top down.

In the mean time, the people suffering are those who were told that salvation is a decision to be made at an altar and words to recite. For all those who have been pronounced saved from Sinner’s Prayer Mythodology (maybe one, two, three or more times), please read The Gospel Call and True Conversion.

[Contributed by: A Collaborative Effort of the P&P Contributors]

PS: To this Brewton-Parker student, we want you to know that most of what you heard at BPC is true. Sin separates us from God.  Jesus died for sinners. God is offering you his love. You are invited (to be technical, commanded) to repent of your sins and believe in what Jesus accomplished  by his death and resurrection. All of these things are wondrously, wonderfully, gloriously true. But please do not consider yourself saved because you walked that aisle at the BPC chapel or repeated a prayer. Virtually everyone you’ve ever met in Georgia has said that prayer, and most are walking the wide path that leads to eternal destruction.  “Inviting Jesus into your heart” doesn’t really mean anything; it’s a made up, silly term. Don’t believe yourself saved or unsaved by the sincerity with which you said that prayer – you were probably sincere last time and you could always be more sincere next time. Rather, turn to the book of 1st John, which was written so that we can know if we have eternal life, and see if God the Holy Spirit is conforming you to Christ. If you have true faith in Jesus and in his death, burial and resurrection (which is what saves us) then the Holy Spirit will work in you in the way 1st John lays out. Read the book we linked for you above, and test everything you hear with the Scripture. Blessings, the P&P staff.