But above all, my brothers, do not swear, either by Heaven or by Earth or by any other oath, but let your “yes” be yes and your “no” be no, so that you may not fall under condemnation. – James 5:12

Joel McDurmon posted a post-debate rebuttal at American Vision today, complaining (ironically) that JD spoke too much about the civil code being obligatory.

The debate’s resolution, of course, was “Mosaic Civil Laws Are Obligatory for Civil Governments Today.” Joel’s certainly entitled to his post-debate thoughts. What he is not entitled to under the debate contract with JD, however, is the audio of the debate which he used to create a transcript of JD’s opening statement.

As you’ll see in the screenshots below, the debate contract stipulated that both sides would have equal ownership and access to the debate footage. Both sides are owners of this property. Joel, having debate footage and using it for a rebuttal, while restricting access to JD, is clearly contrary to the contract provided.

PDF of debate agreement, if that screenshot is not big enough for you: McD-Hall DeBate Rules.

We’ll let the document speak for itself. Both parties will have “equal rights” to it. Clearly, one side using it in post-debate rebuttal and the other not having access to it is not “equal rights” to the material. Both sides are to have the material in unedited versions. And who are the “both sides”? According to the agreement, both sides are JD Hall and Joel McDurmon.

In previous conversations with McDurmon, JD had asked how quickly the audio would be released to both sides. At first, JD was told before he left Phoenix. At the debate, JD was told Tuesday, and an American Vision AV coordinator confirmed this date and took JD’s email address to dropbox him the audio link. The next day, JD sent these texts to McDurmon. 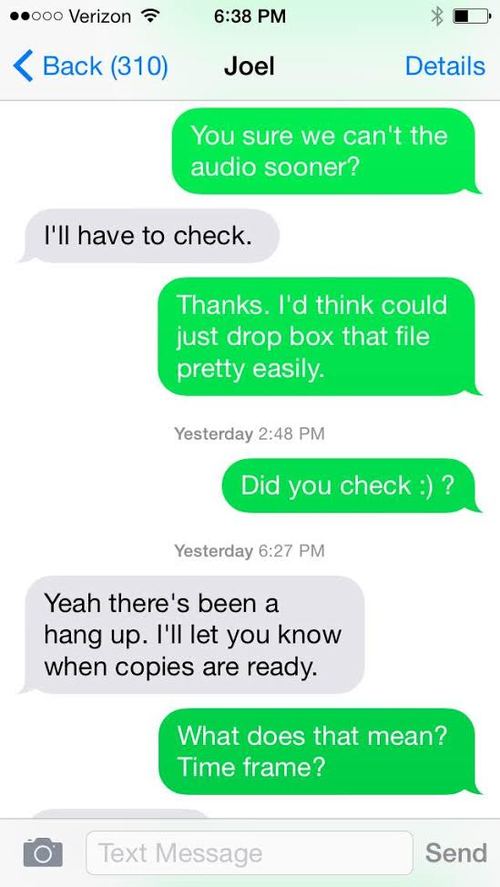 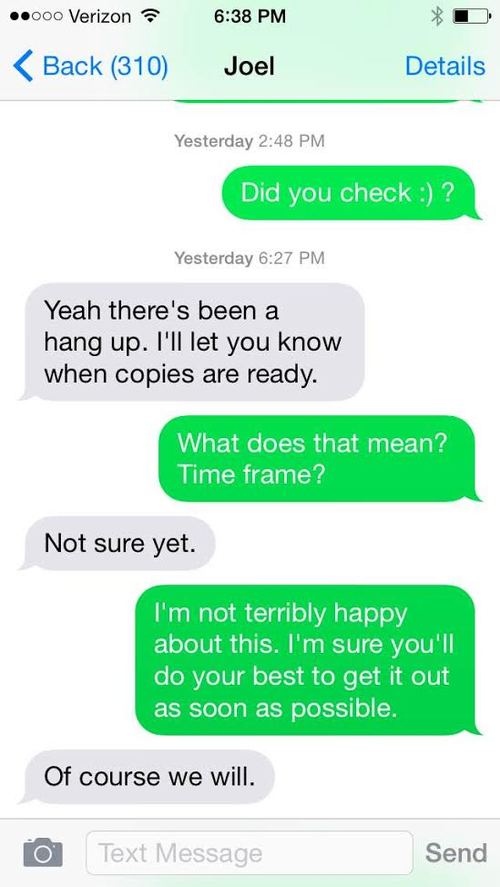 It was after this we saw Joel was using the audio for his rebuttal, without making it available to JD. Then, these comments were left on the American Vision post: 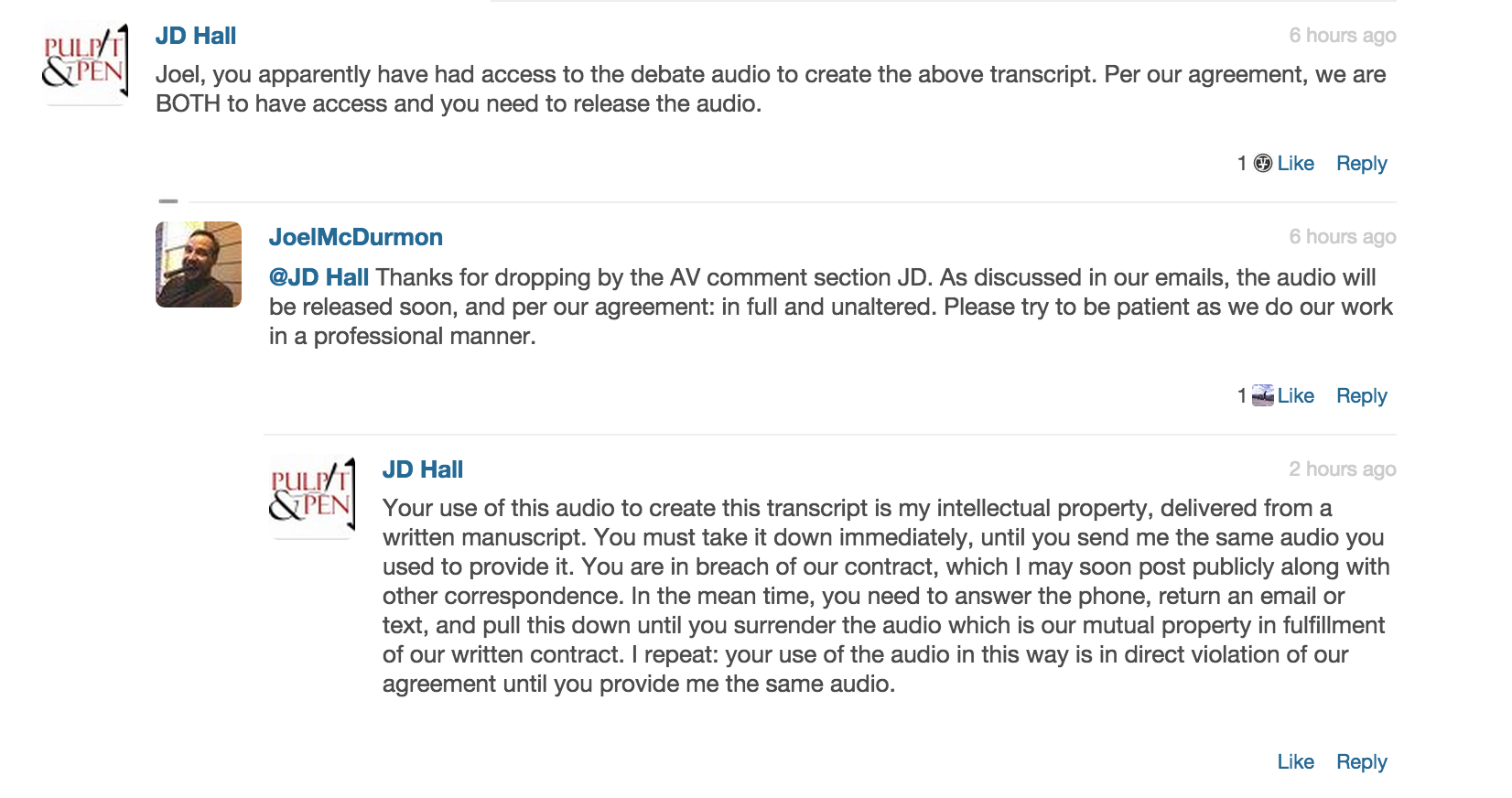 Joel then sent this email:

Please compare this to the contract, which stipulates that both sides will receive equal access to the recording. Now, Joel says that JD doesn’t have access to Joel’s footage or audio? It is their footage and audio, Joel says. Joel indicates there will be a loss of revenue to use their footage for JD’s publication. Notice, nowhere in the debate contract stipulates JD wouldn’t have access to the footage or be able to provide it to the public. In fact, it’s quite the opposite. Now, Joel says that JD will have to pay money that would cover both production costs and expected revenues from its sale, or purchase their “production” at wholesale. A “production” created for sale is hardly an unaltered copy. Nowhere in the contract does it stipulate that if JD wants to receive a copy of the audio or video he would have to help share in production costs. It should be noted that Joel wrote this contract, and should have known what was therein. Also notice, Joel admits that he verbally agreed to release the footage to JD immediately – even though he goes on to say in the next response that he was just being “agreeable.” Of course, being agreeable, is agreeing.

Notice that Joel speaks of American Vision’s rights to the property. Of course, Joel and Jordan both agreed to a contract that would provide both equal ownership and access to unaltered video and audio. In the mean time, Joel wants JD to “compensate for a fair share of production costs and projected lost revenue.” And then, they say that “You would stand to profit from our labor and our property.” Actually, the contract laid out whose property the debate footage is. And in Joel’s rebuttal post, he has used that audio and is in possession of it, and JD is not. Furthermore, JD has planned on releasing the footage for free, and would profit nothing.

We are sorry that American Vision and Joel did not think through how they could profit from the video and audio if JD also would receive the rights and planned on releasing it for free before the debate and stipulated otherwise in the contract. But, they did not. It is wholly unacceptable to give footage and recording to Joel for his use, and to withhold it from the other party.

JD has called Joel many times today, and explained that if there was not resolution, he would be releasing all documents relating to this debate agreement.