The religion of the Baptist is an inward, spiritual religion, that of the Campbellite an external, formal, mechanical religion. Between them there is the difference of the poles. People sometimes say that Baptists and Campbellites are so near together that they ought to unite. As a matter of fact, there are no two denominations on the face of the globe farther apart. There is absolutely only one point of agreement between them, and that is the form of baptism, the outward observance of the ordinance. They differ in every other respect.1

Alexander Campbell, the 19th Century founder of the Churches of Christ, vigorously opposed being given such a title. When a newspaper in New Orleans reported him as such, Campbell said “You have done me, gentlemen, too much honor in saying that I am the ‘founder’ of the denomination, quite numerous and respectable in many portions of the West, technically known as ‘Christians,’ but more commonly as ‘Campbellites.'”

Campbell’s assertion is at the heart of his faith-movement, of whom its adherents Southern Baptists have traditionally called Campbellites. Campbell’s movement was called the Restoration Movement (or the Stone-Campbell Movement, among other names), and was an attempt to undo the trend toward denominationalism and disunity in the Universal Church. In ironic reality, the movement eventually anathematized any and all Christians not baptized by the denomination Campbell founded.3 The message of the Campbellites became loud and clear; the Church of Christ is the “One True Church” – anything else is an imposter and sham –  they and claim, as do the Landmark Baptists, perpetuity back to Christ.4

“Ours is the church you read about in the Bible particularly in Acts 2. Ours is the only true, visible church on earth. Our church began in A.D. 33. A person must be a member of our church if he hopes to go to heaven.”5

The Campbellite belief in their perpetuity to the first century left them to assert that a Church of Christ minister be be the one baptizing or the sacrament is considered invalid.6 Other aberrant beliefs held by the Campbellites include baptismal regeneration and notable others.

There is no such thing as outward bodily acts in the Christian institution; and less than in all others, in the act of immersion. Then it is that the spirit, soul, and body of man become one with the Lord. Then it is that the power of the Father, Son, and Holy Spirit comes upon us. Then it is that we are enrolled among the children of God, and enter the ark, which will, if we abide in it, transport us to the mount of God.6

…and one more notable distinction is their repudiation of all confessons or creeds.

There are other eccentricities of the Campbellites, like the prohibition against musical instrumentation, that may be strange but don’t rise to level of heresy. The distinction of Campbellism that should be noted, again, is their anti-creed policy. The precipitating event(s) that led the Campbellites out of the Baptist faith was the growing influence, acceptance and common endorsement of creeds among Baptists – in particular, the use of the Philadelphia Baptist Confession – a confession embraced by the majority of those who would form the Southern Baptist Convention. Campbell’s repeated repudiation of the Philadelphia Baptist Confession and all other confessions led to a number of [informal] creeds of his own, including “Where the Bible speaks, we speak. Where the Bible is silent, we are silent” and “No creed but the Bible” that are – ironically – often repeated today by Southern Baptists outside of an understanding of their historic origins.

…By the nineteenth century, Baptists had produced many… confessions, but the one against which Campbell directed most of his ire was the Philadelphia Confession of Faith, a document printed for the Philadelphia Baptist Association by Benjamin Franklin in 1742. By the 1830s it exerted a magisterial influence among Baptists North and South. At the founding meeting of the Southern Baptist Convention in 1845, each of the 293 “delegates,” as they were then called, who gathered in Augusta, Georgia, belonged to churches that embraced this confessional standard.8

As opposed to the Campbellite doctrine as our early Southern Baptist forbears were for reasons of doctrinal error (as this 1900 Anti-Campbellite booklet, Campbellism Exposed, produced by the Baptist Sunday School Committee indicates) they were equally opposed for reasons related to the Campbellite’s complete eschewing of any confession, which have proven a pivotal part of our identity in the SBC.

Apparently, it seems, the Campbellites have won the battle on that front.

Today, I saw a tweet from Dr. Adam Harwood (who has widely received the – I believe, well-earned – charge of semi-Pelagianism for his dismantling of the historic definition of Original Sin), professor at New Orleans Baptist Theological Seminary, who promoted the doctoral dissertation of a recent graduate. The list of the student’s academic memberships was startling to me – and even more startling, Harwood’s bold mention of them as though they’re not controversial. The list includes; Society of Biblical Literature, North American Patristic Society, Stone-Campbell Scholars Community, and Disciples of Christ Historical Society. In short, the student/graduate is a Campbellite. 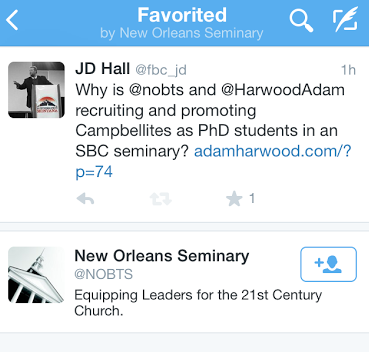 Notice, they favorited the tweet.** Baptists of the 19th and early 20th century would be rolling over in their graves.

Now here’s a disclaimer. I realize I am probably one out of a dozen people on the planet that care about this. I totally, totally get that. I understand that Paige Patterson enrolled a Muslim at Southwestern Baptist Theological Seminary and messengers at the SBC applauded him – literally. Then, trustees at SWBTS pledged to change the bylaws to enroll more. Nobody cares. I get it. Russell Moore is breaking bread with the gay “community.” Little outrage ensues. Now, he’s going to the Vatican, and other than the boys over here at the Pulpit & Pen, I’m not sure anybody cares. With all of this going on, enrolling and promoting a Campbellite in one of our Southern Baptist seminaries is hardly newsworthy. After all, some would argue, Harwood is just promoting a future colleague.

Remember that whole bit about how a major tenet of Campbellism is the rejection of all creeds and confessions? Well, it turns out, Southern Baptists have one. It’s called the Baptist Faith and Message, in case you haven’t heard of that before. Does New Orleans Baptist Theological Seminary require its students to affirm the BF&M? Apparently, it does not.* Why not, I would ask? Why are we giving credentials to those who believe in baptismal regeneration?

No, seriously. I know I’m just a big troublemaker for even asking the question. You know, a fuddy-duddy. A kill-joy. But might someone answer? Why are we giving credential$ to tho$e who believe in bapti$mal regeneration? Have we sold out the principles set forth in our confession to allow those who deny our confession enrollment and our hand of partnership, even to go so far as to view them as future colleagues? Have we simply lost our mind? Is it another of Patterson’s evangelism strategies? Why on earth are we doing this?

I can think of no other possibility than the continual advent of Downgrade. It seems that our confession means nothing to the seminaries created to contend for it.

PS: By the way, the most famous Campbellites of our day are probably the folks from Duck Dynasty. If you want to hear them talk about faith and baptism being necessary for salvation, Lifeway sells all their resources.

* I’ve since heard that it does. I’m awaiting confirmation. One wonders how a Campbellite could sign the BF&M2000 and why the seminary would let them. [Update: NOBTS does not require a signing of the BF&M]

** I received an email this evening from NOBTS, stating that the tweet was favorited on accident. Interestingly, they also favorited at least one other tweet in a related exchange.

3. Interestingly, many of the original proponents of Joseph Smith’s teaching came from among the Campbellites (including John Murdock, Isaac Morely, Parley Pratt, Lyman Wight, Orson Hyde, Edward Partridge, John Corril, Oliver Crowdery, Sidney Rigdon and others). Also, interestingly, before his movement took on most of its peculiar distinctives, the former Presbyterian-turned-Baptist and his followers referred to themselves as “Reformed Baptists.” Campbell, more so than most other denominational founders, demonstrated an almost-perpetual theological evolution with never-ending doctrinal shifts.

7. The Church of Christ would deny use of the term sacrament to refer to baptism, but by all definitions regarding the term, their view of baptism is clearly sacramental.

Nine Reasons Why Discerning Women Are Leaving Your Church

Jennings Brags About His Genitals, Attacks Victims and Accusers in Latest Video

Monkey Business: The Scopes Monkey Trial and its Impact on American Fundamentalism