“I tell you that in the same way, there will be more joy in heaven over one sinner who repents than over ninety-nine righteous persons who need no repentance.” Luke 15:7

Recently, the Pulpit and Pen published an article that was critical of what we feel are dubious salvation statistics coming out of Brewton-Parker College.   In that article, the Pulpit and Pen identified reasons to be suspicious of the Brewton-Parker President’s recent claims of 108 salvations (or 14% of its student population) in one chapel service. 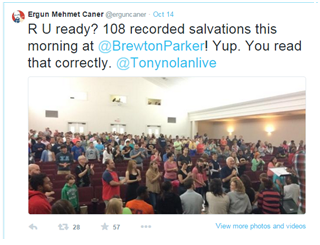 Of course, any claim made by the career charlatan Ergun Caner should be met with suspicion.  However, the idea that 14% of his Baptist college’s population was saved in one day is especially ridiculous, even for him.  If Caner is to be believed, it’s just a banner year at Brewton-Parker.  Even the campus fraternity’s haunted house is breaking records! 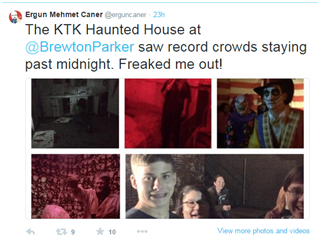 Of course, wouldn’t it be nice if such salvation claims were reasonable?  Yes, it would be.  After all shouldn’t Christians, rejoice at reports of salvation?  Yes, we should.  From free-wheeling charismatics to frozen-and-chosen Calvinists, all of God’s people should be ready to join the party of celebration when the Master calls someone to Himself.

Recently, we found such a reason to rejoice.  We came across a reasonable report of salvations from a Baptist church in Tennessee.  Such a report provides an occasion for joy.  It also provides an occasion to compare and contrast a modest report of salvations with the wild claims of emotional revivalism that take place at places like Brewton-Parker and Steven Furtick’s Elevation Church.  We won’t post the entire report from Tennessee church here, but will cover some of the salient points:

As you’ll notice, if you read the account from the church in Tennessee, no gaudy statistics are provided, God alone is glorified, no professional pictures of preachers are provided, and the story is not about the exploits of any one man.  Contrast that account with what you’d see and hear from some evangelical megachurches and megapreachers.  This is not a story that will make the Baptist Press.

Keep in mind, the church being examined did not ask the Pulpit and Pen to provide this comparison any more than Brewton-Parker asked to be negatively criticized.  No contributor of the Pulpit and Pen is a member of this church (one attended there as a child). Nor does the Pulpit and Pen hold itself up as an arbiter of who is truly saved.  That is up to God’s judgment.

God knows who has truly repented and come to faith in Him.  He will judge the quick and the dead.  To Him alone belongs the glory.

Holy, Holy, Holy, is the Lord God Almighty who was and is and is to come.