Peter Lumpkins is  Vice-President of Miscommunications at troubled Brewton-Parker College and spokesman for Ergun Caner. His son-in-law, Joe Donahue, has just been hired as Senior Pastor at First Baptist Church of Lavaca, Arkansas. On their website, you can click a link to find out more about their new pastor.

Donahue’s credits, according to his resume’, including:

Donahue seems to be the typical vision-casting seeker-friendly pastor, which may or may not be your cup of tea. While so called “vision-casting” is not something a Pastor is called to do, and suggests some deep, deep problems with his ecclessiology, the purpose of this post is not to cast aspersions on his character, but to draw attention to what really stands out in the pastoral candidate campaign material (we know of no other way to describe it), which is the explanation for Donahue’s termination from the Richmond Outreach Center. 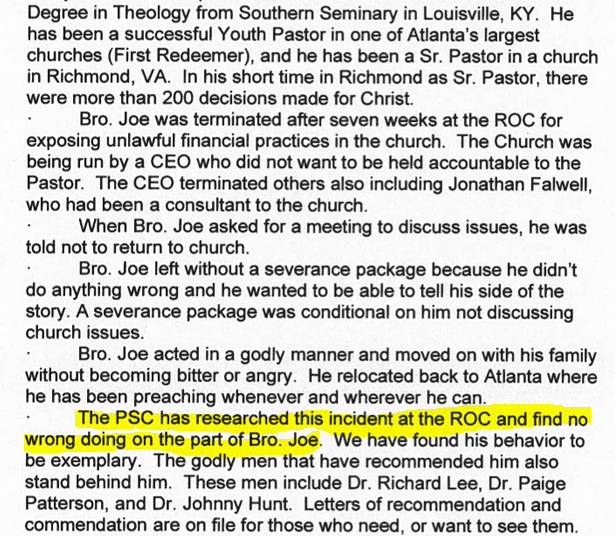 After seven weeks, Joe was fired by a CEO for exposing illegal criminal behavior in the church. Demonstrating the CEO’s run-away behavior, the letter from the search committee states that he even fired Jonathan Falwell (gasp!) as a “consultant” for the church. Of course, after the recent scandals at Liberty University including Jonathan’s multiple invitations to Glenn Beck to preach at Liberty, the latest of which Beck speaks of Joseph Smith as a prophet, and their provost announcing a partnership between Liberty and Benny Hinn, one wonders why any church would have as a consultant, Jonathan Falwell.

But have no fear; the pastor search committee has researched this incident and find no wrong doing on the part of Donahue. Furthermore, Donahue’s campaign material states that “Very prominent leaders within the SBC are fully aware of the events, and can offer an unbiased ‘rest of the story.'”

So, who are these “prominent leaders within the SBC” that can totally vouch for Peter Lumpins’ son-in-law? 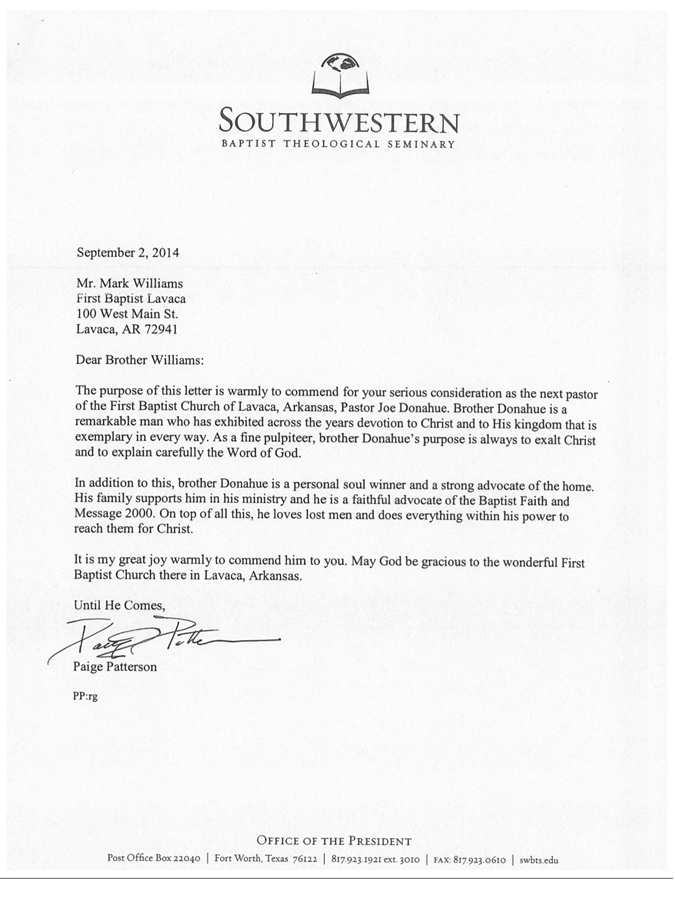 The Pulpit & Pen doesn’t know if Donahue’s public repudiation of the Richmond Outreach Center is correct or if his characterization of events is untrue. We have left a message for the ROC administrative staff to call us for comment, and we’ve been told they would. It will be interesting to hear their side of the story.

But how much would it comfort you, if you were a member of First Baptist Church Lavaca, to know that the men who have declared Ergun Caner exonerated have exonerated your new pastor? How much would it comfort you that the man who vouched for Ergun Caner to be hired at Brewton-Parker College (Johnny Hunt) also personally vouched for your new pastor? Would you be comforted that the man who investigated Darrell Gilyard and found him innocent, prior to his continued sexual assaults of even more victims has investigated your new pastor and vouched for him? Would you be comforted or think, “Uh oh…integrity problem.”

Perhaps men like Johnny Hunt and Paige Patterson should stop vouching for other pastor’s reputations when they have a terribly poor track record of doing so in the past. Perhaps the good ole’ boy network in the SBC needs to take a break for a while.

It’s worth asking, do Paige Patterson and Johnny Hunt even know Joe Donahue? Have they even met, or have they served with Donahue to give such glowing recommendations? Or is he simply the son-in-law of the spokesman and longtime defender of their other failed protege’, Ergun Caner? When Paul vouches for Epaphras in Colossians 4:13, he calls himself a witness of Epaphras’ labor. Is it wise to vouch for someone’s whose personal labor you have not personally witnessed? Can you really commend them in good faith and full integrity? Would it not be better to have one of the two-hundred supposedly “saved” people under his tenure at the Richmond Outreach Center vouch for his character? Or perhaps Jason Allen of Midwestern Seminary, under whom Donahue served as intern while at SBTS could have issued a recommendation. You know. People that actually know him and stuff.

The network of nepotism and cronyism in the SBC is easily as corrupt and dark as what’s prevailing in Southern politics. Before you vouch for someone, realize that your integrity and reputation is on the line if they fail or fall (especially, as with Patterson, it’s routine). Likewise, if you ask someone to vouch for you whose integrity and reputation has been wounded by habitually “exonerating” guilty people, perhaps you should think again.

Written by a Friend of the Blog, Posted by Dustin Germain

When You Can’t Trust Your Church Bookstore