This post will be in JD’s featured regular column, Discernment Review, in the Intermountain Christian News.

When I reviewed the Harry Potter Bible Study on the Intermountain Christian News, I didn’t give it a favorable review. The Bible Study written by Second Vice-President of the Southern Baptist Convention, Jared Moore, was (at least in my opinion) a contrived attempt at eisegeting Gospel themes where they weren’t present. I also thought that the book pandered unnecessarily to secular culture and bordered on sacrilegious, using a wizard as a type or shadow of Christ. When I had Moore on my radio program, he obviously disagreed.

Moore has written another book, “Ten Sacred Cows in Christianity that Need to be Tipped.” Unlike the aforementioned book, I would recommend both the premise and the content of “Ten Sacred Cows…”

As Moore explains in the preface, a “sacred cow” is a tradition that has been exalted to a position of normalcy without Biblical warrant. There are certain aspects of American evangelicalism that have a protected status. Some of these things are good things – although not necessarily Biblical things. Others used to be good things, but they’re no longer good things (no longer practical, beneficial, or pragmatic) and have become counter-productive to the church’s mission. These cows should be, as Moore writes, “tipped.” And for the reader that doesn’t know, “cow-tipping” is the rural joke perpetrated upon the city folks that come visit, getting them to try to tip cows over, based upon their ignorance of bovine science and naively believing that cows sleep standing up. I’m assuming the Intermountain Christian readership is in on the joke, but just in case…

Moore, as the title suggests, lines out ten sacred cows in need of consideration, and if necessary, termination. As though Moore put the list together in order of importance, the first cow he mentions is the cow I would most like to tip. Arguing that entertaining sermons often use Scripture as “the garnish” instead of the main point, Moore touches on an issue that is a major ingredience in the Modern Day Downgrade. We must get beyond our desire to be liked by the congregation for the wrong reasons. If we truly believe in the power, authority and sufficiency of Scripture, we have to understand that some of the most edifying sermons are often (although not always) the least entertaining.

The second sacred cow I would not only like to tip, but to butcher and barbeque. Moore speaks of the unfortunate trend in evangelical churches to “bribe” the lost to attend worship. It’s the “anything it takes” attitude that can often be found as a slogan for missions or church planting conferences. Does it defame the glory of God to entice the lost into the church? Moore argues that it does, and I agree. We see this tactic, more than any other, at Easter time (as Moore points out). One particular MegaChurch in Texas tries to give away bigger and better prizes each year, from flat screen televisions to luxury automobiles. The Christian Church (if indeed it is the true Church) offers freely each and every Sunday through the preaching of the Word the incredible gift of salvation and the forgiveness of sins through the blood of Jesus. It seems to profane that gift by enticing people to receive it by offering gifts made by mortal hands. There’s another word for that (it’s called “idolatry”). Some would say that if a single person gets saved because they showed up for the televisions, it’s worth it. The rest of us argue that God’s glory should be our highest priority and the Holy Spirit will save his people without the use of such man-centered tactics.

The sixth cow in Moore’s herd is relevant preaching. This may shock the reader considering that “relevant” is in the top three terms that the most “cutting edge” churches would use to desribe themselves and very little scrutiny has been given to this popular slogan. Upon close speculation, we have to encourage the pastor to realize that all of Scripture is relevant. Because it is all profitable for reproof, correction and training in righteousness, it’s literally impossible to find a passage of Scripture that is not “relevant.” A better distinguishing term would be “immediately practical.” We have to so value the Word of God as the means that the Holy Spirit uses to convict sinners and edify saints that we find immense importance in parts of the Scripture that can’t be used to give “three practical keys” or “five essential secrets” that people can put into immediate practice. Sometimes the best truths take weeks of cumulative glimpses into the heart of God, through Scripture, to understand.

“Ten Sacred Cows in Christianity that Need to be Tipped” isn’t the longest book and I don’t want to give away much more of it, lest you might get the general gist and not find a need to purchase the book. It’s a good one – and it’s not expensive. You can find it on Amazon and for just a few dollars, purchase it on Kindle. I’d like to see Moore use the book as a template for a more exhaustive thesis, because after all, these cows aren’t yet tipped. 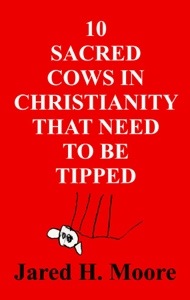 Sundays are for Sabbath Rest