Some of you might have noticed that The Gospel Coalition has made a hard left-turn in its pursuit of social justice. Just today, they posted an article about how to make the church a “safe space” for homosexuals. During the 2016 election TGC repeatedly ran articles promoting Hillary Clinton for president. They are espousers of “New Calvinism,” a Social Gospel religion that holds to soteriological Calvinism mixed with Kuyperian post-millennial, culture-conquering dominionism while denying most other tenets of what it means to be theologically Reformed. Although TGC has always been a New Calvinist organization, they have become increasingly brash in promoting political leftism, ever since adding former Democratic staffer, Russell Moore, to their board.

TGC posted an article today from Michael Wear. The article is entitled, “The Blind Spots of Identity (and Liberal) Politics.” The article is nothing short of advice to the Democratic Party on how to win their next bout of elections. It is campaign advice to Democrats on how to succeed politically. Wear’s article is a review of the book, The Once and Future Liberal: After Identity Politics, by professor, Mark Lilla. The point of Lilla’s book – who is himself a committed liberal – “makes the case that the Democrats lost because they’re beholden to identity politics” and “To win in the future, they need a politics of inclusion that appeals to shared identity and purpose.”

In the end, I agree with many of Lilla’s arguments and complaints about our current political discourse. Our politics is too tribal. Our politics would be better if it focused on ideas and the common good, rather than a gauntlet of special interest- and identity-based advocacy groups fighting for their piece of the pie. We ought to see our fates as inextricably linked with the fate of our neighbors—and act politically on their behalf. As we’ve seen, the difficult thing is to move the aspiration of these oughts into the reality of our politics and citizens’ lives.

Lilla is also right to dismiss progressive political rhetoric as ill-equipped to “convince the well-off that they have a permanent duty to the worse-off.” He acknowledges that the Bible “used to” provide this rhetoric, but now evangelicalism, in particular, has been “infected with the same individualism, selfishness, and superficiality that have infected other sectors of American life.” He accepts evangelicalism’s inadequacy and turns back to citizenship and national fraternity as the motivating source for his ideal liberal politics.

Wear goes on to hope that “liberal democracy” will use Christianity as its “fuel.”

So, who is this liberal who’s using TGC to advise the Democratic party on how to succeed in the future? Michael Wear was an Obama staffer. One of President Obama’s “ambassadors to America’s believers.” He directed faith outreach for President Obama’s historic 2012 re-election campaign. He also served in the White House faith-based initiative during President Obama’s first term, and he led evangelical outreach and helped shaped White House policy on religious issues, especially focusing on human trafficking (not murdering infants was apparently outside the scope of his work).

Wear wrote the article, “What Barack Obama’s Christianity Can Teach White Evangelicals” in the publication, Christian Today. He wrote that article just yesterday. In the article, he wrote…

Barack Obama’s outreach to evangelicals, as imperfect and burdened as it was by his policy views on issues of importance to them, reflected his knowledge that evangelicals are central to the future of this nation. While for decades other liberals have rushed to declare them irrelevant, Barack Obama’s repeated communications to them—his affirmations and his critiques—were all based on his audacious insistence that he had the right to speak to them. The right was his as a Christian, and as president of a nation where they represent more than a quarter of the electorate and are primary stakeholders in its future.

The inward turn of many white evangelicals was evident in how they received Barack Obama’s outreach. Instead of fully weighing his words, they were prodded by talking heads and right-wing leaders to retreat into themselves. Who is this pro-choice, same-sex marriage affirming president to lecture us on the meaning of Christianity?What right did Barack Obama have to be disappointed in us? It was easy to dismiss Obama when, in their eyes, his Administration was abhorrently mistaken on key issues of human dignity and morality. When you feel like you’re losing, critiques often sound like attacks.
Evangelicals may find such attention as they received from Barack Obama more hard to come by after the Trump era takes its full toll. In years to come, I believe evangelicals will view Barack Obama’s disappointment toward them in a different light. They will see that it reflected much higher esteem than either Hillary Clinton’s cold disregard or Donald Trump’s toxic embrace. As they acclimate to the cultural changes that drove them to Trump, and understand just what their support of Trump cost them and our country, they will look back and see that Obama’s disappointment was a compliment.

So now THIS GUY is writing for The Gospel Coalition. What in the world are they smoking over there?

Oh, yeah. Liberalism. They’re smoking liberalism. It’s cultural progressivism on parade at The “Gospel” Coalition, and they are a tool of the American Left. It’s not as though TGC doesn’t know who Wear is. In an article entitled “The Case for Hope From a Former Obama Staffer” they write…

But there are thousands who can say the same; the church and the nation don’t need more of them. Wear—who worked for Barack Obama as a White House staffer and re-election campaign official—is what we need more of.

It’s time for Christians with a Biblical worldview to throw New Calvinism and the Social Gospel Coalition in the trash where they belong.

A Gallery Of The Faithful Gathering For Church Amid Pandemic. Album Eighteen 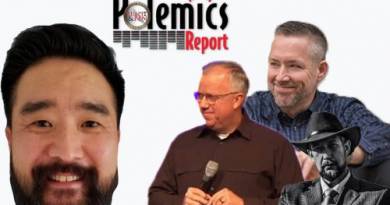