You might be familiar with the heresy of Docetism, which is listed as a heresy and written about by Polemics Report.
The heresy of Docetism is named for the transliteration of the Greek δοκεῖν/δόκησις, meaning “phantom” or “illusion.” The word refers to the 2nd Century AD teaching that Jesus only seemed to be human, and that his flesh was only an illusion. The earliest signs of Docetism appear in a pseudepigraphal work (a book purporting to be Scripture, but with an unknown author and falsely attributed to someone else), the Gospel of Peter. Docetism was rejected as heresy at the Council of Nicaea (AD 325).
There is, however, another sub-christian teaching (it may or may not rise to the level of heresy, depending upon the extent it is held by the adherents) called Ecclesiastical Docetism.

As best as we can tell, the term was coined by Karl Barth (Church Dogmatics, IV/1:653-54) and he defines it as “the denial of the church’s worldly and human reality.” Barth writes…

Ecclesiastical Docetism…tries to overlook the visibility of the church, explaining away its earthly and historical form as something indifferent, or angrily negating it, or treating it only as a necessary evil, in order to magnify an invisible fellowship (link)…

Wallace Alston also discusses Ecclesiastical Docetism in his book, The Church of the Living God: A Reformed Perspective. Wallace takes exception with Swisse theologian Emil Brunner, who he quotes as saying…

“The New Testament Ecclesia, the fellowship of Jesus Christ, is a pure communion of persons and has nothing of the character of an institution about it.”

Wallace, in response to this claim (which is similarly held by Sectarian Minimalists) argues quite the opposite, that the very humanity of the church is obscured when the church is defined as pure communion with nothing of the charter of an institution about it.  He writes that, “the human nature of the church is lost whenever the church is uncritically equated with the Kingdom of God.”
Wallace calls this claim – that the church is not a local institution – ecclesiastical docetism, in the same way Barth used the term to refer to those who discount the establishment of the church in its physical, visible and local form.

Adherents of Ecclesiastical Docetism include groups that deny the validity of the local church, or who argue that all the various Christian “fellowships” include only one local church, but in various localities (as counterintuitive as that seems). Typically, adherents seem strongly influenced by the same ideas espoused by the book, Pagan Christianity, by Sectarian Minimalists and include the founders of Abolish Human Abortion (AHA), recently by Reconstructionists like Bojidar Marinov (pictured above) and Bill Evans (note: many Reconstructionists do not adhere to Ecclesiastical Docetism, as illustrated in this article by Rick Appleton) and many others of various anti-church strains within professing Christendom.

We Are Still Protesting Podcast: All About Charismania 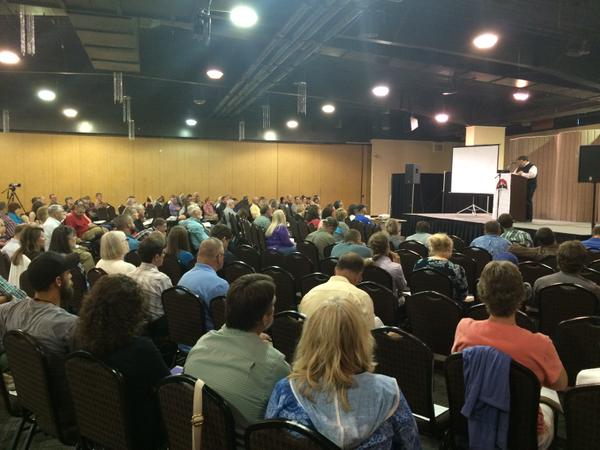