“By any means necessary.” The Nation of Domination

On August 2, 1992, native Georgian and former NFL football player turned pro-wrestler Ron Simmons made history by defeating Big Van Vader to become the first ever black WCW heavyweight champion.   Simmons would go on to enjoy a long career in Pro Wrestler, eventually being inducted into the WWE Hall of Fame.  Throughout his career, Simmons used a number of gimmicks to get over with the crowd.  One of his more memorable gimmicks was a character named Farooq Asaad who led a stable known as the “Nation of Domination.”  The Nation of Domination consisted of (mostly) minority wrestlers who dressed in African-themed attire.  The group operated with a Black Power theme and was an obvious satire of the very real Nation of Islam.  In reality, the group consisted of professional entertainers pretending to be something they were not for the sake of entertainment.  “Farooq Asaad” was really an American Southerner named Ron Simmons.

In 1988, a native North Carolinian named Ron Burns was a freshman in college.   It was then that Burns first encountered members of the Muslim faith.  Shortly thereafter, he converted to Islam.  Burns grew up in a nominally Christian home as the youngest of eight children born to a mother who never married.  He was the only child of his mother and his father.  When he was thirteen years old, his father left his family; Burns did not have much of relationship with his father after that.  Like so many youths who grow up fatherless in broken homes, Burns became an angry man.  He began reading the literature of ’60s radicals, which was given to him by a high school teacher. According to Burns, this was like “giving fire to a pyromaniac.” Burns was drawn to Islam by what he has called “black nationalist ideology.” He resolved to commit to “black nationalist causes, the building of black businesses, the development of black communities.”  Part of this commitment was changing his name to the very African-sounding “Thabiti Anyabwile” which is a combination of a Swahili term for “a true man and upright” and an Arabic term that means “God has set me free.”  After college Thabiti Anyabwile got married and took a job as a community organizer at a non-profit.  He was a respected man at work and in his community but something wasn’t right with his life…Islam.  Anyabwile after wrestling with his faith came to reject Islam and embrace Christianity.  However, even after having become a professional Christian minister, Anyabwile has kept his Black Nationalist Muslim name.   Thabiti Anyabwile markets himself as a something of an expert in the black community and the African American church, going as to author a book entitled The Decline of African American Theology: From Biblical Faith to Cultural Captivity.  Perhaps this is why he has kept his “blacker” name.  Yet, Thabiti Anyabwile is no more Muslim or African than Farooq Asaad.   Christianity is a religion that is supposed to overcome all ethnic barriers, making its adherents one nation in God’s church.  Yet, Ron Burns of the American South (a Christian pastor) seems to still strongly identify with black nationalism and a radical social justice ideal.

Ron Burns is currently the Pastor of Anacostia River Church in Washington, DC.  In his professional capacity as a minister, he has been a strong advocate of the racial reconciliation movement pushed by the Ethics and Religious Liberties Commission (ERLC). Burns, sounding more like a liberation theologian than an orthodox Chrisitan, has spoken of Police officers as our enemies.  He was included in a panel of other black social justice advocates, most of whom openly reject Christ, as co-belligerents in the black social justice agenda. In an article he wrote at The Gospel Coalition, he said the following,

It’s like the man who wrote to lecture me on the scripture, how it never commands God’s people to protest or organize or march. He tells me Christianity is completely unconcerned about such things. He claims to be “orthodox” and charges me with careening off some “liberal” cliff into the abyss of the “social gospel.”

This man is blind. He means well, no doubt. But he doesn’t see how he not only removes the Scripture from real life concern, but also abandons his own “orthodox” view of the Bible. In a more abstract context he would tell me the Bible is sufficient…But in the actual world in which we live, he thinks the Bible has nothing to say about dead unarmed men, about our duty to show mercy, and the blessing of rulers who rule righteously or the prophet’s constant challenge to power…And this is why Evangelicalism—safe far away from the cliff of “liberal” theology—has backed its heels onto the opposite cliff of complete irrelevance to the residents of Ferguson, who want to know if God remembers them, loves them, or cares about them at all. Does God the Judge answer the cries of the disenfranchised, the poor, the weak, the fatherless? Is there a hope of justice for mothers and fathers bereft of their children playing in the park, or husbands and fathers choked to death on city sidewalks? Have we no answer for them?

Thabiti Anyabwile is a name that is representative of a false religion and the false god that supposedly set Ron Burns free.  Tragically, Burns does not appear free of his preoccupation with the culture and prosperity of a specific race. He seems to be holding on to some part of his unchristian past.  In a book titled Reviving the Black Church, Burns writes,

I left the Black Church of my youth and converted to Islam during college. I became zealous for Islam and a staunch critic of the Black Church. I welcomed much of the criticisms of radicals, Afrocentrists, and groups like the Nation of Islam. I cut my teeth on the writing and speaking of men like Molefi Kete Asante, Na’im Akbar, Wade Noble, Louis Farrakhan. The institution that helped nurture me I now deem a real enemy to the progress of African Americans, an opiate and tool of white supremacy. I had experienced enough of the church’s weakness to reject her altogether. The immature and undiscerning rarely know how to handle the failures of its heroes, to evaluate with nuance and critical appreciation. That was true of me before the Lord saved me.

Burns may be saved but he clearly still holds to some kind of black nationalist identify.  This is evident in one of his latest conversations on Twitter. Recently, he was asked who he thought would be a good candidate for the African American vote. His reply, “Bernie Sanders….presuming their interests and needs.”  For Burns, Bernie Sanders’ socialist platform is best for black people.  Furthermore, the answer to his question presumes that one candidate is better for one race of Americans than another.

Unfortunately, Bernie Sanders, who supports the #blacklivesmatter movement, is staunchly pro-choice and even opposes bans on partial-birth abortions. Why would a Black Christian leader (or any Christian, really) support a candidate that opposes bans on abortion–the number one killer of African Americans? Shouldn’t that disqualify him as a contender for any Christian’s vote?

Apparently, the slaughter of innocent lives isn’t a priority for African Americans “interests and needs,” according to Burns. In a later tweet, he said,

Yet, the racist #blacklivesmatter movement, riddled with anti-Christian sentiment, racism, and even gay activism, seems to be on his primary agenda. Interestingly enough, some of the Evangelical Intelligentsia (EI) have even called him out on his remarks. Joe Carter and Denny Burk had the following responses to Ron Burns. 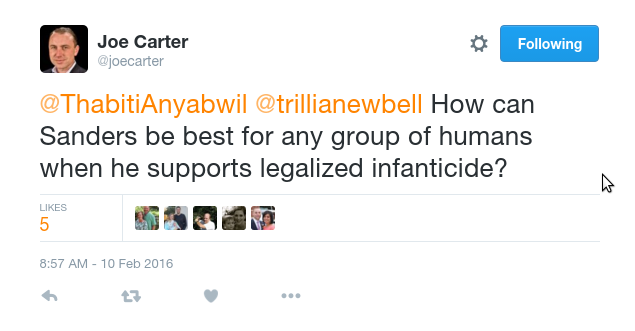 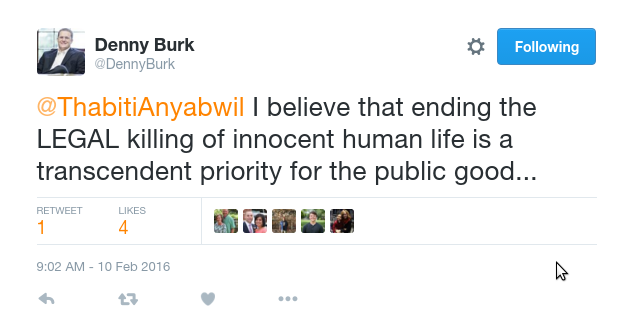 The Pulpit & Pen would have to agree with them on this one. Thabiti has completely gone off the rails on this one. While being such an outspoken voice in the fight for so-called racial reconciliation, #blacklivesmatter, and social justice, he has completely lost track of real issues. If Burns really cares about black lives–or all lives for that matter–he’ll be protesting the number one killer of African Americans, abortion, instead of causing dissension by protesting police and advocating socialist political candidates like Bernie Sanders as the best choice for Black voters.

Will the real Ron Burns please stand up?

Qualification For Hillsong Youth Pastors: Be A Hot Model…

NOBTS and the Bernie Sanders Generation