In the wake of the antichrist’s visit to the US a few weeks ago, well know Fox News contributor, Kirsten Powers, announced she had left Tim Keller’s Presbyterian church in favor of Roman Catholicism. Announcing her conversion on live television, she told her viewers, “tomorrow night at 7 o’clock, I’m becoming Catholic!” It was widely speculated that her former pastor, Tim Keller’s, promotion of Catholic mysticism and weak teaching on the Gospel and authority of Scripture played a major role in her decision to leave that church.

But any true Protestant who believes the Bible is absolute truth would know that you can’t be both Roman Catholic, and Christian. In other words, you cannot believe Roman Catholic doctrine, and be saved, as RC doctrine anathematizes anyone who believes in the biblical doctrine of salvation by grace alone, through faith alone.

Yet, Dan Darling, Vice President of Communications for the Ethics and Religious Liberties Commission of the Southern Baptist Convention praises the absurd testimony of “becoming a Christian” by Kirsten Powers. 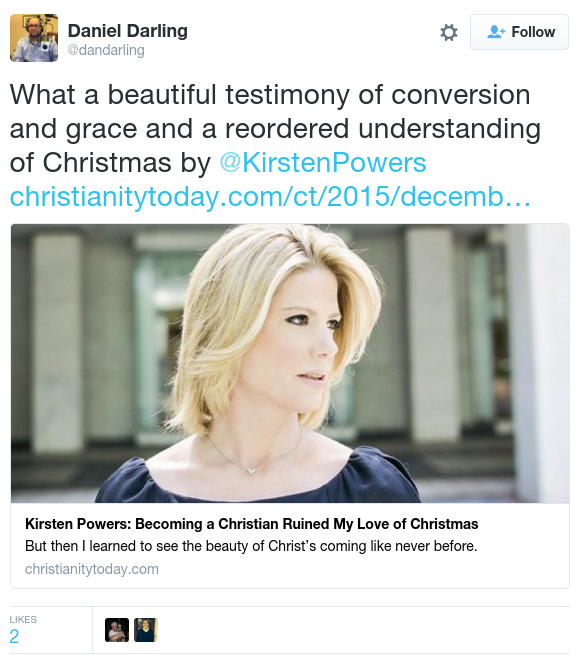 In this testimony, posted on Christianity Today, Kirsten speaks of a conversation she had with her boyfriend before her time of “conversion.” She says,

A few months into the relationship he confronted me with a question I didn’t expect to get from any person I knew: “Do you accept Jesus Christ as your Savior?”

“Of course not!” I answered. It was ridiculous. Who says things like this? I wondered.

My boyfriend then explained that he saw a future for us, but that he couldn’t marry someone who didn’t accept Jesus as their Savior. But then he told me something that I had never heard: “If you can keep an open mind,” he said, “God can reveal Himself to you.”

Well, apparently she kept an open mind alright, as she explains how she came to “accept Jesus into her heart.”

Shortly after arriving at that conclusion, I went on a business trip to Taiwan. During the travel I prayed fervently that God would reveal Himself to me, though I didn’t really understand what I was asking for. And then one morning I awoke from a dream in which Jesus had come to me and said, “Here I am.” I was overwhelmed and frightened because the experience was so real.

So, Dan Darling is praising the conversion of an ex-Presbyterian-turned-Roman Catholic, who kept an open mind, and came to know Christ through a dream.

My Bible says “So faith comes from hearing, and hearing through the word of Christ.” (Romans 1:17)

But the ERLC’s ecumenical shenanigans continue.