A couple months ago, a kerfuffle between Hillsong NYC’s Carl Lentz and various blogs outing the church’s mishandling of two celebrity sodomites, known as the “Broadway Boyfriends,” who are members of his church, including one who had served as choir director. The openly gay Hillsong church members, Josh Canfield and Reed Kelly, told the press back in January 2015 that they had “come out” to Hillsong leadership and that “nothing had changed” since in their relationship to the church since then, thus giving the impression that Hillsong NYC and Carl Lentz approved of their lifestyle. Though Lentz denied the accusations of accommodating an openly gay couple in his congregation, this claim was thoroughly debunked.

Now that the brouhaha has died down, the couple appears to be back it again–only this time, in Los Angeles. 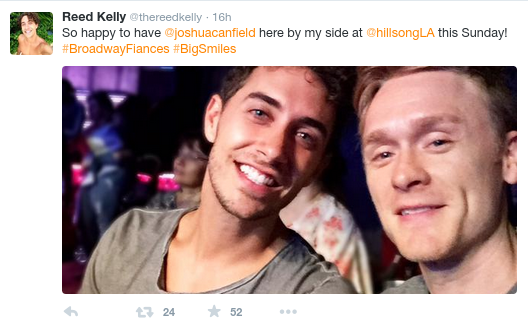 Senior pastor of Hillsong Church had this to say in response to the criticism of allowing the openly gay couple to hold a leadership position at its NYC campus,

I do believe God’s word is clear that marriage is between a man and a woman. The writings of the apostle Paul in scripture on the subject of homosexuality are also clear…So if you are gay, are you welcome at Hillsong Church? Of course! You are welcome to attend, worship with us, and participate as a congregation member with the assurance that you are personally included and accepted within our community.

So, while he says he believes homosexuality to be sinful he’s totally fine with homosexuals being active, vibrant members of the church, so long as they don’t hold a “leadership position.” But church membership is reserved for those who are born-again believers and are expected to act as functioning members of the body of Christ. Church members are expected to give and to support their local church, and to serve and proclaim the Gospel of Jesus Christ. By default, being a Church member is in and of itself, a leadership position.

However, Brian Houston is actively encouraging unrepentant sinners, pagans, to participate in worshiping God. This is unbiblical, as Scripture says in John 4:24 “God is a Spirit: and they that worship him must worship him in spirit and in truth.” But unrepentant sinners do not worship in spirit and in truth. God will reject any form of worship from pagans like Reed Kelly and Josh Canfield. 1 Corinthians 10:20 says that their sacrifices of praise are offered to demons, and not to God. Therefore, why would Houston want to invite them to worship with them? Why, if you truly are a loving, bible-believing pastor, would you want to give them the false assurance that they are personally included and accepted in the body of Christ?

Hillsong LA’s lead pastor, Ben Houston, son of Senior Pastor, Brian Houston, has been largely silent on the issue. But now that Kelly and Canfield are attending his campus, will have anything to say on the subject?

The Charismatic Art of Quenching the Spirit

Salt Mining with Thabiti Anyabwile – Are You Guys Even Christians?