Lifeway – a Southern Baptist entity – will soon have their (arguably) most prominent executive speak at a Muslim-Evangelical interfaith event. Ed Stetzer, Vice President of Lifeway Insights Division and executive director of Lifeway Research, will speak at the upcoming Spreading Peace Convocation. The Convocation is a gathering of Christian pastors and Islamic imams, and is designed – according to their website – to “learn how to relate” and “build bridges” between the various religions.

The Spreading Peace Convocation is co-sponsored by Glocal, a syncretistic “muti-faith” organization that desires to bring together Christians and Muslims for cooperation on social justice and humanitarian issues. Glocal’s twitter account can give you good insight into the organization’s goals and “vibe” that seems more similar to the Huffington Post religion column than anything resembling the Southern Baptist Convention. Retweeting Barrack Obama on race relations, tweeting photographs of pastors and imams bowing their head in prayer together (as though they were praying to the same God) and joint statements from events like the Spreading Peace Convocation between pastors and imams asserting all their religious similarities is the basic gist of what Glocal is about. 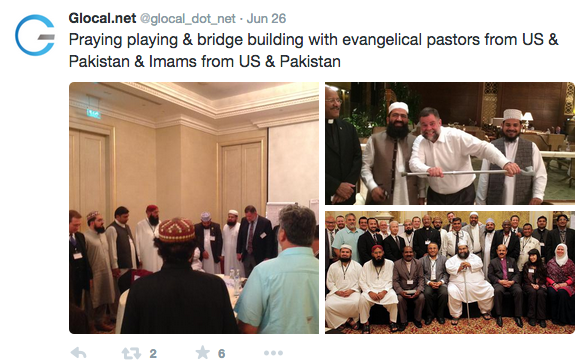 The event is also co-sponsored by the International Interfaith Peace Corps, an Islamic organization (began with funding through the globalist Bill and Malinda Gates Foundation) whose goal is to, “to promote and reward interfaith work in order to bridge the gap between different religious cultures through tolerance, respect and understanding.” The organization, which was initially started to confront Islamic prejudices toward vaccination, has now been “reaching out” to “build bridges” between Christians and Muslims. Their last blog post was celebrating the Muslim call to prayer being given at the National Cathedral in Washington, D.C.

Of false teachers, Paul warns the church in Ephesus of their promiscuous services, working for anyone who can pay…

But these, like irrational animals, creatures of instinct, born to be caught and destroyed, blaspheming about matters of which they are ignorant, will also be destroyed in their destruction, suffering wrong as the wage for their wrongdoing. They count it pleasure to revel in the daytime. They are blots and blemishes, reveling in their deceptions, while they feast with you. They have eyes full of adultery, insatiable for sin. They entice unsteady souls. They have hearts trained in greed. Accursed children! Forsaking the right way, they have gone astray. They have followed the way of Balaam, the son of Beor, who loved gain from wrongdoing… (2 Peter 2:12-15 ESV)

Balaam’s great sin was working for whoever would pay him. If you could explain why this Southern Baptist employee would be speaking at this event of God-hating people for any reason other than a paycheck, let me know.

Finally, let me remind you of the Scripture’s teaching...

Do not be unequally yoked with unbelievers. For what partnership has righteousness with lawlessness? Or what fellowship has light with darkness? What accord has Christ with Belial? Or what portion does a believer share with an unbeliever? What agreement has the temple of God with idols? For we are the temple of the living God; as God said, “I will make my dwelling among them and walk among them, and I will be their God, and they shall be my people. Therefore go out from their midst, and be separate from them, says the Lord, and touch no unclean thing… (2 Corinthians 6:14-18 ESV)