In relation to the revelation that a homosexual couple had been involved in their music ministry – one a choir director, the other a choir member – (source link) and according to them “nothing has changed” (source link) since they revealed their homosexuality to Hillsong NYC, Brian Houston made some grossly contradictory statements to the press (source link).

Keep in mind, this contradicts the initial press story and the words of the homosexual that “nothing had changed” (source link – and if the screenshot below is too small, just click it and it will take you to the source).

So, it’s Houston’s word versus the homosexual’s word. Okay. But consider this…

Online sources reveal the CBS show, Survivor, (in which they were filmed as a couple) filmed well before the above cited statement to the press (source link). Did Hillsong NYC leadership not know their choir director and his lover were starring in a reality show as a couple? Like, nobody knew that? 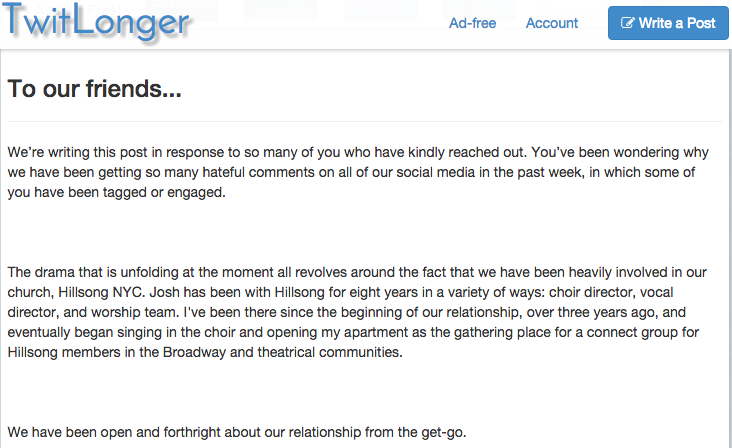 One had been a member at Hillsong for 8 years. Another one had been involved for 3. According to them (who both signed the letter), they were “open and forthright about [their] relationship from the get-go” (source link).

Pleeeeease. Tell me again about how “Lentz has dealt with this.” And tell me that Houston is anything but confused (best case) or outright lying (worst case). From what we can see, the facts seem to be:

Wake up, folks. Here’s a tip…don’t believe what false teachers tell you – especially if it’s in a whisper or a dollar short and day late.

Masturbatory Worship and the Contemporary Church