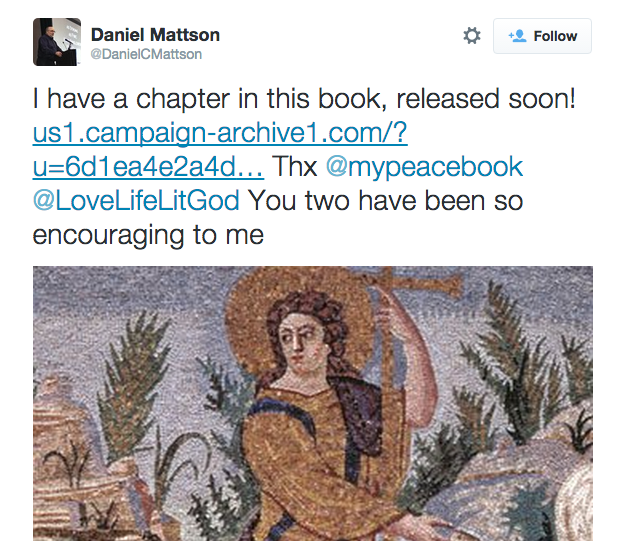 If you click the large pic above, you’ll see it take you to where it’s posted at Ignatius Press. Underneath it, you’ll see the following advertisement.

The individual who is congratulated by Karen Swallow Prior is Dan Mattsen, whose chapter is in the above book. Mattsen’s Catholicism (and same-sex attraction) is highlighted in the film, Desire of the Everlasting Hills, which was played at the pro-LGBT film festival, Level Ground. Level Ground was started by a homosexual woman,Chelasea McInturff, and her ‘straight’ friend, Samantha Curley, an advocate for LBGT rights, to learn how to “share communion without sharing convictions” and how to discuss “the harmful effects of marginalizing gays in the name of religion” and “to reconcile and find common ground without judgment” (source link).

I snatched this screen-capture from the movie, and thought this short clip summed up the film pretty well…

Works-Righteousness. That’s the overall tone of the film. It doesn’t produce a Gospel solution to a sin problem.

The film, for which Karen Swallow Prior sat as a panelist at Level Ground, is a propaganda piece for New Evangelism’s Catholic’s Come Home. Essentially, the theme of the film is:

In the entire film, there’s not a reference to repentance, sin or any semblance of the Gospel unless its of the type that is found in the Catholic confessional booth. The film repeatedly hits upon the theme, “this is not what is best for you…come to the Catholic Church.” All three individuals highlighted by the film found the answer to their destroyed lives not in penitent faith in Jesus Christ or repentance of sin (except for a brief mention to the confessional booth) but in going back to the Roman Catholic Church (you can find the entire film here).

How does Dan Mattsen, who was encouraged by Karen Swallow Prior and whom she congratulates for having a chapter in a Catholic book, think we should be evangelizing homosexuals? From an interview in Legatus Magazine:

Nah, don’t preach about the immorality of homosexual acts. Nooooo. You don’t change people’s minds with that. Instead, refer to homosexuality by something along the lines of it being “not the gold standard of human sexuality” as Karen Swallow Prior has done. Diminish the “sin talk.” That doesn’t help, says the man who turned to the Roman Catholic Church to have a happier, better life. And I think he’s right. One can certainly see how Karen Swallow Prior has been such an encouragement to him.

Where should you turn? Turn to EnCourage, the support arm of the apostolate.

What’s entirely missing from the object of Karen Swallow Prior’s encouragement – or his entire body of publicized work, so far as I can tell – is the acknowledgement that same-sex attraction, acted upon or not, is sin of the heart and should be repented for. Also missing is the notion that one can be born again with a new nature, and place their trust in a dead and resurrected savior for the forgiveness of their sins. Of course, this is Catholic propaganda, so we shouldn’t expect anything different. The answer for Mattsen is, of course, the church – and not the Gospel. Mattsen again explains that we don’t need to evangelize homosexuals, so much as just be there for them and love on them…

Oscar Wilde, to whom he refers, was a homosexual with a penchant for pubescent boys who understood the Catholic priest’s questioning on his deathbed just barely well enough to raise his hand in agreement to receive the “sacrament” of Divine Unction. Yes, quite a turn around Wilde had. Don’t hold your breath on seeing him in Heaven. Clearly, we (evangelicals and Catholics) don’t agree on what constitutes “conversion.” We speak of conversion unto Christ. They speak of conversion unto the church.

Karen Swallow Prior has repeatedly said things like the following (source link):

“As a matter of fact, unlike my opposition to capital punishment, which is rooted in Christian mercy, my opposition to abortion—under any circumstances except those rare times when it is necessary to save the life of the mother—is rooted in social justice, not Christian belief. Although my Christian faith compels me to act in accordance to that sense of social justice, it is not the origin of my pro-life ethic.”

In fact, there are a number of video clips out there in which she says this very thing about various social issues. Prior is very, very convicted that she should inform us that her worldview doesn’t come from the Bible, but from greater truths and a moral imagination that supercedes religion (and more on how Prior’s fixation on “moral imagination” undergirds her social progressivism in a later episode of P&PP).

Entirely neglecting 1 Corinthians 5 when it comes to behavior toward those who’ve taken the name of Christian while engaging in unrepentant sexual behaviors and leading an army of homosexual fans and defenders is one thing (and it’s a bad thing), but leavening with influence how we speak and engage on this topic is something else altogether.

Christians have got to figure out that it’s not only the problem (homosexuality – or sin, in general) we should be concerned about, but the solution. Heaven hath no victory and hell no more vacancy because someone leaves homosexuality and enters an anti-Christ church. Sin cannot be a solution to sin. The Gospel is the solution to sin, and frankly, when you cut through all the nuance and muddying dialogue, you’re left with little talk of sin and virtually no talk of Gospel.

And if the homosexual community applauds it…take a hint.