Joni Hannigan has repeatedly been used by certain individuals in the Jerry Vines/Connect 316 wing (for lack of a better term) of the SBC to post propaganda at the Christian Examiner in the name of “journalism.” Repeatedly, Hannigan does not do her research. We pointed this out in the first post last week, in response to her online article lamenting bloggers “bullying” the SBC Pastor’s Conference into uninviting Seventh Day Adventist and anhilationist, Ben Carson, from speaking. This isn’t the first time Hannigan has resorted to the “bullying” charge, saying essentially the same of Pulpit & Pen contributor (prior to him being a contributor), Seth Dunn, last Fall. To defend Hannigan, Caner’s former spokesman, Peter Lumpkins, put up a post on his blog, Synergism Tomorrow, accusing P&P of “character assassination” for pointing out that Hannigan repeatedly doesn’t check her facts and does so for the political advantage of a certain wing of the SBC.

Ironically, we received an email from a pastor who believes himself bullied by Joni Hannigan. A tweet that, if sent to her in reverse, would probably result in a call to the authorities. And then, a midnight voicemail to his office, warning him about his tweet to her. Not only is Hannigan’s behavior unhinged, but it’s much worse than what she’s accused “Baptist bloggers” of doing. We wonder if anyone offered to “send someone to his church to assist” Willy Rice (the SBC Pastor’s Conference organizer) or left angry voicemails at midnight with nefarious cautions about how to publicly respond (or not) to him.

Last week, P&P posted an article regarding the “Calvinist Boogeyman” which among other things, critiqued the journalism of Joni Hannigan. I replied, jokingly, on twitter regarding the article, as a means to convey my appreciation to the P&P guys. A few hours later, I received a rather odd reply on twitter to my comment: 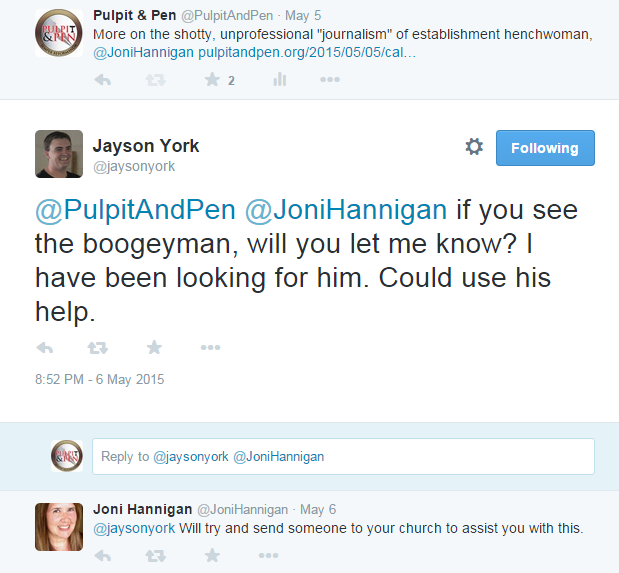 …and then a voicemail message was left here at my church on our general voicemail inbox, by Joni Hannigan.

Her voicemail was beyond what the words odd, strange, and bizarre can convey. She repeatedly (3 or more times) insisted that I no longer “leave messages on her twitter”, and she also stated “you should stop putting things on my twitter, because you do not know me.”

Well, she is right, I do not know her. As a matter of fact, until the article on P&P, I had never even heard of her. But, what I do know is that she doesn’t know me either, which is what makes this whole thing so bizarre, and even a little scary.

The original article on P&P was about the poor journalistic efforts made by Mrs. Hannigan and how she blamed Calvinism, or the “Calvinist Boogeyman” as Seth wrote, for the SBC’s change of heart regarding Ben Carson. An article such as that has its sides to be taken, to be sure, but it was also done with the intent of showing how so often Calvinism is blamed anytime someone comes against the establishment of the SBC.

As a follower of P&P, especially since the days of #the15 and another attempt to blame Calvinism in the wake of a careless tweet by John Piper, I appreciated the article, both for its content, but also because I know the usage of the Calvinist Boogeyman all too well. I have seen “misunderstood Calvinism” used many times in an attempt to silence anyone who disagrees with progressive, liberal theology.

So when I listened to the voicemail for the first time, I was shocked at what seemed to be lack of self control by someone who claims to want to put an end to bullying.

The most recent post in Mrs. Hannigan’s own blog (albeit from 2014) is about the tragedy of someone who took their life because of being bullied on social media. Which makes it so ironic is that she didn’t speak in the message as someone who was trying to convey being offended by the content of my tweet, (which would have been impossible because it wasn’t the least bit offensive) but rather

…she spoke as someone determined to silence a perceived critic, regardless of context or connection. She spoke more as a bully herself than a peacemaker.

The bizarre nature of this whole scenario can’t be conveyed enough. Who does this? Who calls at midnight to threaten a pastor because of a tweet directed at a discernment blog written about poor journalism? I will say this, she certainly got one part right: I don’t know her. But the part I do know, scares me.

As a pastor, I came to follow P&P because it is a group of pastors writing about issues all pastor’s face from time to time. I never imagined the person they wrote about would find their way into my church and threaten me, simply because I found their writing helpful. But here we are, and thus another example of why P&P is so needed.

How To Be Mad at Your Pastor

World Vision Shennanigans and the Missapropriation of Prayer