“I think the decision to disinvite (Ben Carson from the SBC Pastors Conference) is sad and more importantly wrong.” David Uth

“The point about the Carson controversy is not what individual evangelicals choose to do in the voting booth. It is that events like the Southern Baptist Pastors’ Conference need to be campaign-free zones. We’ve got more important Kingdom business that urgently needs attention.” Thomas S. Kidd.

“Carson may be a stalwart defender of religious liberty, but an orthodox Christian he is not.” JD Hall

On June 1, 2014, The Lord’s Day, Ben Carson[1] made a personal appearance at a Barnes and Noble Bookstore in the Orlando area.  According to a local news organization, “Ben Carson drew a packed house with the book store’s parking lot taking on a circus-like atmosphere.  There were signs urging, “Run Ben Run,” and a petition was being passed for a 2016 presidential run. There were tents and RVs.”  On that same day, Carson addressed the congregation of First Baptist Church of Orlando from the pulpit of that church.  That pulpit is normally filled by the church’s Senior Pastor, Dr. David Uth.   On June 1, 2014, David Uth filled the pulpit of his Baptist Church with a Seventh Day Adventist who, as it is now known, has been planning a run for the Presidency of the United States.  Ben Carson, along with David Uth, was later invited to speak at the 2015 SBC Pastor’s conference.  Carson, amidst concerned objections from Southern Baptists, was disinvited.  Some argued that it was not appropriate for a political candidate to speak at a pastor’s conference.  Others argued that it was not appropriate for a Seventh Day Adventist[2] to speak at a Southern Baptist Conference.  Both arguments implicitly rebuke and condemn the actions of David Uth and the leadership of First Baptist Church of Orlando, for, if it is inappropriate to invite a cultist political candidate to speak at a denominational pastor’s conference, it is certainly inappropriate to invite him to preach at a local church.  Yet, that’s exactly what David Uth did on June 1, 2014.

Not long after Florida Baptist Journalist, Joni Hannigan, penned a critique of what she labeled as “bullying” tactics used by Baptist bloggers to pressure Willy Rice, SBC Pastors Conference President, to rescind Carson’s invitation at the Christian Examiner website, David Uth penned a piece of his own[3] addressing the Carson affair.  As RC of Psalm 12 Outreach has noted, Uth’s real problem is that “that the decision to drop Carson makes him look bad.” Uth, in criticizing the decision to rescind Carson’s invitation is essentially making his own defense.  The invitation that Uth extended to Carson escaped widespread notice in Southern Baptist circles because it was done at the local church level. [4]  Now that the Carson affair has made national news in both faith-based and secular publications, Uth’s decision to invite Carson to fill his pulpit has been exposed to the light of day.  This does not bode well of Uth, who garnered enough respect to be invited to speak at the Pastor’s Conference himself.  As the pastor of a multi-million dollar megachurch with 4,350 stadium seats, Uth possess a stature similar to pastors who are typically elected to the presidency of the Southern Baptist Convention.  With the bad press Uth is receiving from the Carson affair, any political aspirations Uth had in the SBC may be dashed against the Rocks.

Old News to Me

I wish I could say that I was shocked to hear that a Seventh Day Adventist was invited to the SBC Pastor’s conference but I wasn’t.  The first place I ever saw Carson’s book was at a register display at a Lifeway store.  Carson’s book was displayed along with Phil Robertson’s Happy Happy Happy in a high traffic area.  Instantly, I recognized a Seventh Day Adventist and a Church of Christ[5] author were being heavily marketed in a Southern Baptist bookstore.  I was disappointed but unsurprised.   Many conservative-minded American Christians, I understood, cared more about the politics of Carson and Robertson that their theology.  This attitude is all too typical of American evangelicals.  The focus is not on the kingdom of God but on the state of America as reported by Fox News and reported by “news” pundits who are paid to pander to their cable news audience.  (Read the gospels, you’ll notice that Jesus hardly pandered).   This attitude is evidenced by book sales and Fox News ratings.  This attitude also manifests itself each year in megachurch July 4 celebrations that seem to honor the USA along with God in some sort or nationalist Christian syncretism[6].  For example, here in Georgia, MegaChurch Roswell Street Baptist Church shoots confetti out of a canon during its 4th of July Service.  I once heard former Georgia Governor Sonny Perdue preach at a First Baptist Woodstock July 4th Service.  Megachurch pastors know that they have to put butts in the seats in order to pay the overhead on their massive church campuses.  Political figures, Christian or not, do fill the seats well.  At First Baptist Orlando, Ben Carson received a standing ovation before he so much as opened his mouth to speak from the pulpit.  Make no mistake, Uth did not act outside of the wants and desires of his congregation.  Political concerns can be number one in megachurch culture, right after money.

While it escaped national noticed when Carson was invited to First Baptist Orlando, it did not escape mine.  In May of 2014, I had a twitter interaction with Jeff McLaughlin, an associate pastor at the church.  I expressed the same concern expressed by others about the appropriateness of an invitation to Carson.  All that remains of this twitter interaction is my side of the conversation, which is shown below.  McLaughlin’s twitter account has since been deleted. 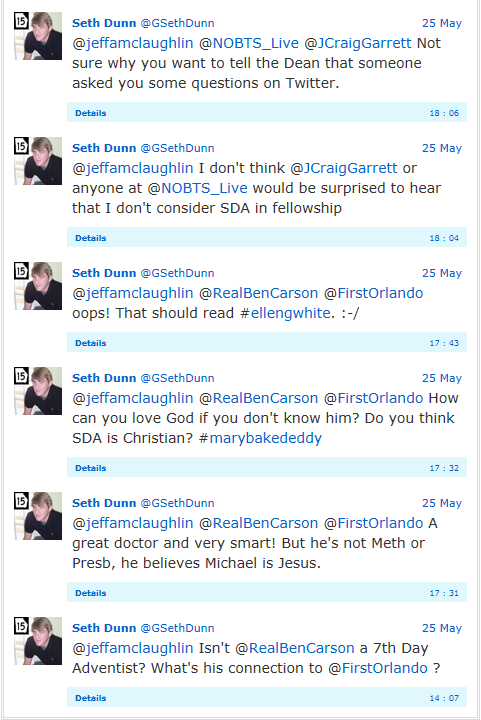 A quick Google search of McLaughlin showed that he had a busy month of defending error in May of 2014.  In a comment at FBCJAX Watchdog, McLaughlin objected to a critique of Perry Noble’s claim that “maybe there would be less homosexuality in the world today if there were less greedy Christians who actually cared enough to tithe and spread the gospel.” Megachurch pastor Perry Noble objected to Carson’s disinvitation as well. 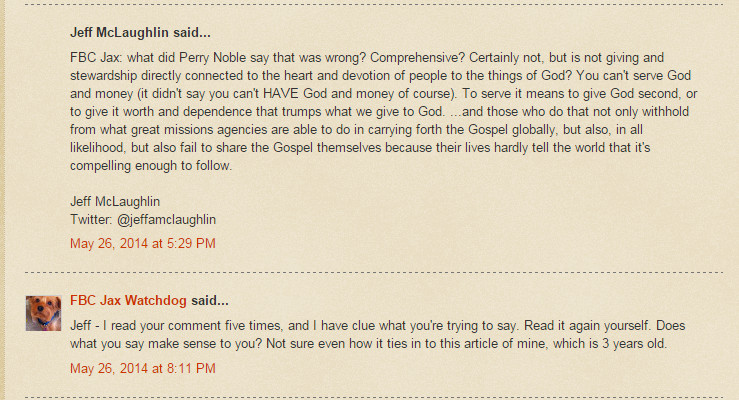 After Ben Carson famously criticized Barack Obama and US tax policy at the National Prayer breakfast,[7] he was investigated by the IRS.  That hardly seems like a peculiar coincidence.[8]  It would also not be a peculiar coincidence if the IRS investigated the appropriateness of First Baptist Orlando’s tax exempt status.  According to the IRS, “Under the Internal Revenue Code, all section 501(c)(3) organizations are absolutely prohibited from directly or indirectly participating in, or intervening in, any political campaign on behalf of (or in opposition to) any candidate for elective public office. Contributions to political campaign funds or public statements of position (verbal or written) made on behalf of the organization in favor of or in opposition to any candidate for public office clearly violate the prohibition against political campaign activity.  Violating this prohibition may result in denial or revocation of tax-exempt status and the imposition of certain excise taxes.”   Carson’s sermon at First Baptist Orlando resembled political speech-making more so than biblical preaching.  Surely the IRS would like to get its hands on the millions of dollars that pour through the church’s coffers each year.  Had Carson spoke at the SBC Pastor’s Conference, the IRS may have have had cause to investigate and revoke the tax-exempt status of the Convention itself.[9]  Further millions pass through the Southern Baptist Convention each year, notably to its Washington DC Lobbying Arm known as the Ethics and Religious Liberty Convention.

Thoughtful Southern Baptists should review the speakers lineup at the SBC Pastors conference and ask themselves if this conference is something they should be paying for with God’s money.  Year after year, Southern Baptists send in millions to fund the convention.   Year after year, the money is put in the control of publically connected megapastors like David Uth.  Christians should take a moment and reflect on the early church and the wisdom of continuing to fund certain activities of the Southern Baptist convention.  There were no megachurches.  The Apostle Paul was not out to take over the Roman Government.  In his sermon at First Baptist Orlando, Ben Carson lamented that America is moving towards being run by an elite group of self-proclaimed experts who believe that they know better than everyone else what’s best for everyone else.  The actions of these experts are crowding out the middle class and placing power in the hands of those at the top of the political spectrum.  In my mind, Carson could have been talking about the state of the SBC.  The convention is becoming more and more controlled by growth-expert megapastors whose massive campuses and massive budgets squeeze out smaller churches.  The irony of Carson speaking about elitists from the pulpit of a megachurch was all too apparent.

Faithful Christians should reconsider their citizenship.  Our citizenship, wrote the Apostle Paul, is a heavenly one.  It’s time the faithful members of the remnant of Christ’s church reclaim their role as Ambassadors of Christ and not political pawns of the GOP-machine.  We don’t need the devil’s people to make our appeal.  Our appeal is not for a life free of persecution in this earthly kingdom but a life surrendered to Jesus in His heavenly one.  I adjure the Christian reader of this message to consider if your concerns and those of your church are properly grounded in scripture or your own American ideal of freedom.  True Freedom is found inside the will of God.

[1] Well, not for Carson, he’s a Seventh Day Adventist.

[4] It’s important to note that, in Baptist polity, the denomination has no authority over the decisions of local churches and their pastors, even bad ones.  The denomination, as whole, clearly feels that an invitation to Carson to speak is inappropriate, yet those outside of FBC Orlando do not have the right to discipline Uth or his autonomous local church.

[5] The Church of Christ which the Duck Dynasty clan attends believes that water baptism is necessary for Salvation rather than believing that it is as a public profession made after salvation as the bible teaches.

[6] Dr. Page Brooks, a veteran and respected theology professor has written about this phenomenon here.

[7] This is the incident which made him a hero to conservatives.

[8] Carson’s tax records were found to be an order.

[9] The reader should keep in mind that I am state-certified Public Accountant who has prepared tax returns professionally and taught Federal Income Tax courses at the college level.  I speak from a position of authority on this subject.

How Should We Respond to the Horrific Church Shooting in Texas?