“Earth Day has never been a celebration of the beauty and bounty of this awesome terrestrial ball.  It’s always been an assault on man.” – Brian Sussman

Who began the not-so-secular holiday known as “Earth Day”? Three people are credited with the movement, including Gaylord Nelson (a Democratic politician from Wisconsin with a past in Marxist activism, and one of the Senate’s first environmentalists), Dennis Hayes (who is often called the “founder” of the Earth Day movement, an associate of Nelson, whose Bullitt Foundation is dedicated to ensuring the Pacific Northwest is the most “progressive” region in the nation), and Stanford University professor, Paul Ehrlich (who wrote the infamous Population Bomb, which advocated extreme efforts to limit the earth’s population and made ridiculous false prophecies that never saw fruition).

What you need to know about the methodology and purpose of Earth Day and its origins is the 1960’s era, protest-fueled “teach-in.” As social-progressive (and in some cases, Marxist) activists developed their strategy for cultural change, a key part of that strategy was claiming the university systems and commandeering education. The teach-in was a central part of that strategy. Essentially, instead of university professors going on strike, they would have a “teach-in” as a means of protest and indoctrinating anyone who cared to listen. The first “teach-in” was held at UC Berkley in 1965 to protest “American Imperialism” and the Vietnam war. It was the teach-in that brings Gaylord Nelson first into the origins of Earth Day, as Nelson was one of the chief masterminds and proponents of the teach-in.

It was to Gaylord Nelson that Dennis Hayes reportedly said in 1969, “My G__ — why not a national teach-in on the environment?” From this comment came “Earth Day,” celebrated first on April 22, 1970. But from the very beginning, it was recognized by even the casual observer that Earth Day was not just about the environment, but about a progressive, liberal (and yes, in some cases, Marxist) agenda. This clip is from the New York Times in its first-ever coverage of Earth Day, April 21, 1970 (click graphic below for hyperlink to article). Notice, the teach-in included some “deeper currents” ranging from ending the Vietnam war to racial friction, the “underprivileged,” and a “no-growth” (anti-Capitalist) society. 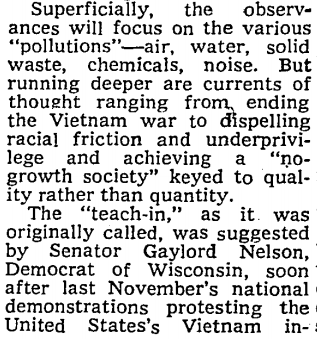 Essentially, “Earth Day” is a massive, world-wide “teach-in” where the masses will be taught what the progressivist educators want you to know. You will be assimilated.

When Earth Day first began, it received resistance not only from evangelicals, but from capitalists. The liberal, America-hating and socially-progressive womb from which the teach-in movement began, and which eventually gave birth Earth Day, was and is intrinsically tied to the labor movement. Dennis Hayes, the coordinator for the first Earth Day, said of the extremely progressive United Auto Workers Union that without their support and push, it “would have flopped” (source). The UAW donated much money, printed and mailed the fliers, and provided logistical support. When Gaylord Nelson announced that this socially-progressive womb had conceived the idea for Earth Day, he announced it first to the AFL-CIO.

It sure is interesting that unions – that exist to protect their employees jobs (in theory) – have been the biggest supporters of an environmentalist movement that, if successful, would kill American industry. So why is that? It’s because they know what everyone else knows…Earth Day has never been about the environment. It’s about a movement. And, it’s a movement that socially-progressive (and in some cases, Marxist) labor unions whole-heartily agree with on a political level. Earth Day was not a movement for conservatives, people knew from the very beginning, as one Cleveland paper‘s headline spoke of “Hippies and Housewives Unite to Protest What Man is Doing to Earth.”

Fast forward forty-five years and you’ll see evangelicals embrace the socially-progressive teach-in. Some have suggested that certain Christians “sitting out” of Earth Day celebrations has something to do with being skeptical of climate science. And, well…there is that. Sometimes it’s hard to keep up with the latest predictions and remember if we’re to be afraid of ice ages or global warming, if the ice caps are melting if they’re growing, and something about polar bears that can’t swim.

And so while it’s true that Christians – like many rational people – have a hard time believing climatologists can predict the weather a hundred years from now who can’t accurately predict the forecast for tomorrow, it’s not about being skeptical of the science, per se. Rather, it’s about being skeptical of the socially-progressive and Marxist-driven, anti-industry movement which underlies and propels all the pageantry and hoopla of this holiday that seems to position man in the place of God as savior. We recognize propaganda when we see it. That’s the real issue. And then, on top of that, is the really bad science, ridiculous predictions, economy-stifling “solutions,” and finger-wagging, shaming of the first world on account of using two-ply toilet paper when one-ply will do.

But nonetheless, some evangelicals are eager to prove that there is no bandwagon they will not jump on in the name of Jesus. The United Method Church was the first to jump on the alternative energy-powered bandwagon:

“I think our churches should be the first to push the envelope in terms of reducing our carbon footprint,” Molly Harper Haines, 27, told the United Methodist News Service. “If every church ‘got off the grid’ by installing solar panels or using wind energy (for example), had community gardens to grow food and flowers for decorations … the world would be a different place” (source).

Of course, we can expect churches like the UMC or ELCA or the American Baptists to jump on this issue. Not only are they in-line with the ideology from which Earth Day has sprung, but it’s a pleasant distraction from the Gospel, which these progressive mainstream denominations seem intent on not proclaiming. The “liberal” denominations, however, are not alone. It seems that Gaylord Nelson’s sit-in has other Christians eager to take part in the lecture to the rest of us.

Since 1970, April 22 has been dubbed Earth Day, a day of global emphasis and celebration of environmental stewardship. Many Christians participate in Earth Day festivities, but many others aren’t sure how to think Christianly about this issue and whether or not environmental concern is, as it is often portrayed, a “liberal” or “progressive” concern.

Calling Earth Day an emphasis on “stewardship,” cloaking it in Christianese, hardly changes this holiday’s origins. And the fact is, the real history of Earth Day is – most definitively – a “liberal” and “progressive” origin. Period. It’s not simply “portrayed” as such. It is such.

Moore then goes on to make all the same arguments that have been made before by those mainstream Protestant denominations that went down this road thirty years ago. Essentially, Moore asserts that God made the world, and so as stewards we should protect the world and its resources. Moore even breaks out the talk of “dominion” and sounds a little post-millennial as he eludes to what some call a “dominion mandate” going back to Genesis 3. And then, Moore ends with this…

So should Christians care about Earth Day? Yes.The contemporary environmentalist movement has often been flawed and clumsy and sometimes evil, as any movement made up of fallen sinners tends to be. But, at the core of it, is a concept Christians ought to recognize. It is that of creatureliness, and dependence, and longing for the permanent things. And in the face of an earth often ravaged by human sin and rapaciousness, Christian creation-care can be a call to the kind of ultimate accountability that only makes sense in a Christian story of the universe.

What Moore seems to overlook is that Christians can care about conservation and stewardship (neither of which are sinister or inherently Marxist or socially progressive, but Biblical) without celebrating this not-so-secular holiday with wicked origins and an even-now anti-capitalist, socially-progressive and anti-human agenda and being championed and celebrated by those who are anything but enemies of our liberties. Environmentalism, more than any other mantra or agenda, is used to curtail and diminish our individual civil liberties. As the head of the SBC’s Ethics and Religious Liberty Commission, I’d like to think Moore gets that. But in his use of the term “Creation Care,” we see in what ideological stream Moore is wading.

The term is “evangelical environmentalism” and is championed by the most socially-progressive “Christians” in our culture. Coalescing around the Evangelical Climate Initiative (which asserts man-made climate change and makes dastardly predictions for our future), the evangelical environmentalists have coined the term they espouse, “Creation Care.” The National Association of Evangelicals and others have bought this notion, and have even lobbied congress for news laws in relation to carbon emissions (because that’s how Jesus would have us spend our time). The first use of the term “Creation Care” was coined by the progressivist agenda-driven group, “Evangelical Environmental Network” (creationcare.org) and was first in print in a 1978 article in the Indiana Gazette for the intent of making “environmentalism” sound more Christian.

Of this term, the Dictionary of Christianese says:

“Creation Care” sounds like it could be a brand name, and in a way it is. It’s a sly evangelical euphemism for the word “environmentalism. Christians on the conservative end of the political spectrum can give a hoot and not pollute. No stretch of the imagination there. But what these green-minded fundagelicals might also do is never, ever, ever use the word environmentalism to describe their heartfelt save-the-planet activism.

Hey, care for “creation.” Be a steward. But you don’t have to jump on every single socially-progressive bandwagon to be well-liked by people that, by and large, hate Jesus. It’s not the holiday of evangelicals who want to remind us to conserve resources for the next generation. It’s a holiday coinciding with Lenin’s birthday, started by three socially-progressive and pseudo-Marxists who decided a “teach-in” on their brand of environmentalism is what the world needed.

On the Theonomy Debate Recording

Yesterday, Mark Wingfield at Baptist News Global published an article entitled “Sills lawsuit misrepresents a piece of evidence, and that