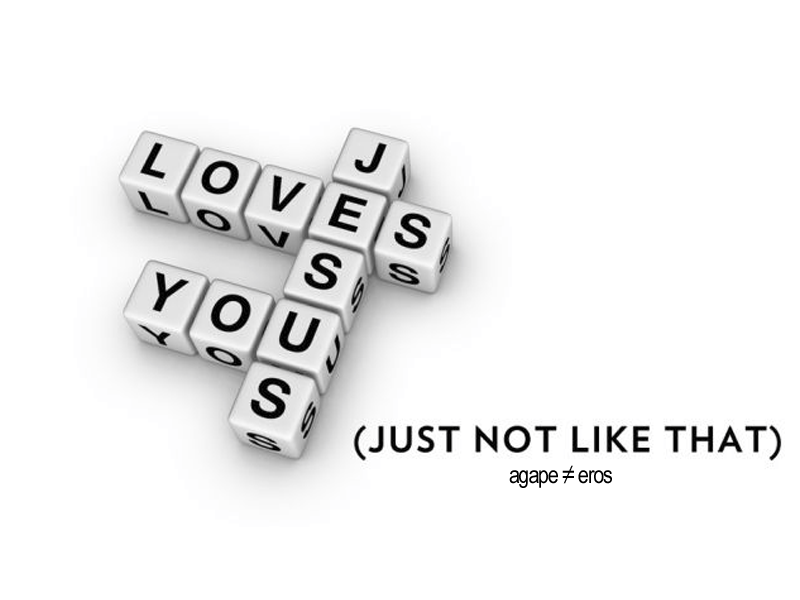 “All right, guys, this going to be so easy. All we have to do to make Christian songs is take regular songs and add Jesus stuff to them. See? All we have to do is cross out words like ‘baby’ and ‘darling’ and replaced them with ‘Jesus’” Eric Cartman, South Park

McMilan’s song uses such imagery poetically to refer to the love of God, but it is hardly clear that such love is an agape love. McMilan’s song, like Palmer’s, is not an appropriate song for church. Yet it is. It is also blared across the airwaves by Christian radio stations. It’s simply profane. God is described as an overwhelming hurricane who bends an unwilling lover to His will. (This is not the type of irresistible grace studied at the seminary.) The singer of this song, in corporate worship, takes on the effeminate position of a girl who gives up on resistance and lets her romantic pursuer reach second base. It’s the Christian equivalent of Belinda Carlisle’s “I Get Weak.

It’s hard to watch the above video from a Belinda Carlisle concert and not recognize the secular production values that have found their way to many a church stage. (I say “stage” instead of altar or pulpit because a stage is the proper place for entertainment.) Hymn books have been replaced by lyrics projected on a screen and sometimes over an animated backdrop. Note the video playing behind Carlisle, the stage lighting, and the fog being pumped in behind the band. Carlisle’s gyrations and hand movements are conspicuously reminiscent of the “praise hands” raised in many a congregation at the behest of “worship leaders”. It’s easy to apply the Eric Cartman formula for making Christian music to Carlise’s hit song. Replace “baby” and “lover” with “Jesus” and what’s left is a song about a Christian in awe of God’s power. It’s worth pointing out that “I get Weak” was included on Carlisle’s album Heaven on Earth.

Sadly, “How He Loves” is not an isolated case. It is one of countless “Jesus is my boyfriend” songs written for performance in Christian environments. For another example, consider Kari Jobe’s “The More I See You in which she sings:

I want to sit at your feet
Drink from the cup in your hand.
Lay back against you and breathe, feel your heart beat
This love is so deep, it’s more than I can stand
I melt in your peace, its overwhelming

Unfortunately, eroticism has found its way from the music rack at the Christian bookstore to the devotional reading section. Popular author Anne Voskamp writes of flying to Paris and “making love to God.” Best-seller Sarah Young, writing as Jesus in the first-person, penned the statement, “Never take for granted my intimate nearness. Marvel at the wonder of My continual Presence with you. Even the most ardent human lover cannot be with you always. Nor can another person know the intimacies of your heart, mind, and spirit. . . I, the Lover of your soul, understand you perfectly and love you eternally.”

“His eyes are a flame of fire, and on His head are many diadems; and He has a name written on Him which no one knows except Himself. He is clothed with a robe dipped in blood, and His name is called The Word of God.” Revelation 19:12-13 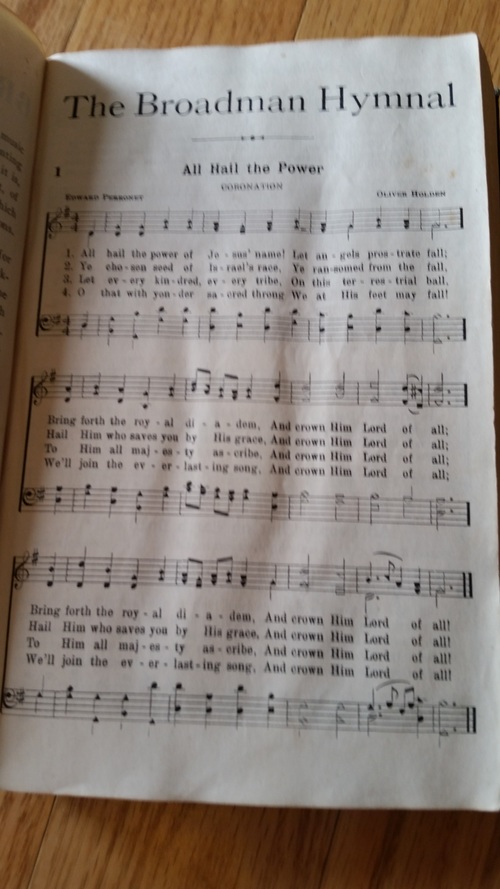 From my Broadman Hymnal

The first hymn listed in the Broadman Hymnal is packs an in-depth theological punch in its four short stanzas “All Hail the Power” is biblical and God-honoring. It is a worship song that speaks to kingship of Jesus Christ, the salvation of His church, the power of the gospel to every nation, and the eternity of God’s kingdom. There are not allusions and metaphors to be misinterpreted. When men and women sing this song, they sing the message of Scripture. The four stanzas are below examined:

All hail the pow’r of Jesus’ Name!
Let angels prostrate fall;
Bring forth the royal diadem,
And crown Him Lord of all!

As the book of Revelation 4 and 19 present, heavenly beings fall before King Jesus. His name is called “the Word of God.” He is the most glorious being in universe and rules with unassailable power.

Ye chosen seed of Israel’s race,
Ye ransomed from the fall,
Hail Him Who saves you by His grace,
And crown Him Lord of all!

Genesis 3 tells the story of mankind’s fall into sin. Romans 5, Matthew 20, 1 Timothy 2, tell the story of how Jesus ransomed mankind. Jesus paid for the sin of mankind and redeemed humanity from the fall. The Father gave Jesus a chosen people, the church. Romans 11 explains that gentile Christians have been grafted in to the nation of Israel. Galatians 3 describes how all Christians are heir according to the promise that God made to Abraham. All Christians, ransomed by the risen Lord Jesus, are saved, according to Ephesians 2, by the grace of God.

Let every kindred, every tribe,
On this terrestrial ball,
To Him all majesty ascribe,
And crown Him Lord of all!

Jesus commissioned His ransomed people to make disciples out of every nation, according to Matthew 28. Galatians 3 explains that in God’s church men and women of different ethnicities are brothers and sisters in Christ; ethnic divides are no more. All live under the reign of King Jesus.

Oh, that with yonder sacred throng
We at His feet may fall!
We’ll join the everlasting song,
And crown Him Lord of all!

Revelation 7 tells of a great multitude that worships Jesus, falling at the feet of Jesus Christ in awe.

The reader should ask himself, “When was the last time all the songs sung in corporate worship sounded like this one?” This song was not written and produced by the Christian industrial complex. This complex follows the patterns and princples of the world. Industrial music and literature is largely purchased by teen girls (think Britney Spears, New Kids on the Block, Katy Perry, and Twilight).

Can the reader imagine Augustine, Martin Luther, John Calvin, or John Wesley ingesting the products of today’s Christian Industrial Complex? Emo praise songs, Jesus Culture, Heaven Tourism, Amish romance novels, Anne Voskamp, and Sarah Young are consumed by a visible American church will all the depth of a teenage girl swooning at an N’Sync concert. Where are the men and women hailing the power of Jesus name?

A Personal Reflection: Breaking the Addiction in the Bride of Christ

I love to sing about the love of God. I love to tell His story, “’twill be my theme in glory” as the song goes. I also know I’m not the only one who feels this way about the femininzation of the church and the worldliness of “worship songs”. Others have written about this; I’m not the first. (Even the pagans who write and produce South Park noticed the problem.) This is not an objection to one type of music versus another. It is not hymns versus contemporary. It is not old versus. new. In all cultures, across all time, good music is just good music. The concerns here are spiritual vitality and theology. Too many people from too many churches have told me that they’ve been unable to sing a certain song in church because of its theological or lyrical content.

I suggest to you that if “boyfriend Jesus” or theologically shallow songs are being played at your church, that you lovingly approach your elders with a Bible in one hand and humility in the other, and express your concerns. Do not complain to the congregation. Do not start a church fight. Go to the leadership; be mature. At the same time, there’s no reason for you to quietly stand and silently endure thirty minutes of Christian MTV. Sit quietly and read your Bible. What’s the point of standing if you’re not singing? Make sure you are clear, when you approach your elders, that your concern is not style or newness. Be clear that your concern is biblical and spiritual. Many church leaders just don’t know what worldy music looks like, having never been to a Robert Palmer concert. Many church leaders read mostly commentaries and may be unaware of the erotic devotionals the Christian industrial complex is selling to the women of their churches…but you do.

Now, go and do something about it. Go be salt and light. Go worship your King.

Who is the worst Christian of 2021? On the surface, this seems like a foolish or even pharisaical question. The

Nominees: The Worst Christian of 2021