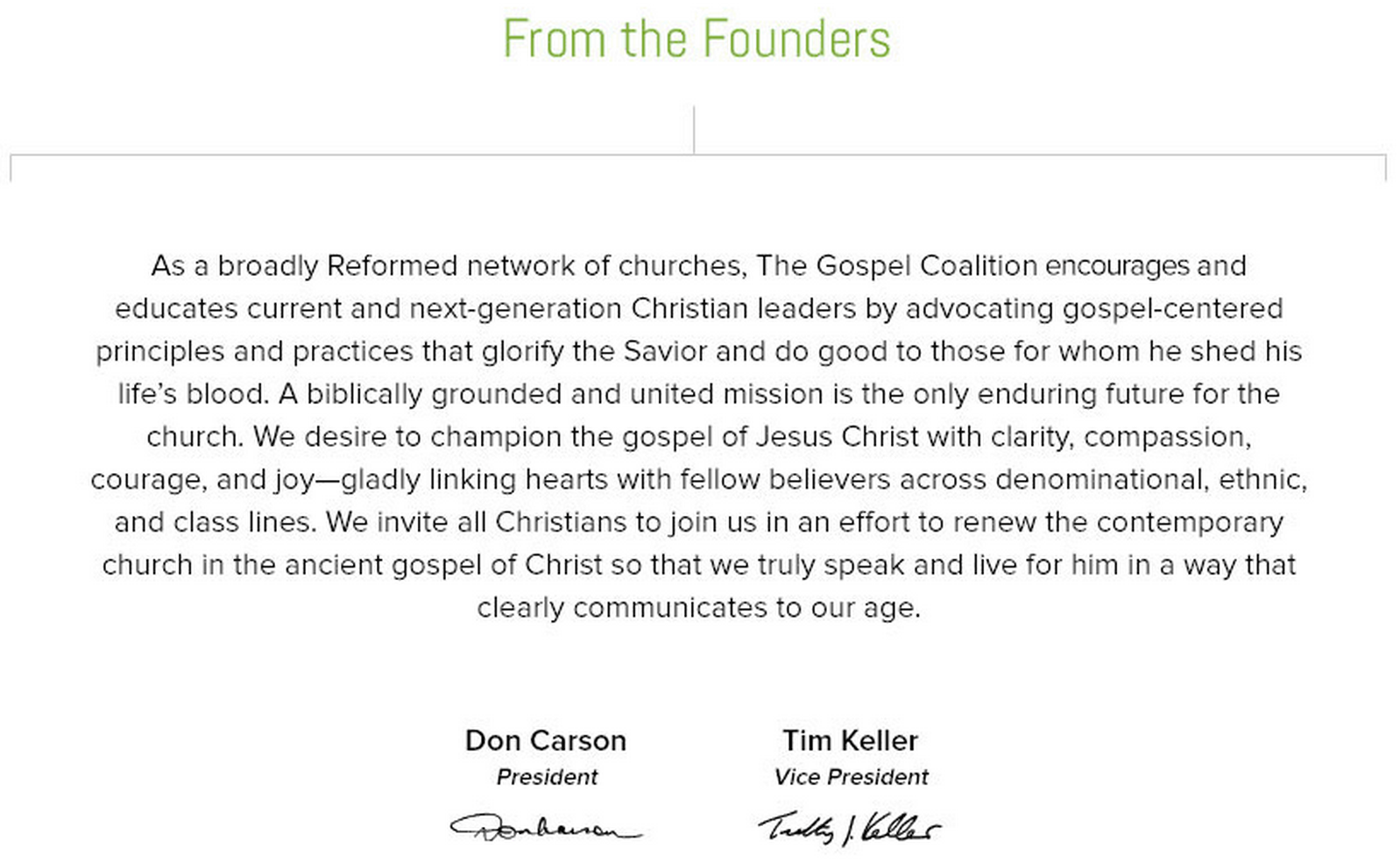 In a post today, the Gospel Coalition laid out a defense for their inviting of TGC15 panelists who do not believe, well…the Gospel. Following the trend set by evangelical heavy-hitters including the SBC’s Ethics and Religious Liberty Commission and others, The Gospel Coalition is capitalizing on the controversy in Ferguson, Missouri to focus on social justice and race issues.

An important time to discuss Gospel-centered solutions to the sin-saturated problem of racial divide, TGC has accumulated the world’s finest Gospel preachers to exegete pertinent Biblical texts in relation to the unity of all believers in Christ and the importance of forgiveness for bigotry in light of the propitiation of such sins on the cross.

Just kidding. No, TGC is instead inviting a “diverse [non-Christian] set of voices for a panel discussion about justice and race.” And by “justice,” I think we all know what that means (but we’re not supposed to mention those connotations). Speakers include a criminologist, college professor, assistant U.S. attorney, a music producer and chief of police. Of the panel, TGC says…

Not everyone on the panel is an ally—that is, a born-again Christian with whom we can go “a long way down the road.” All, though, are co-belligerents—that is, people committed to promoting justice in our neighborhoods, building trust between law enforcement and our communities, and finding a place for local churches to play a role in racial reconciliation efforts.

The author of the article, Bethany Jenkins, likens these co-belligerents to “colleagues with whom we work toward a common organizational goal, but with whom we disagree about issues of faith.” Jenkins even quotes the quotable and esteemed Dr. Albert Mohler like a dare, in case someone would be so bold to argue with the point (can you even be Reformed and disagree with Mohler?)…

We must be ready to stand together in cultural co-belligerence, rooted in a common core of philosophical and theological principles, without demanding confessional agreement or pretending that this has been achieved.

Checking the source, we find that Mohler would be as unlikely to approve of this quotation being used in this way as he is unlikely to publicly say something negative about The Gospel Coalition. Of course, the SBC’s ERLC and Mohler’s cohort, Russell Moore, has been moving toward an uncomfortable partnership with the Roman Catholic Church in recent years (Moore raised a number of eyebrows, publicly calling for the Pope to be named Time Magazine Man of the Year), taking part in the Vatican’s recent summit on human sexuality and other hand-shaking gestures that rightly make still-protesting Protestants a little nervous. Being entangled in a growing SBC ecumenism (or at the very least, ecumenism-lite), Mohler may be hesitant to speak out, but the above quotation is from the Touchstone journal and used out of context. In the article, Mohler derides ecumenism between Catholics and evangelicals and derides the Evangelicals and Catholics Together document. And while Mohler endorses a “cultural co-belligerancy,” notice what Mohler says in the quotation above…

We must be ready to stand together in cultural co-belligerence, rooted in a common core of philosophical and theological principles, without demanding confessional agreement or pretending that this has been achieved (emphasis ours).

Could someone remind us of what our “common core of philosophical and theological principles” are with non-believers, please?

Of course, it could be argued that fairness, equality, and forgiveness are values held by non-believers – even though they are values that essentially hail from a Christian worldview. We could be co-belligerants with atheists or agnostics on culture issues, the argument could be made, because they have the capacity to share these basic theological tenets while yet denying the Scripture and God from which they came.

Oh, there may be good thoughts. But they won’t be Gospel thoughts. We watched with great sadness as Russell Moore and Thabiti Anyabwile, in the days following the Ferguson verdict, championed legal mandates for officers to wear Go-Pro cameras. A good suggestion that might be, but it’s not a Gospel solution to a sin problem. And frankly, that’s what the problems laced in the socially-progressive terms of “racial reconciliation” and “social justice” need – the Gospel. You know…from the Gospel Coalition.

Thank you, evangelical intelligentsia, for demonstrating to the world that we haven’t really a clue as to the real problem or real solution. This is the so-called “whimsical” approach to cultural engagement championed by Ed Stetzer. This is beyond the ecumenism of Eric Teetsel and the Manhattan Declaration. This is actually going to professed unbelievers, and asking them to help us – the church – understand the problems and solutions to a Gospel issue. And quickly, so it seems, the Gospel Coalition is just becoming The Coalition.

The collective leadership of TGC are going to have to decide which is more important: the Gospel, or the Coalition.

In the mean time, the screenshot from TGC website above, says that the purpose of the organization is to “link hearts with fellow believers.” Maybe, just maybe, they should stick with that.